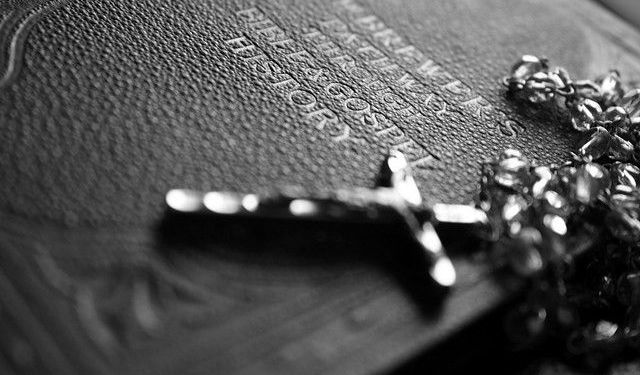 Image by LBG Photography on Flickr under Creative Commons License.

Due to its past as an English colony, Richmond has a number of notable Anglican and Episcopal churches dotted around the city. Take our two-part tour to discover these beautiful buildings as well as many other places of worship in Richmond.
How it works: Download the app "GPSmyCity: Walks in 1K+ Cities" from iTunes App Store or Google Play to your mobile phone or tablet. The app turns your mobile device into a personal tour guide and its built-in GPS navigation functions guide you from one tour stop to next. The app works offline, so no data plan is needed when traveling abroad.

The Bethelem Lutheran Church is a wonderful red-brick church building of Neo-Baroque architectural style. Dating from 1852, it has been the site of Sunday services in the heart of downtown Richmond for many decades.
Image by PinkMoose on Flickr under Creative Commons License.
2

St. John's United Church of Christ is a historic church in Richmond. It was founded as 'Saint John's German Lutheran Evangelical Church' and was called St. John’s Evangelical and Reformed Church from 1943 to 1962.

The congregation formed in 1843 to minister to the very large German immigrant population of Richmond (especially the Carver neighborhood) at the time. The name "German Lutheran Evangelical Church" was selected as its members were Lutherans, but the church has never been affiliated with any Lutheran denomination. It operated independently until 1874 when it affiliated with the German Evangelical Synod of North America, a predecessor of the United Church of Christ.

After meeting in member homes for several years, the congregation moved into a new church building on North Fifth Street at Jackson in 1847. It moved into a larger building in 1881, and into its current facilities in 1928. The church houses one of the three remaining intact EM Skinner pipe organs on the East Coast of the United States. One prominent member of St. Johns was Conrad Frederick Sauer, whose family-owned CF Sauer factory exists nearby on Broad Street to this day. Virginia Governor Mills E. Godwin Jr. and his family were members of this congregation during his first term. St John's was also influential in forming the Gesangsverein Virginia, or "Virginia" German singing society that was a pillar of Richmond's German community and still exists today.

Image by Hans Burgkmair the Elder on Wikimedia under Creative Commons License.
Sight description based on wikipedia
3

Dating from 1869, St. Mark’s Lutheran Church also derived from the immigrant German Lutheran community. In 1876, the name was changed to First English by members of the congregation to set the church apart from two others in the city that held services in German. In 1911, a new church was founded at Stuart Circle on Monument Avenue at the western edge of the city.
Image by Vicenç Feliú - Sabreur76/Flickr.com on Flickr under Creative Commons License.
4

The Grace Covenant Presbyterian Church started as a congregation in 1790. At that time worshippers used the as yet uncompleted Virginia State Capitol building as their gathering place. Later located at Park and Harrison, the church is now based at new buildings on Monument Avenue.
Image by Jason Collins | www.deliriousphotography.com on Flickr under Creative Commons License.
5

Situated in Virginia's historic Fan District, the Tabernacle Baptist Church has been around for 120 years. This centrally-located church mixes urban ministry with vibrant tradition.
Image by hasby on Flickr under Creative Commons License.
6

The Commonwealth Chapel is an Assemblies of God church that draws followers from many different religious backgrounds. This community centered on Jesus Christ believes in fostering hope, restoration and health through worship and prayer.
Image by taberandrew on Flickr under Creative Commons License.
7

First Baptist Church is an historic Baptist Church in Richmond. Lott Carey and Collin Teague were associated with this church. Established downtown in 1780, it is currently located on the corner of Monument Avenue and The Boulevard. Current Senior Minister is the Rev. Dr. Jim Somerville, former pastor of the First Baptist Church of Washington, D.C.

First Baptist Church offers two traditional Sunday services, the one at 11:00 am being broadcast live on a local ABC television station. Most aspects of the church reflect traditional Baptist churches including Sunday school prior to worship and evening bible studies throughout the week. The music during worship is several hymns, an offertory song and a choral anthem. Other music that may be added is children or youth choir, English handbells or various soloists on instruments. Wednesdays offer a meal and activities for everyone. The Youth Group takes up the whole third floor and is 8th to 12th graders. There are usually a minimum 50 people a Sunday.

One of the most fascinating aspects of Richmond is its glorious past as the Confederacy's capital. If you are a history buff you’ll love taking this unique tour, which includes all the main sites in the city associated with the American Civil War.

Richmond is famous for its many architectural and historical landmarks, but it is also a vibrant center for the arts. Take our Cultural Tour to discover the wide variety of theaters, opera houses and other cultural venues that make up the Richmond arts landscape.