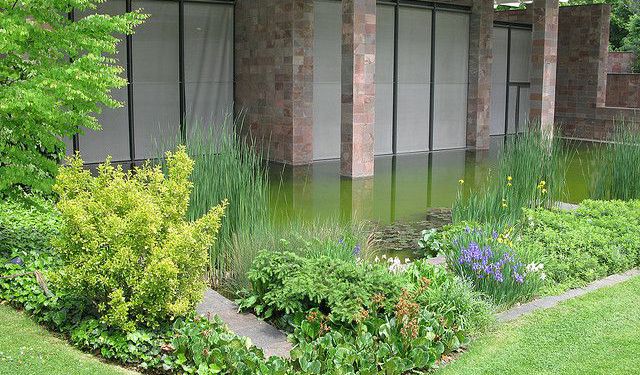 Image by MACSURAK on Flickr under Creative Commons License.

Riehen in Basel (Self Guided), Basel

Despite Riehen being a small municipality, the territory is covered with a large number of interesting buildings as well as entertaining attractions. Thus, this tour guide is completely reserved for Riehen and the many exciting ventures you may observe during your stay.
How it works: Download the app "GPSmyCity: Walks in 1K+ Cities" from iTunes App Store or Google Play to your mobile phone or tablet. The app turns your mobile device into a personal tour guide and its built-in GPS navigation functions guide you from one tour stop to next. The app works offline, so no data plan is needed when traveling abroad.

The Beyeler Foundation or Fondation Beyeler with its museum in Riehen, near Basel, owns and oversees the art collection of Hildy and Ernst Beyeler.

The foundation opened its doors on October 18, 1997, presenting 140 works of modern classics, including 23 Picassos. The overall collection of 200 works of classic modernism reflect the views of Hildy and Ernst Beyeler on 20th-century art and highlight features typical of the period from Claude Monet, Paul Cézanne and Vincent van Gogh to Pablo Picasso, Andy Warhol, Roy Lichtenstein and Francis Bacon. The paintings appear alongside some 25 objects of tribal art from Africa, Oceania and Alaska. A third of the exhibition space is reserved for special exhibitions staged to complement the permanent collection.

The culmination of Beyeler's career came in 2007 when all the works that passed through his hands were reunited at the museum for a grand exhibition that included van Gogh's 1889 Portrait of Postman Roulin, Lichtenstein's Plus and Minus III and a huge expressive drip painting by Jackson Pollock.

Operating hours: Monday – Sunday: 10 am – 6 pm.
The museum is open on Sundays and on all public holidays.


Image by Tobias Helfrich on Wikimedia under Creative Commons License.
Sight description based on wikipedia
2

Sarasinpark is a big, 1,200 square meter park from the 19th century. Located directly across from Fondation Beyeler, the land was once used for agricultural but is now fully open to the public. If you are searching for a quiet place of leisure, than Sarasinpark is sure to be one of your most ideal options.
Image by knickinoptik on Flickr under Creative Commons License.
3

Galerie Lilian Andrée is a contemporary sculpture and painting art gallery located next to Gallery Mollwo. Here, you will admire an artist attempt to create something splendid out of a very diverse range of materials, including but not limited to wood, paper, metal, rocks, leather and glass. Famous artists like Ernst Baumann, Yves Boucard, Lorenz Grieder and Kurt Weber have all exhibited work at Galerie Lilian Andrée.
Image by ellenm1 on Flickr under Creative Commons License.
4

Kunstraum is an art gallery centered on the exhibition and promotion of young artists. Here you will find amazing art from locals, including gorgeous paintings, sculptors and photographs. Kunstraum is located in a renovated 18th century building. Since 1998, the gallery has offered six showrooms, each with a different character and theme.
Image by Wolfsraum on Flickr under Creative Commons License.
5

Spielzeugmuseum, Dorf- und Rebbaumuseum is a village and toy museum owned by Johann Rudolf Wettstein. The unique venue opened to the public in 1972. The museum offers a large collection of ancient toys such as dollhouses, railroads and wooden toys while the other two sections focus on commercial and industrial products as well as wine-growing.
Image by Peter Berger on Wikimedia under Creative Commons License.
7

St. Martin Dorfkirche is the central church of Riehen. Utilizing late Gothic style elements, the church was completed in the 12th century and could even date back to the 10th century. The forty meter high structure is one of the highest buildings in Riehen.
Image by Sämi Leder on Wikimedia under Creative Commons License.
8

Kirche Saint Franziskus is a modern protestant reformed church. The architect who worked on the design of the church was Fritz Metzger. The tower of this special church is visible from a long distance and a must-see if you like to admire churches. The church is very popular both among locals and tourists.
Image by dawnzy58 on Flickr under Creative Commons License.

As previously examined in the first part of Basel's famous museums, visitors were able to experience the fantastic history, culture and heritage of this amazing city. We continue our examination of the best museums in Basel in part two, offering tourists a chance to visit Museum of Pharmacy, Natural History Museum, Dollhouse Museum, Music Museum, Sports Museum of Switzerland and much more.

Basel is a city with numerous opportunities for children to be entertained. The boys will surely be delighted by all the running and climbing at a venue like Schützenmattpark, while the girls will enjoy the enormous dollhouse. Then, there are the locations for both sexes including The Botanical Garden, toy shop and zoo.

Straddling the river Rhine in the northwest part of Switzerland on the very border with France and Germany, Basel is renowned for its numerous historic sights. The most notable of them include medieval Marktplatz in the city center, dominated by the 16th-century, red-sandstone Rathaus (Town Hall). The city's 12th-century Gothic cathedral (Basel Münster) is a major local landmark and a burial...  view more

Unlike the other part of Basel sitting on the left bank of the Rhine, the city's right bank is dominated by old buildings and, as such, represents a great deal of interest to the history and architecture buffs, as well as those keen on medieval European heritage. If you're one of them, follow this walk and discover the sights of the right-bank part of Basel!

The churches of Basel are important cultural, religious and architectural elements of the city. The architecture is especially sacred, considering that despite most of the congregations being Catholic, the styles and design remain different. Some, for example, are constructed in a modern style, while others reflect the more ancient designs. Take a tour down the religious edifices of Basel today!

Basel is a city with a very busy and exciting nightlife. The selection of nightclubs, discos, strip bars and lounges is incredibly diverse and will satisfy individuals of any taste. Night spots inside the city are often crowded (locals and tourists alike), so make sure you arrive early and stay late!