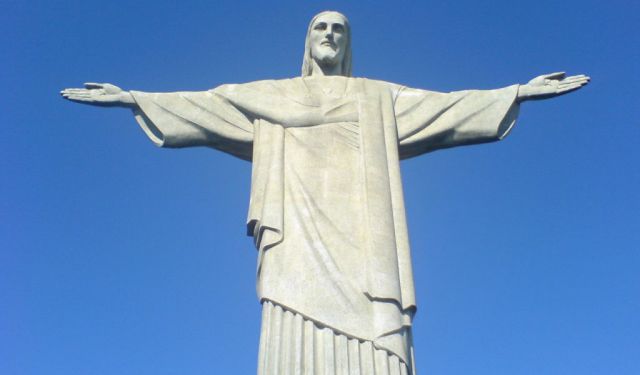 Rio de Janeiro can proudly boast of a number of landmarks that will impress even the most well-travelled visitor. This huge city, rich in culture and history, offers marvelous scope for sightseeing. Here's our rundown of spots you should definitely visit during your time in Rio.
How it works: Download the app "GPSmyCity: Walks in 1K+ Cities" from iTunes App Store or Google Play to your mobile phone or tablet. The app turns your mobile device into a personal tour guide and its built-in GPS navigation functions guide you from one tour stop to next. The app works offline, so no data plan is needed when traveling abroad.

1) Monument to the Brazilian Armed Forces

This monument to the dead of World War II is popularly known as the Monument to the Brazilian armed forces. It honors and keeps the memory of the Brazilian soldiers who died in battle and were buried in the Cemetery of Pistoia in Italy during the conflict.
Image by fernando_dallacqua on Wikimedia under Creative Commons License.
2

The exhibitions of the Museu de Arte Moderna do Rio de Janeiro are made up of significant works by 20th-century artists. The museum's collection represents a comprehensive and sophisticated display of the artistic evolution of the last century, both inside and outside Brazil. Home to some 4,000 photographs by Brazilian photographers as well, the museum's building is all glass walls, so everywhere you look you'll also get a stunning view of the beach.

Why You Should Visit:
To experience experimental art exhibits, together with exciting beautiful jewelry and home accessories by the top artisans and designers working in Brazil today, which are sold in the shop.
The setting is lovely due to the museum being located on the waterfront in Flamengo Park which is lovely to walk through and has views of Sugarloaf Mountain.

Tip:
Don't miss the exhibits outside which you can see for free even if you are just passing by. Worthwhile to get a first impression.

In the urban landscape of Rio de Janeiro, Edifício Santos Dumont stands out from afar with its elegance and beauty. Built in 1975, this cylinder-shaped steel and glass skyscraper has 45 floors.
Image by Tom Junior on Wikimedia under Creative Commons License.
4

This trapeze-shaped square is marked by a monument erected in honor of Marshal Floriano. The region around Cinelandia Square (also known as Praça Floriano) resembles a Parisian district with its range of impressive buildings in the Eclectic, Neoclassical, Art Nouveau and Art Deco styles.
Image by jconde on Wikimedia under Creative Commons License.
6

7) Museum of the Estate of Heaven

The Museum of the Estate of Heaven (Museu da Chácara do Céu) brings together a number of paintings, drawings and prints by famous international artists such as Matisse, Modigliani and Degas. It also houses a great collection of Brazilian art, including maps and paintings from the 17th and 18th centuries as well as plenty of great works from the modern era.
Hours: Wed-Mon: 12:00-17:00.
Image by Herry Lawford on Flickr under Creative Commons License.
8

The Santa Teresa neighborhood is like a town of its own inside historic Rio. The district occupies a hill in the heart of the city and opens to a magnificent view over Rio. For decades it has preserved its old architecture from colonial Portugal and retains a bit of history on every corner.

The neighborhood came to be around the Santa Teresa Convent, built in the 1750s, on the Desterro hill. At the end of the 19th century, it became an area for the upper class, covered by its numerous mansions, many of which are still standing on the hill. Its narrow, winding streets are also home to the old trams – the only ones still running in Brazil, which give the neighborhood an added peculiar attraction.

Why You Should Visit:
Ideal if you're looking for a village-feel experience! Historic mansions and street art are the highlight but you will also find good restaurants, a few cafés, and crafts shops.
Image by Ptérodactyl Ivo on Wikimedia under Creative Commons License.

Rio is home to many places where you can feel the colonial times. Each of these exquisite buildings has its own architectural style, whether it be Colonial, Gothic or Neo-Classic and so on. Nowadays often home to cultural events, the classic buildings on this tour are a must-see for every visitor to Rio de Janeiro.