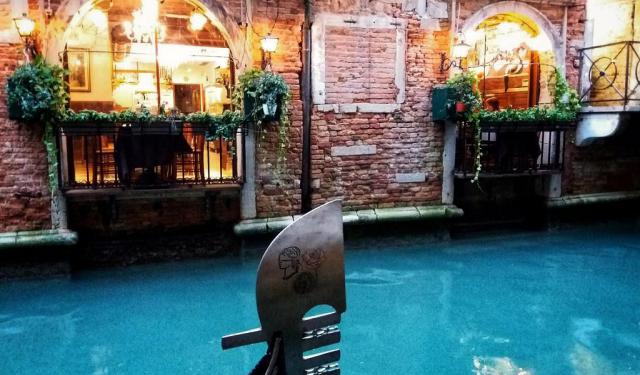 Image by Neticola on Flickr under Creative Commons License.

Getting to Sight #1. The first tour stop (Campo San Samuele) can be reached by: Water Bus: 1, 2, 2/, N
How it works: Download the app "GPSmyCity: Walks in 1K+ Cities" from iTunes App Store or Google Play to your mobile phone or tablet. The app turns your mobile device into a personal tour guide and its built-in GPS navigation functions guide you from one tour stop to next. The app works offline, so no data plan is needed when traveling abroad.

Located on the bank of Grand Canal, this square is home to some amazing palaces of great historical, architectural and cultural importance for Venice, such as the Palazzo Malipiero and the Palazzo Grassi, to name just two. Palazzo Malipiero was the temporary residence of the greatest Venetian lover of all times, Giacomo Casanova. In the center of the square stands the Chiesa di San Samuele, the church where Casanova was baptized.
Image by Reading Tom on Flickr under Creative Commons License.
Sight description based on wikipedia
2

Teatro La Fenice ("The Phoenix") is one of the most famous and renowned landmarks in the history of Italian theater and in the history of opera as a whole. Especially in the 19th century, La Fenice became the site of many famous operatic premieres at which the works of the four major bel canto era composers – Rossini, Bellini, Donizetti, Verdi – were performed.

Doesn't look like much from the outside, but that's because all you need is to step inside to be transported to the elite 14th-century royalty of Italy. Plan an evening watching a romantic ballet or live opera show with your loved one in this historic theater and it will be the highlight of your trip!

Why You Should Visit:
One of Italy's most treasured theaters, and for good reason!
The self-guided audio tour lasts around 15 mins; what will take you more time is taking pictures and admiring the intricate detail of the architecture.

Tip:
If you go on a tour while the theater hall is closed for a rehearsal, it might be best to reschedule for a later time when it is open, as that is where all of the grandeur lies.
For the cheaper tickets, it might be hard to see the stage, but you can stand and listen to the music if you fancy.


Image by Didier Descouens on Wikimedia under Creative Commons License.
Sight description based on wikipedia
3

The Chiesa di San Moisè (or San Moisè Profeta) is a Baroque style, Roman Catholic church in Venice. Initially built in the 8th century, it is dedicated to Moses since like the Byzantines, the Venetians often considered Old Testament prophets as canonized saints. It also honors Moisè Venier, the aristocrat who funded the reconstruction during the 9th century.

The elaborate Baroque facade, dating from 1668, is profusely decorated with sculptures, some of which are attributed to German artist Heinrich Meyring. The architectural design is attributed to Alessandro Tremignon, with patronage by Vincenzo Fini, whose bust is found over the entry door. Statues in public spaces were forbidden in Venice, thus by placing his bust on the facade of a church, he could circumvent this ordinance and display his wealth and his recent addition to the Libro d'Oro or Venetian aristocracy.

The interior is dominated by Meyring's huge and mannerist sculptural set-piece and altarpiece, depiction Moses at Mount Sinai receiving the Tablets, created by Tremignon and Meyring. Behind it is a canvas painted by Michelangelo Morlaiter. It also has a Washing of the Feet by Tintoretto, and a Last Supper by Palma il Giovane. The altarpiece of the Deposition (1636) was painted by Niccolò Roccatagliata in collaboration with Sebastiano.

This beautiful church is a popular wedding spot for both locals and tourists.

Opened in 1720 by Florian Francesconi and called by Napoleon "one of the world’s most beautiful drawing rooms", Caffè Florian is the oldest coffee house in continuous operation in Italy and the second oldest in the World (after Café Procope in Paris). Due to its prestigious position, it is almost a symbol of Venice; the meeting place of artists and poets, writers and politicians, including Wagner, Goethe, Lord Byron and also Casanova, who favored the Caffè Florian because it was the first establishment to permit the entry of women (whom he was always so eager to court).

Here, surrounded by local history, one can enjoy an amazing range of cakes and coffees, expensive and served by well-dressed waiters to tiny marble tables for two. The pleasure you get is definitely worth it; however, when the resident musicians are serenading (which is one of the reasons why you'd choose the caffè in the first place) be prepared for an additional €6 per person to be tacked onto your bill. The mood is calm and relaxing (other than the occasional birds that may come and harass) and you can request songs from the musicians.

Located on the rooftop terrace of Hotel Danieli, this restaurant serves an à la carte menu showcasing typical Venetian cuisine as well as traditional Mediterranean fare with a breathtaking view of Venice's Grand Canal and islands. Ask for the cocktail menu as they have an extensive list and really good cocktails. Spending an evening here with your loved one will surely be a most romantic and unforgettable experience of your Venice trip!