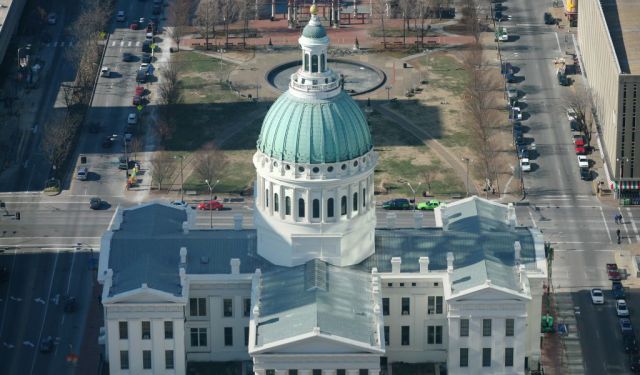 Image by Daniel Schwen on Wikimedia under Creative Commons License.

Situated on the Mississippi River, Saint Louis is today one of the top tourist destinations in United States. The city played a very important role during the American Civil War. It had a strategic location, a major port and was a commercial center with a growing industrial base. Take this walking tour to explore places in Saint Louis that played a role in the greatest and most terrible war that Missouri has ever witnessed.
How it works: Download the app "GPSmyCity: Walks in 1K+ Cities" from iTunes App Store or Google Play to your mobile phone or tablet. The app turns your mobile device into a personal tour guide and its built-in GPS navigation functions guide you from one tour stop to next. The app works offline, so no data plan is needed when traveling abroad.

The Saint Louis Arsenal was built in 1827, when the United States War Department decided to replace a 22-year old arsenal, Fort Belle Fontaine with a larger facility to meet the needs of the rapidly growing military forces. It played a very important part in the American Civil War, being back then a large complex of weapons and ammunition storage buildings owned by the United States Army. Such personalities as William Beaumont, Ulysses S. Grant, William Sherman, Nathaniel Lyon, Daniel Frost, and many others who would claim a place in American military history once served at, or had dealings with, the Saint Louis Arsenal.
Image by Americas Roof on Wikimedia under Creative Commons License.
2

Anheuser-Busch Brewery was built in 1855 and is one of the most famous breweries in the USA. You can, if you so wish, see and learn something about the production process of beer. The brewery also has some old stables and a hospitality room where you can sample the beer. Tour this spectacular building that played an important role in the American Civil War, and visit the historic Budweiser Clydesdale Stable, the Beechwood Lager Cellars, the historic Brew House and the Bevo Packaging Facility.

Why You Should Visit:
You can get a free tour or a paid Beer Master Tour to go behind the scenes where the free tour won't take you (such as the Clydesdales stables, the mashing room, the beer museum, the canning and packaging lines and then finishing up at the finishing tank), so there's something for every budget and interest level in beer. They've got a restaurant, bar, and gift shop on site, so plenty to do if you have to wait for your tour. At the end, you get a gift bag with a beer fresh off the line and coupon for a free beer to drink after in the beer garden.

Tip:
Note that you must have closed shoes to enter the Beer Master Tour!
Note also that it's not the best place to bring little kids because of lots of walking and some stairs. Recommended for older kids only.


Image by pknitty86 on Flickr under Creative Commons License.
3

The Eugene Field House and St. Louis Toy Museum is the place of birth of renowned American writer Eugene Field. On display here are personal objects of the writer himself and his father, Roswell Field. In 1853 Roswell Field was Scott's slaves' family attorney, when they appealed in federal court for their freedom. The refusal of the United States Supreme Court to treat Dred and Harriet as citizens is believed by many to be a factor that precipitated the Civil War. In the Field House & Museum can be seen the original restored furniture, photo exhibits, and a papercraft exhibition. The Museum also contains a vast collection of toys and dolls with the oldest dating back to 1790.

The Old St. Louis County Courthouse was built as a combination federal and state courthouse in St. Louis. Missouri's tallest habitable building from 1864 to 1894, it is now part of the Jefferson National Expansion Memorial and operated by the National Park Service for historical exhibits and events.

Land for the courthouse was donated in 1816 by Judge John Baptiste Charles Lucas and St. Louis founder René Auguste Chouteau. The Federal style courthouse was completed in 1828. It was designed by the firm of Lavielle and Morton, which also designed the early buildings at Jefferson Barracks as well as the Old Cathedral. In 1839 ground was broken on a courthouse designed by Henry Singleton, with four wings, including an east wing that comprised the original courthouse and a three-story cupola dome at the center. In 1851 Robert S. Mitchell began a redesign, in which the original courthouse portion on the east wing was torn down and replaced by a new east wing. In 1861 William Rumbold replaced a cupola with an Italian Renaissance cast iron Dome modeled on St. Peter's Basilica in Vatican City.

Why You Should Visit:
The beautiful paintings, carvings, decorations, and spiral staircases make this building worth your time. Arch tickets are sold here, too.

Tip:
Make sure to climb the stairs to the very top, and to visit the courtroom where the first Dred Scott decision was rendered.

The Campbell House Museum opened on February 6, 1943, and is in the greater St. Louis area. The museum was documented as part of the Historic American Buildings Survey between 1936 and 1941, designated a City of St. Louis Landmark in 1946, listed on the National Register of Historic Places in 1977, and became a National Trust for Historic Preservation Save America's Treasures project in 2000.

The Campbell House Museum commemorates the home and Victorian lifestyle of Robert Campbell and his wife Virginia Kyle Campbell. In preparing an inventory and evaluation of the estate, leading experts in history, architecture and art were called. All were amazed after visiting the house, pronouncing, "probably nowhere in America, possible nowhere else, is such an intact and integral display of elaborate and ornate furnishings of the middle Victorian period to be found, as in the Campbell mansion".

During the 1940s the Campbell House was one of the only museums dedicated to the history and decorative arts of mid-Victorian America. The discovery of the Campbell House photo album allowed for accurate restoration of the interior rooms. In February 2000, the restoration of the house started with the packing and storing of the entire museum collection. The exterior restoration was complete by mid-2001. The interior restoration began in the Spring 2001 and was completed in 2005 restoring the house as closely as possible to its appearance in the 1885 photographs.

Tip:
Don't miss the tour over the holidays when the museum is decorated with antique decorations (be advised, however, that on certain days of the week and in January and February the tours are by appointment only).
The shop is also very unique offering lithograph nightlights and books about the St Louis area.