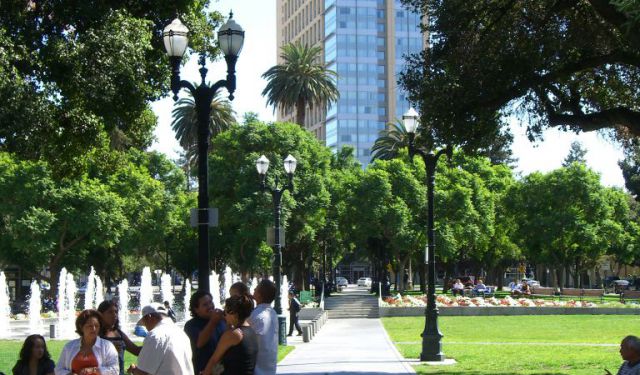 Image by neighborhoods.org on Flickr under Creative Commons License.

Discover the everyday lives of San Jose residents. You will become acquainted with various aspects of city life, including where locals work, study, eat, relax and attend special events. Get a taste of San Jose’s daily life in the following tour.
How it works: Download the app "GPSmyCity: Walks in 1K+ Cities" from iTunes App Store or Google Play to your mobile phone or tablet. The app turns your mobile device into a personal tour guide and its built-in GPS navigation functions guide you from one tour stop to next. The app works offline, so no data plan is needed when traveling abroad.

Scott's Seafood Restaurant specializes in regional American cuisine. Located in downtown San Jose, it is appropriate for casual dining, business meetings or special events. Lunch is available Monday through Friday from 11:15 am to 5:00 pm, and dinner is served Monday through Saturday from 5:00 pm to 9:30 pm and Sunday from 4:30 pm to 9:00 pm.
Image by jeffreyw on Flickr under Creative Commons License.
2

Camera 12 Cinema, opened in 2004, contains 12 screens on three floors. Offering a variety of movies, from major Hollywood productions to foreign films, premiers usually attract crowds. Currently plans are in the works to add Sony 4K digital projection in three theaters and Playstation 3 on the big screen.
Image by Mike Weston on Flickr under Creative Commons License.
3

Missionaries of First Immanuel arrived in the city in 1864. Its first services were held in San Jose's Central Hall. In 1892 the First Immanuel Lutheran church was formally registered in California. Surviving the earthquake of 1906, six other churches have been founded in neighboring cities.
Image by PinkMoose on Flickr under Creative Commons License.
4

Opened in San Francisco in 1857 as Minns' Evening Normal School, in 1862 it became known as the California State Normal School. The school moved to San Jose in 1871, becoming the State Teachers College at San Jose in 1921. San Jose State College was established in 1935 and in 1972 it was granted university status and its name changed to California State University, San Jose. Two years later the California legislature voted to change the name to San Jose State University.
Image by roarofthefour on Flickr under Creative Commons License.
5

The Dr. Martin Luther King, Jr. Library, inaugurated in 2003, has eight floors, over 475,000 square feet and a collection of approximately 1.6 million volumes. It is the main public library and also the library of San Jose State University. It has several special collections, such as the Dr. Martin Luther King, Jr. Civil Rights Collection, the California History Room and more.
Image by the_tahoe_guy on Flickr under Creative Commons License.
6

The Loft Bar and Bistro offers great food, drinks and the hottest DJs. Space is available for special occasions, such as birthday, bachelor or bachelorette parties. It also features a great upstairs patio where guests can enjoy a drink under the stars. It is open Tuesday through Thursday and Sunday from 11:00 am to 11:00 pm, and Friday through Saturday from 11:00 am to 1:30 am.
Image by ginsnob on Flickr under Creative Commons License.
7

During the day, San Jose Bar is a sports bar and in the evening it becomes one of the city’s most popular lounges. Happy Hour is from 4:00 pm to 7:00 pm each weekday. It has televisions in every corner and a projection screen on the back wall. If you want to see a special sporting event, let the staff know and it can be arranged. Local DJs entertain the crowd Thursday through Saturday, offering a variety of music styles. Space for private parties is also available here.

Image by fibroblast on Flickr under Creative Commons License.
8

St. James Park, a beautiful area in downtown San Jose where locals go for walks, is notorious as the scene where two men were lynched for the kidnapping and murder of Brooke Hart, son of the owner of L. Hart and Son Department Store. A statue of William McKinley, the 25th President of the United States, is also located in this park. McKinley is known for the Spanish-American War, which happened during his presidency, when the United States annexed Puerto Rico, Guam and the Philippines.
Image by HarshLight on Flickr under Creative Commons License.