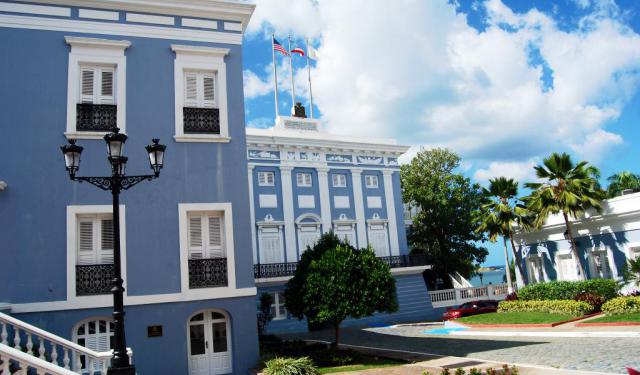 Image by Mtmelendez on Wikimedia under Creative Commons License.

San Juan proudly features the country’s oldest quarters and historic buildings. In addition to containing the oldest occupied residence in the Western Hemisphere, visitors can also admire the old City Hall, the Cristo Chapel, Convento de los Dominicos, historic El Arsenal and many other fascinating attractions. Take the following tour to see the most popular and famous historic buildings in San Juan!
How it works: Download the app "GPSmyCity: Walks in 1K+ Cities" from iTunes App Store or Google Play to your mobile phone or tablet. The app turns your mobile device into a personal tour guide and its built-in GPS navigation functions guide you from one tour stop to next. The app works offline, so no data plan is needed when traveling abroad.

Located on La Puntilla Street, El Arsenal was built in 1791 as a Spanish naval station. Later the building became a citadel, which contained a storage room, offices, living sectors, workshops, a coast guard, kitchens and its own chapel. It features a combination of architectural styles and is now home to three exposition galleries.
Image by Troy and Gayle under Creative Commons License.
2

Capilla Del Santo Cristo de la Salud is small chapel dating back to 1753. Over the centuries this beautiful chapel was a lovely place of worship to thousands of people. As a legend tells, this historical structure was built to commemorate a miracle.
Image by Mtmelendez on Wikimedia under Creative Commons License.
3

Alcaldía, or San Juan City Hall, located at Plaza de Armas, is a prominent local landmark and historical building. It was built at the end of the 18th century and is an exact replica of the one in Madrid. The building now houses a tourism information center and a small art gallery, which displays periodic exhibitions.
Image by Bill Holmes on Flickr under Creative Commons License.
4

The Cathedral of San Juan Bautista is the Roman Catholic cathedral of the Archdiocese of San Juan de Puerto Rico. The cathedral is one of the oldest buildings in San Juan, located in Old San Juan, and is the second oldest cathedral in the Americas. The Cathedral of Santa María la Menor in Santo Domingo in the Dominican Republic, is the oldest. The original cathedral in what was the city of Puerto Rico (changed to San Juan after the Spanish-American War) was constructed from wood in 1521. It was destroyed by a hurricane and the current structure constructed in 1540, being reshaped in later centuries, the last time being in 1917.

The first school in Puerto Rico (and the oldest school in the United States after Puerto Rico became a territory of the United States) was the Escuela de gramática (Grammar School). The school was established by Bishop Alonso Manso in 1513, in the area where the cathedral would later be constructed. The school was free of charge and the courses taught were Latin language, literature, history, science, art, philosophy and theology.

The cathedral contains the tomb of the Spanish explorer and settlement founder Juan Ponce de León. It also has a shrine to the Blessed Carlos Manuel Rodríguez Santiago, the first Puerto Rican, the first Caribbean-born layperson and the first layperson in the history of the United States to be beatified.

Cuartel de Ballajá is also known as Ballajá Barracks or Ballajá Quarters. The construction of this historical building began in 1854 and was completed in 1863. This three-story building features huge gates, several balconies and a number of fine arches. It could accommodate over 1,000 citizens, originally Spanish soldiers and their families. Its vast interior patio is one of the best examples of 19th-century Spanish architecture. Today, the Ballajá Barracks houses several educational and cultural organizations, namely the Museo de Las Américas, on the second floor of the building since 1992. On the first floor, there are music and dance schools, a library, among other things.

The Museo de Las Américas has three permanent collections: African Heritage, the Indian in America, and Popular Arts in America.

Image by Thief12 (Carlo Giovannetti) on Wikimedia under Creative Commons License.
Sight description based on wikipedia
6

Casa Blanca is a house museum located in Old San Juan within the historic colonial section of the capital of Puerto Rico. Built in 1521 it served as the first fortification of the San Juan islet and residence for Juan Ponce de Leon and his family, although de Leon died in an expedition to Florida without ever getting to occupy the structure. It was used as the residence of his descendants, until the mid-18th century. As a fortification it served mostly as a refuge in times of attack from Taino rebels.

The house was built in wood but was destroyed by fire and rebuilt in stone and masonry. It subsequently was occupied by members of the Spanish army and later by American army commanders. The surrounding gardens were planted by the first American governor of the island in the 19th century. In 1967 the complex was transferred to the government of Puerto Rico and declared a historical monument. In 1981, it was recorded in the Historic American Buildings Survey. The house is a museum of 16th and 17th century artifacts managed by the Institute of Puerto Rican Culture.

Casa Rosa or Casa Rosada, also known as the Pink House, is a historic house located in Old San Juan. The house was built in 1812 as a barrack for the troops assigned to the San Agustin Bastion. It was converted to an officers quarters in 1881 by the Spanish Army. The building was later converted to a museum for Puerto Rican crafts. Today it operates as a day care center for the children of employees of the Government of Puerto Rico.

Puerta de San Juan is a famous city gate built in the late 1700s. This 40 feet high red gate, built to protect the city from invaders, is one of six impressive wooden doors which were closed at sundown for centuries. If you turn right after passing through the gate, you will find the way to Fort del Morro.
Image by Ricardo Espada on Wikimedia under Creative Commons License.

Old San Juan is packed with historical places, among which are the city’s old squares. Many of them house beautiful fountains, prominent monuments and wonderful sculptures which depict the rich history of this amazing city. Check out San Juan’s most popular historical squares in the next self-guided tour!