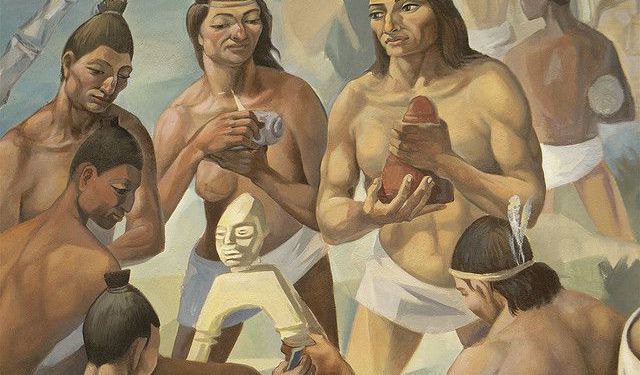 Image by colros on Flickr under Creative Commons License.

Santo Domingo is very beautiful and popular among tourists. The city offers a large variety of distinct cultural spots, thus making Santo Domingo all the more attractive. Museums, theaters, and other beautiful buildings line the city streets, clearly demonstrating culture through its traditions and its art.
How it works: Download the app "GPSmyCity: Walks in 1K+ Cities" from iTunes App Store or Google Play to your mobile phone or tablet. The app turns your mobile device into a personal tour guide and its built-in GPS navigation functions guide you from one tour stop to next. The app works offline, so no data plan is needed when traveling abroad.

1) Museum of Dominican Man (must see)

The Museum of Dominican Man features a lot of information and worthy facts prior to the arrival of the Spanish. Here, visitors may learn about the slave trade as well as the other events during this time period. Several exhibits showcase pre-Columbian artifacts, while other displays focus on costumes and other historical pieces.

Image by Francisco A. Rosario on Flickr under Creative Commons License.
2

2) National Museum of History and Geography (must see)

The National Museum of History and Geography is famous for its unheralded amount of information which speculates on the life, history, and geography of the Dominican Republic. The large museum is divided into five different sections, each with a particular niche or area of focus.
Image by j.clark on Flickr under Creative Commons License.
3

3) Museum of Modern Art (must see)

The Museum of Modern Art was created in 1976. Originally regarded as The Gallery of Modern Art, this modern museum features paintings and various other art from various local designers. Tourists must also take a detour outside where they will find a beautiful garden.

The building has four levels that, in addition to the two main halls, house the administrative offices, a reception hall, the Sala de la Cultura (Culture Hall) and a bar. The Sala de la Cultura, with a capacity of 220 spectators, was created for piano concerts, chamber concerts, symposia, seminars, and cultural events of similar scale.

Image by Gabriel Antonio Paulino on Flickr under Creative Commons License.
Sight description based on wikipedia
5

5) Museum of Natural History (must see)

The Museum of Natural History was constructed in 1982. The Natural History museum offers an angle into the distinct flora and fauna life of the Dominican Republic. The museum is separated into three different sections, each with a unique theme. Visitors will learn about the solar system, formation of the Antilles, as well as the many ecosystems of marine life.

If you want to find out more about Dominican Republic history, than you should visit the National Library. The library's catalog is incredibly vast, full with old articles and documents which describe the history of Santo Domingo.
Image by ben.gallagher on Flickr under Creative Commons License.
7