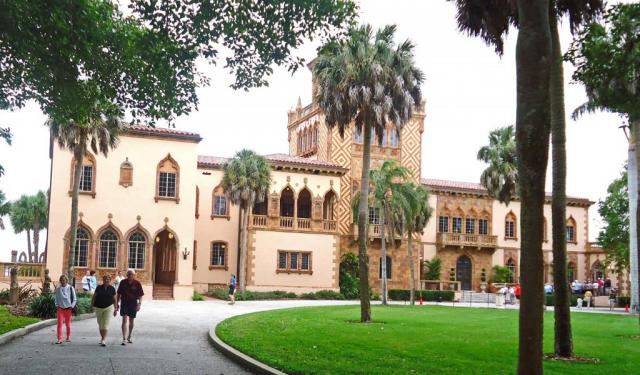 Known for the abundance of cultural institutes, Sarasota – a quaint coastal getaway – has long been regarded as one of the premier destinations for those seeking to satisfy their “culture buds”. The Van Wezel Performing Arts Hall, Sarasota Opera House, Marie Selby Botanical Gardens are just some of the city's top attractions. To visit these and other notable sites of Sarasota, follow this orientation walk.
Image Courtesy of Flickr and Roger W.
How it works: Download the app "GPSmyCity: Walks in 1K+ Cities" from iTunes App Store or Google Play to your mobile phone or tablet. The app turns your mobile device into a personal tour guide and its built-in GPS navigation functions guide you from one tour stop to next. The app works offline, so no data plan is needed when traveling abroad.

Sarasota Orchestra, formerly known as the Florida West Coast Symphony, is an American symphony orchestra located in Sarasota, Florida, which performs symphonic and chamber works for the Manatee, Sarasota, and Charlotte counties. The 80-member orchestra performs more than 100 classical, pops and family concerts each year, and is the "oldest continuing orchestra" in the state of Florida. The orchestra also hosts a music education program including the 50-year-old Youth Orchestra, which features five ensembles, the most advanced of which, The Youth Philharmonic, made its Carnegie Hall debut in 2008. In the fall of 1948, Ruth Cotton Butler, a Sarasota music teacher, enlisted the support of businessmen Dr. W.D. Sugg and J. Lorton Francis of Bradenton, and George Gibbs, an amateur musician from Venice. Their combined effort produced the debut concert of the Florida West Coast Symphony on March 12, 1949. In 1961, Paul Wolfe began a 35-year tenure as artistic director and conductor. His leadership allowed the Orchestra to establish a core chamber and four resident chamber ensembles, expand the Youth Orchestra Program and consolidate the then Florida West Coast Symphony and the Music Festival of Florida, to create the Sarasota Music Festival.
Image Courtesy of Flickr and Roger W.
Sight description based on Wikipedia.
3

The auditorium has been used for many community functions and recreational activities. It has also been known as the Sarasota Exhibition Hall and the Sarasota Civic Center Exhibition Hall. The auditorium is located on a large parcel of public land that is reserved for civic, government uses. On February 24, 1995, the complex was added to the U.S. National Register of Historic Places.
Image Courtesy of Flickr and Clyde Robinson.
Sight description based on Wikipedia.
4

The Gulfcoast Wonder & Imagination Zone was opened in 1990. Its main aim is to make technology understandable and science relevant. This innovative science center features exhibits that cover a wide range of subjects designed to entertain you and your child. The large number of exhibits have themes ranging from music and mathematics to physics and chemistry.
Image Courtesy of Flickr and Theme Park Mom.
5

The design of the Times Building is one of Mr. Baum's most successful; the variety of architectural elements, including the use of three different door types and enframements on the ground floor elevation of the Times Building is particularly effective on a relatively small-scaled building. Following the crash of the land prices and the onset of the Depression, the Sarasota Times newspaper went into receivership. The Times Building was subsequently used as the office of the "Tree-Ripe Citrus Products, Inc. which was owned and operated by Mr. Owen Burns.
Image Courtesy of Flickr and Look Up, America!.
Sight description based on Wikipedia.
6

Unconditional Surrender is a series of sculptures by Seward Johnson resembling a photograph by Alfred Eisenstaedt, V–J day in Times Square, but said by Johnson to be based on a similar, less well known, photograph by Victor Jorgensen.
Seward Johnson first built a life-size bronze precursor to the huge statues of Unconditional Surrender using computer technology. A 25-foot (7.6 m)-tall styrofoam version of the work was part of a temporary exhibition in Sarasota, Florida in 2005, at its bay front. Johnson established the Sculpture Foundation to disseminate his work
Image Courtesy of Flickr and Catalán.
Sight description based on Wikipedia.
7

The Gompertz is located on First Street and was built in 1920. Initially the building housed the Park-Seventh Movie House. During the Depression the building was closed. Over the years, it housed a number of different businesses like The Playhouse and Asolo Theater. At present, the Florida Studio Theater uses the building for its shows.
Image Courtesy of Flickr and srqpix.
8

Opening Hours:
Mon-Fri: 10am-5pm, during shows and events
Image Courtesy of Flickr and srqpix.
Sight description based on Wikipedia.
9

Opened in 1971, the Golden Apple Dinner Theatre is a nice mix of great dining experience and mesmerizing theatre performance. Having 281 seats and a horseshoe shape, this place has produced over 300 musicals and plays. Having received many awards for excellence, it's a sure bet you'll enjoy your time here at Golden Apple Dinner Theatre.
Image Courtesy of Flickr and Performing Arts / Artes Escénicas.
10

Main Street in downtown Sarasota is home of dozens of shops, restaurants and nightclubs. There are many special events throughout the year, including live music, art festivals, motorcycle shows and parades.
Image Courtesy of Flickr and Roger W.
11

Located on South Orange Avenue, the U.S. Post Office was built in 1934. The building was designed by Louis A. Simon and George Albee Freeman and is in the Classical Revival style with two floors. It was the last building to be designed by Freeman. The building was added to the National Register in 1984.
Image Courtesy of Wikimedia and Ebyabe.
12

Bayfront Park is an area of Sarasota, Florida along Sarasota Bay that includes a marina and the Chidsey Library building. A fountain is located at the center of the park
Image Courtesy of Flickr and Mark Goebel.
Sight description based on Wikipedia.