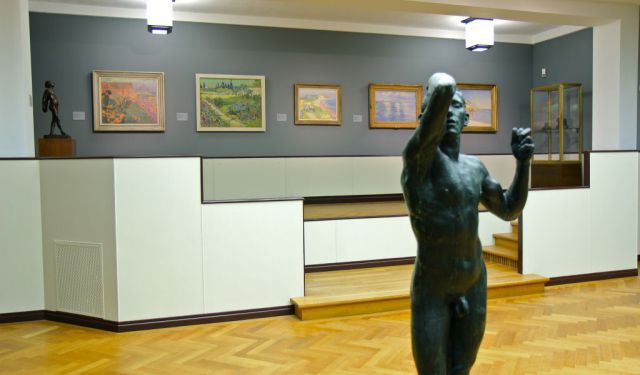 Image by Marianne Bevis on Flickr under Creative Commons License.

Self-Guided Museums and Art Galleries Tour of The Hague (Self Guided), Hague

The Hague remains a significant and exciting city with many museums and art galleries. Some of these institutions are internationally known, while others are less famous. Art museums, such as De Verdieping van Nederland and the Museum Het Paleis, add to the culture of the city, as do the Historical Museum, the Mauritshuis, and many others. Here is a list of museums and art galleries you should visit in The Hague.
How it works: Download the app "GPSmyCity: Walks in 1K+ Cities" from iTunes App Store or Google Play to your mobile phone or tablet. The app turns your mobile device into a personal tour guide and its built-in GPS navigation functions guide you from one tour stop to next. The app works offline, so no data plan is needed when traveling abroad.

This museum was founded in 1996. It is located in the former Gallery of Albert Bird (1924-1982), named after a famous biographer and performer. The museum is within a walking distance of many places where Louis Couperus lived. It is near Mauritskade, where he was born in 1863 and where he enjoyed the view of the Alexanderplatz, the former parade ground of the Alexander Barracks. It is also close to Suriname Street, where Couperus's father built a large house in 1884 and where the author wrote his first novel Eline Vere.

Image by Richard Broekhuijzen on Wikimedia under Creative Commons License.
2

Stroom was founded in 1989. It focuses on visual art, architecture, and urban design, and holds various events, exhibitions and lectures throughout the year. Stroom is located in a former shop that was built in the 19th century. It was substantially renovated in 2004 and modified by the architect Wim Cuyvers. The works of art found in Stroom are focused primarily on visual arts in relation to the urban environment.

Image by cea + on Flickr under Creative Commons License.
3

The art gallery De Twee Pauwen was opened in 1989. Initially, expositions were arranged on Anna Paulownastraat, but since 2000, the gallery has been sheltered in the heart of The Hague. De Twee Pauwen Art Gallery displays high-quality modern art with an emphasis on artists, who use their technical talents to express their imaginative inner world. The gallery shows the work of illustrious Dutch painters and sculptors, as well as famous artists from other countries.

Image by Vincent Steenberg on Wikimedia under Creative Commons License.
4

The Lange Voorhout Palace was founded in the 18th century. It is situated in the most attractive part of The Hague. For many years queens had lived at the palace, but the building is now a museum devoted to the work of a Dutch graphic artist. Printed material, drafts and annals are exhibited by the museum. You will be surprised by Escher Hall, which plays games with natural human size, and captivated by the delightful works of this illustrious artist.

Haags Historisch Museum, is located in the historic center of The Hague in the former house of St. Sebastian that dates back to 1636. Since the late 18th century, the house has been used as a hotel, court house and a museum. The Haags Historisch Museum has occupied the building since 1986. There have been numerous renovations, as the building was not originally designed to accommodate a museum.

The Royal Picture Gallery Mauritshuis is an art museum. Previously the residence of count John Maurice of Nassau, it now has a large art collection, including works by Dutch and German painters. In 1822, the Mauritshuis was opened for the public and housed the Royal Cabinet of Paintings and the Royal Cabinet of Rarities. In 1875, the entire museum was available for paintings. The Mauritshuis was a state museum until it was privatised in 1995. The foundation set up at that time took charge of both the building and the collection, which it was given on long-term loan. This building, which is the property of the state, is rented by the museum.

The museum collaborates regularly with museums in other countries. The collection of paintings of stadtholder William V, Prince of Orange was handed over to the Dutch state by his son king William I. This collection formed the basis of the Royal Cabinet of Paintings of around 200 paintings. The collection is currently called the Royal Picture Gallery. The current collection consists of almost 800 paintings and focusses on Dutch and Flemish.