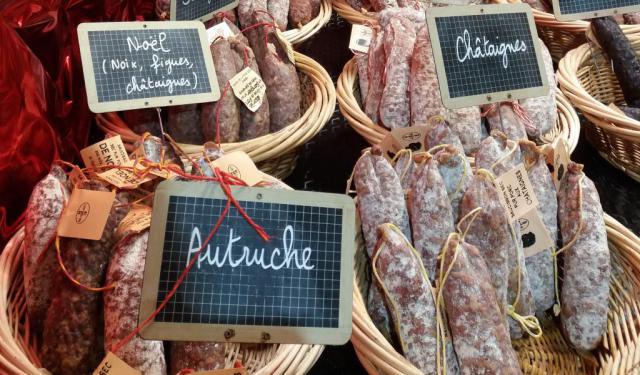 Image by hern42 on Flickr under Creative Commons License.

Lyon is very beautiful city, the second-largest in France after Paris. It has many interesting, historic places to visit. Lyon has a number of museums set to educate the public on the history of France and Lyon. Many of the museums preserve and display works by French artists, as they represent the rich cultural heritage of the country. Take this tour to discover the beauty and historic importance of Lyon.
How it works: Download the app "GPSmyCity: Walks in 1K+ Cities" from iTunes App Store or Google Play to your mobile phone or tablet. The app turns your mobile device into a personal tour guide and its built-in GPS navigation functions guide you from one tour stop to next. The app works offline, so no data plan is needed when traveling abroad.

The abbey was built in the 7th century and renovated in the 17th. The nuns were expelled during the French Revolution. The palace was once again renovated and expanded between 1988 and 1998.

The museum was founded in 1801 and covers the period from Ancient Egypt to the Modern Art era. The collection represents most disciplines and is one of the most important museums of fine arts in France.

The temporary and permanent exhibitions are housed in 70 rooms, 35 of which are taken up by paintings from the 14th to mid 20th centuries. These are arranged in a chronological order according to major schools of art. French, German, Flemish, Dutch and Spanish works are on display.

In the museum’s garden you will find 19th century statues; the rest are set out in two sections: Medieval and Renaissance works on the ground floor and 19th and 20th century statues in the former refectory.

Nine rooms are dedicated to Ancient Egypt, 600 items are arranged by theme in a chronological order. Other rooms display items from Assyria, Babylon, Cyprus, Samaria and Syria. Three rooms have been set aside for Greek artifacts and Roman sculpture.


Image by Vassil on Wikimedia under Creative Commons License.
Sight description based on wikipedia
2

The Musée de l’Imprimerie is a fascinating place to visit for both adults and children, and should be high on your “must visit” list.

You will find the museum on rue de la Poulaillerie, housed in the Hôtel de la Couronne. This hôtel particulier was built in the 15th century for a rich master merchant. From 1604 to 1655 it was used by the Aldermen of the city before being sold to a trader. Its last owners, the banking group LCL, donated the building to the city of Lyon in 1957 and a banking museum was installed there.

The Museum de l’Imprimerie opened in 1963 with the aim to conserve, document, develop and value the printing heritage of books and graphics for the public.

You will see various works by noted Renaissance printers, such as Sébastien Gryphe, a 16th century bookseller and printer, and Bernard Salomon, a 16th century French printer, engraver and draughtsman. The museum has a wonderful display of 17th to 20th century presses, all in working order, with workshops organized so that visitors can try their hand at “setting” a press.

There is a collection of examples of books over the ages, including an incunabula, printed before Easter 1500, and 16th to 19th century woodcuts and engravings.

Operation hours: Wednesday - Sunday: 10:30 am – 6 pm.
Image by Morburre on Wikimedia under Creative Commons License.
Sight description based on wikipedia
3

As the famous 19th-century puppet Guignol was created in Lyon, it is only natural that there should be a museum dedicated to him and his fellow-creatures.

There actually are two twin museums housed in the same Gadagne Building: the Museum of Lyon History opened in 1921 and is an interesting, educational museum, dealing with the period from de Gaul’s to the present day.

You will learn all about the city of Lyon through the 80,000 items that take you through the daily lives of the people: their economic and social lives, religion and the planning and growth of Lyon over the ages. The items include objets d’art, silver and gold plated artefacts, furniture, drawings, paintings and plans of the city, set out in 31 permanent exhibition rooms.

The Puppet Museum opened in 1950 and started out with a small collection based on the Guignol puppet. Closed between 2003 and 2009 for major renovations and up-dating, the museum now boasts of over 2000 puppets from all over the world.

The puppets now have nine rooms for themselves, each equipped with multimedia for watching short plays and pedagogic slide shows that explain all about the techniques of puppeteering and its links with other forms of art. Contemporary puppeteers give interesting lectures at certain times during the day, and there is an audio guide in various languages.

On top of the building, there is a small theatre that seats 138 spectators. Puppet plays are put on at regular intervals to the delight of both adults and children.

4) Museum of Gallo-Roman Civilization (must see)

The Museum of Gallo-Roman Civilization is perhaps the most interesting museum in Lyon and the only one to have been especially built for the purpose of housing ancient artifacts recovered from various archaeological digs in the region.

These precious artifacts were once housed in the Palais de Saint Pierre, but in 1957 they were moved to a small building and all but forgotten. The museum was built by Zehrfuss and opened to the public in 1975. Since 1991 it has been managed by the Rhône District Council.

The museum stands appropriately enough on the site of a Roman theater and is divided into three sections: permanent exhibitions, research and workshops.

Half of the floor space is divided into 17 rooms with thematic displays, each room organized around a central object that the other items are linked to. These displays include inscriptions, mosaics, ceramics, glass, jewelry and sarcophagi from 43BC to the early Christian era.

The collections are mainly from the Rhône, Ain and Isere departments. They spell out a fascinating story of life in Lyon, the capital of Gaul, and the outlying areas.

The other half of the museum is taken up by offices, workshops and an excellent research and reference library, which is open to the public.

Operation hours: Tuesday - Friday: 11 am- 6 pm; Saturday-Sunday: 10 am- 6 pm.
Image by Alorange on Wikimedia under Creative Commons License.
Sight description based on wikipedia
5

The Decorative Arts and Textile Museum is housed in the beautiful Hôtel de Villeroy, which once was the home of the Governor of Lyon.

The Textile Museum was founded in 1864 and comprises one of the richest collections in the world. It traces 4000 years of textile history and has over 2 million examples from the 15th century BC to the present.

The museum is divided into two sections: the Occident and the Orient. The occident is represented by costumes, embroideries and religious cloth from France, Italy and Spain. In the section representing the orient, you will see Coptic Egyptian tapestries, Sassanid Persian cloth, Chinese and Japanese silks and a collection of Islamic rugs that highlight the evolution of rug-making.

The Decorative Arts Museum, which opened in 1925, compliments the textile museum. Set out in the manner of an 18th century private home, the walls are decorated with 15th and 16th century tapestries and on the floors are Byzantine rugs.

The furniture was made by noted 16th and 17th century cabinet-makers, and there are wonderful examples of silversmith’s art, earthenware items, paintings and a superb collection of clocks. In a more contemporary note, you will also see silverware from the nineteen sixties to the present day.

Hours: Tuesday to Sunday 10 am - 6 pm.
Image by Aurelie Chaumat on Wikimedia under Creative Commons License.
6

No-one can come away from the Centre d’Histoire et de la Déportation without understanding the horror of the events that took place during the Second World War.

The museum opened in 1992 on the site of a former military health college. This is a particularly symbolic place because the college was used by the Nazis during the war and Klaus Barbie himself took part in the questioning and torture of many Resistants, real or suspected. The famous Resistant Jean Moulin was held and tortured there. The building was destroyed by American bombing in 1944.

The museum is part of the Berthelot Centre. The original cellars that were used as cells are intact and are an important part of the museum; temporary exhibitions are held here. These exhibitions teach us about the values of the Resistance, the lives of people dedicated to peace and Human Rights in the modern world.

The museum has three concepts: Information and Propaganda, Time and Space and Commitment. You will listen to music of the epoch, watch short documentary films and extracts from over 700 filmed personal stories by Resistants and deportees. There are documents and photos that tell their own harrowing story.

People who survived the camps, the “hidden children” and Resistants give interesting eye-witness accounts of the fear and the secrets they lived with.

Operation hours: Wednesday - Sunday 10 am – 6 pm.
Image by tsuacctnt on Flickr under Creative Commons License.
Sight description based on wikipedia