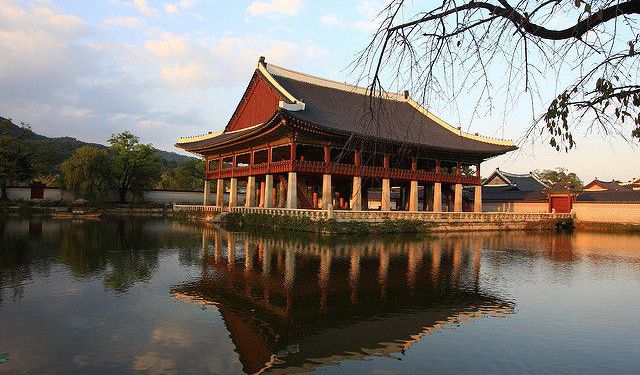 Image by Bridget Coila on Flickr under Creative Commons License.

The capital of South Korea, Seoul is a bustling metropolis replete with modern skyscrapers, high-tech infrastructure and pop culture mixed up with Buddhist temples, ancient palaces and street markets. Among the local attractions not to be missed are the high-rising Jongno Tower with a rooftop restaurant and bar offering visitors a remarkable view of the city; Namsangol Hanok Village - a time capsule of the Joseon Dynasty period, and Jogyesa Temple, the site of ancient locust and pine trees. These and other attractions make up this orientation walk of Seoul.
How it works: Download the app "GPSmyCity: Walks in 1K+ Cities" from iTunes App Store or Google Play to your mobile phone or tablet. The app turns your mobile device into a personal tour guide and its built-in GPS navigation functions guide you from one tour stop to next. The app works offline, so no data plan is needed when traveling abroad.

Officially known as the Sungnyemun ("Gate of Exalted Ceremonies"), this is one of the Eight Gates in the Fortress Wall of Seoul, which surrounded the city in the Joseon dynasty.

Dating back to the 14th century, Namdaemun is a historic pagoda-style gateway and is designated as the first National Treasure of South Korea. It was once one of the three major gateways through Seoul's city walls which had a stone circuit of 18.2 km (11.3 mi) and stood up to 6.1 m (20 ft) high. It was first built in the last year of King Taejo of Joseon's reign in 1398 and rebuilt in 1447.

Tip:
Throw in a visit while on your way to Namdaemun Market, but make sure that you're there after 9am because they don't open before that.


Image by LWYang on Flickr under Creative Commons License.
Sight description based on wikipedia
2

Namdaemun Market is called after Namdaemun Gate. The gate is Korea's most important national treasure. Locals and Tourists prefer this place as they can find here everything from clothes to food for a very reasonable price. Numerous small shops are set along pedestrian streets of Namdaemun. You can find here everything you want.
Image by yarra64 on Wikimedia under Creative Commons License.
3

Myong-dong is a first class shopping and entertainment street. Locals prefer to shop here. People of different ages can find something special in fashion designers boutiques, shoe stores that are in abundance in this place.
Image by Kirakirameister on Wikimedia under Creative Commons License.
4

Namsangol Hanok Village is a time capsule of the Joseon Dynasty period. It consists of traditional Korean houses that are surrounded by skyscrapers – that is why this small historical village appears as something very unusual. Unlike Bukchon Hanok Village where you can only admire the houses from the outside, here you can actually get inside and walk around them. The architecture is lovely and many of the houses have rooms decorated in traditional style, allowing you a peek into Korea's past. You will see many people coming in traditional attire and posing for photos. It's a very lovely area with a pavilion, a pond, a time capsule, and a nice park just next door that makes for a nice stroll. If you're lucky, there are traditional dance shows organized for visitors. There is also a gift shop which has some nice and affordable souvenirs.

Opening Hours:
Tue-Sun: 9am-9pm (Apr-Oct); 9am-8pm (Nov-Mar)
No entry fee and you can ask for a guided tour free of charge as well.

Image by by Koshyk on Wikimedia under Creative Commons License.
5

Also known as the Cathedral Church of Virgin Mary of the Immaculate Conception, the Myeongdong Cathedral clearly represents South Korea's Catholicism. Styled in Gothic Revival architecture, its red and gray brick facade is actually atypical of its kind but more like a fusion with Korean-style finish. The structure itself is quite outstanding (but not imposing), being built on a much higher ground than the rest of its adjoining structures. The grounds are well maintained and kept spotlessly "immaculate" despite the throngs of tourists that flock the area. The interior is equally magnificent with its high vaulted ceilings, pointed arches, and stained glass windows.

The street where Myeongdong is located comes alive especially during weekends so one can visit the shops and try the various street food that plies the alleyways.

Tip:
It might look like it's closed, but the doors either side of the main door are quite possibly open.
Read a bit of the history (free guides in many languages) as it makes it more relevant.

Bosin-gak Bell tells about the history. It is set in the center of Seoul. It rang each hour in old times and as an alarm of fire, now it rings only at midnight on the New Year night and gathers a lot of people around it. It was first built in 1396, but destroyed by war and fire and rebuilt.
Image by Steve46814 on Wikimedia under Creative Commons License.
7

Jongno Tower is a modern skyscraper with 33 floors. There is a restaurant and a bar at the top offering wonderful and impressive views of the city. The tower is set near Jonggak Metro Station and famous and ancient Bosin-gak bell. A big book shop is housed in this building.
Image by michellzappa on Wikimedia under Creative Commons License.
8

Located in one of the most popular cultural streets in Seoul, Insa-dong, and very close to the palace of Gyeongbokgung, Jogyesa is the chief temple of the Jogye Order of Korean Buddhism, becoming so in 1936. It thus plays a leading role in the current state of Seon Buddhism in South Korea. The temple was first established in 1395, at the dawn of the Joseon Dynasty; the modern temple was founded in 1910 and initially called "Gakhwangsa". Natural monument No. 9, an ancient white pine tree, is located within the temple grounds.

Why You Should Visit:
What the complex lacks in size, it makes up for with the impressive and opulent interior of the temple.
You can come by to hear the monks chanting prayers – it's really quite moving, even for non-Buddhists.

Tip:
Visit at night to see the gardens lit up and lanterns on display – a magical wonderland!
When services are going on, do not enter the main temple without removing your shoes and avoid snapping photos during this time out of respect.

Insadong is a narrow pedestrian shopping street with antique shops and secondhand bookstores along it. At one time it was the largest market for antiques and artworks in Korea. One can buy authentic things of Choson Dynasty chests, calligraphy, old paintings, and other things that will remind Korea's past. There are also many art galleries and traditional teahouses scattered throughout, plus some interesting restaurants and cozy alcohol joints in the back streets. Cool area to explore and mostly everyone speaks at least functional English.

Tip:
Do try the mango ice-creams from street vendors. It's not really ice cream but sweet fresh mangoes that were frozen... refreshing indeed.
Try the tea form the teahouses and also don't be afraid to approach the kids with hanboks for a picture – they love the attention.
Image by johl on Wikimedia under Creative Commons License.

Seoul is an old city with rich history. There are many museums about Asian traditions, food, technological development, wars. Some of the museums are located in beautiful palaces, that are national historical monuments and national heritage protected by UNESCO. This self-guided tour will lead you to the most important museums of Seoul:

The capital of South Korea, Seoul is a bustling metropolis replete with modern skyscrapers, high-tech infrastructure and pop culture mixed up with Buddhist temples, ancient palaces and street markets. Some of these attractions, such as the Deoksu Palace, a piece of 15th century Chosun Dynasty royal architecture (nowadays housing the Royal Museum); Gyeonghuigung Palace, and Changdeokgung Palace,...  view more