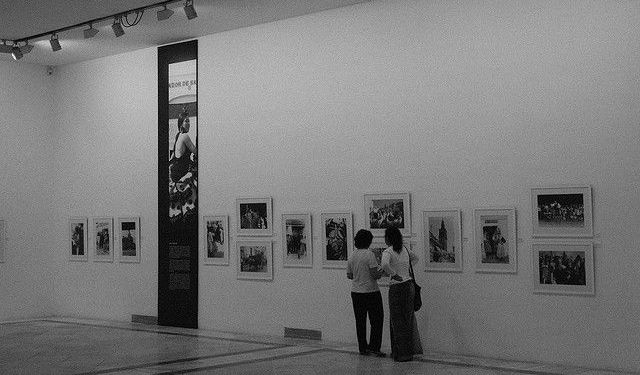 Image by Jacobo Canady on Flickr under Creative Commons License.

A city situated at the intersection between Arabic and European cultures, Seville has a rich cultural heritage. A visit to this city wouldn't be complete without seeing such iconic sites as its museum and art galleries. Discover the artistic and historical Seville in the Museum of Fine Arts, the Archive of the Indies and other institutions, all selected and described in this self-guided tour.
How it works: Download the app "GPSmyCity: Walks in 1K+ Cities" from iTunes App Store or Google Play to your mobile phone or tablet. The app turns your mobile device into a personal tour guide and its built-in GPS navigation functions guide you from one tour stop to next. The app works offline, so no data plan is needed when traveling abroad.

The Archive of the Indies is a World Heritage Site located close to the Seville Cathedral. Besides being a unique piece of architecture, it serves as a repository that includes as many as 43,000 historical documents, such as maps and books about the Conquistadors and the discovery of the Americas. The building is designed by the famous Juan de Herrera in the Renaissance style.

Why You Should Visit:
Not only is this an amazing building and a work of remarkable architecture, but also a place that calls for reflection.
On the walls, you can see plaques and reminders of everything that the Spanish Crown extracted from Latin America.
The story of the so-called New World is presented as an open book on the walls of this archive. Very interesting.

Tip:
One of the most interesting exhibits is on the ground floor – the 1616 cannon from the "Nuestra Señora de Atocha" which was a treasure-laden ship that sank in a storm on the way back to Spain from Havana. This one exhibit is enough to make the visit memorable – don't miss it!


Image by Florian Batalla on Flickr under Creative Commons License.
2

Seville's Naval Museum is located in the historic Torre Del Oro (Golden Tower). The building was originally a military watchtower, initially covered with gold. Today, it is used as a museum to display a great collection of documents such as maps, engravings and antiques concerning Spanish maritime history and culture.
Image by clspeace on Flickr under Creative Commons License.
3

La Caja China Gallery is located on General Castaños street in Seville. It is a popular gallery that houses mostly Surrealist collections. It usually exhibits works by young artists and the exhibitions last for 25 days.
Hours: Monday to Friday from 18.00 to 21.00; Saturdays from 11.30 to 13.30
Image by Roy Brooks under Creative Commons License.
4

Seville's Museo Taurino is located within the bullfighting arena Plaza de Toros de La Maestranza. It is the right place for those interested in the ancient Spanish tradition of bullfighting. The museum displays a good collection of documents, paintings, photos and historical relics about Seville's Plaza de Toros. There is also a museum shop on the premises.
Image by PictFactory on Flickr under Creative Commons License.
5

Located in a 16th-century building, Sevilla's Museo de Bellas Artes is considered one of Spain's best fine arts museums. It showcases a collection of mainly Spanish visual arts from the medieval period to the early 20th century, including a choice selection of works by artists from the so-called Golden Age of Sevillian painting during the 17th century, such as Bartolomé Esteban Murillo, Francisco de Zurbarán, Francisco de Herrera the younger, and Juan de Valdés Leal. The museum was founded in 1839, after the shuttering of religious monasteries and convents, collecting works from across the city and region.

Why You Should Visit:
No great masterpieces but lots of interesting/enjoyable things to look at. Just as impressive as the works on display are the courtyards, staircases, tiles, and the ceilings.
Audio guides available, but there are also a few descriptions in English, so you can really focus on the exhibits instead of trying to learn about them.

Tip:
If you are an EU citizen and have some ID you will get in here for free. Non-EU citizens are charged a very modest €1.5 fee.
There is a free locker for bags and a leaflet at the entrance that explains the background to the collection.

The Andalusian Center of Contemporary Arts is a huge cultural facility to be found on Cartuja island. It contains open air exhibitions, the Cartuja Monumental Center and the Contemporary Art Museum of Seville. The Center is famous for its artistic activities, seminars, projects and temporary exhibitions.
Hours: Tuesday-Saturday: 11:00 am – 9:00 pm; Sunday: 10:00 am – 3:30 pm.
Image by Matthew Black on Flickr under Creative Commons License.
7

The Monastery of Santa María de las Cuevas is a religious building on the Isla de La Cartuja in Seville. Legend holds that the area, in Moorish times, was honeycombed with caves made by potters for ovens and to obtain clay, and that after the capture of the city by Christians in the thirteenth century, an image of the virgin was revealed inside one of the caves, where supposedly it had been hidden. It prompted the construction of a chapel of Santa María de las Cuevas to house the venerated icon. In the 15th century, the archbishop of Seville, aided by the noble family of Medina, helped found a Franciscan monastery at the site.

In 1964, it was declared a national monument, and now is owned by the government of Andalusia. Restorations were made for the Seville Expo '92. In 1997, it became the site of a museum of contemporary and ceramic art.
Image by Stark on Wikimedia under Creative Commons License.
Sight description based on wikipedia

Seville is a city full of sun and romance. The home of Flamenco and bullfighters, and of Andalusian culture in general, Seville has an authentic Spanish flavor. The next self-guided tour takes you through some of the most popular attractions of the city. Enjoy!

It would be a pity to leave Seville without having explored its specialty shops and bringing home something truly original. We've compiled a list of gifts and souvenirs, which are unique to Seville, that a visitor might like to purchase to reflect their visit.

It would be a pity to leave Seville without having explored its specialty shops and bringing home something truly original. We've compiled a list of gifts and souvenirs, which are unique to Seville, that a visitor might like to purchase to reflect their visit.

Seville is one of the most glorious cities of Spain. The streets of Seville retain plenty of historical and cultural weight. One of the city's most impressive features is the architecture, especially the Spanish Baroque style. This style has been mostly used in notable religious structures of Seville that are showcased on this walking tour.

Seville is a city with a rich cultural heritage, mainly because of its varied history. Visitors can discover traces of Seville's rich historical background and culture in the old city area of Seville. Full of monumental sights and romantic scenes, central Seville is the subject of this walking tour.