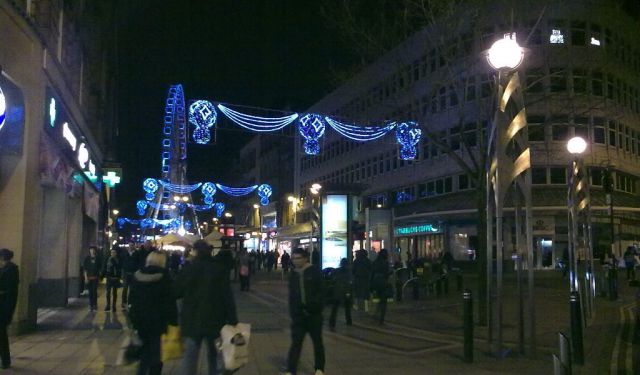 Image by St BC on Wikimedia under Creative Commons License.

Sheffield is not only a city of history, culture, and famous landmarks, but also popular due to its ultra modern nightlife. The clubs in Sheffield are often visited by people from around the world (including some famous personalities) and reasonable so. Here you will find famous musicians, outstanding decorations, prime food and drinks, as well as plenty of entertainment options such as dancing.
How it works: Download the app "GPSmyCity: Walks in 1K+ Cities" from iTunes App Store or Google Play to your mobile phone or tablet. The app turns your mobile device into a personal tour guide and its built-in GPS navigation functions guide you from one tour stop to next. The app works offline, so no data plan is needed when traveling abroad.

Frog & Parrot features a very mixed clientèle - from students in their 20s to businessmen in their 40s. Frog & Parrot is especially regarded for its fantastic beers. Also, the club hosts a large variety of live bands and DJ's. Last but not least, visitors may watch football on the large screen television.
Image by Gregory Deryckère on Wikimedia under Creative Commons License.
2

The club is known for playing a variety of rock music, although it also hosts nights such as 'skool disco' which is predominantly indie and 90's pop music. Live acts are viewed before the club nights begin which are housed in one of the two ground floor spaces. A further room exists upstairs, which is available only during club nights; this room has a balcony overlooking the rooms dance floor. The club is one of the major rock clubs in England and rivals the multiplicity of Rock City (club) in Nottingham as both a rock club and live venue.
Image by asw909 on Flickr under Creative Commons License.
Sight description based on wikipedia
3

Plug is a wonderful venue which combines the three rooms - Live, Neutral, and Earth - into a very special experience. The prices as Plug are very reasonable, as is the fantastic music and excellent drinks. The nightclub also features amazing artists, from Asian Dub Foundation to Natty.
Image by Subterranean Tourist Board on Flickr under Creative Commons License.
4

Lord Nelson is the spot for individuals who prefer seafood. The restaurant incorporates a pirate theme, attracting a large number of visitors. Also, the staff is decorated in special costumes and are really friendly. Drinks are also fairly cheap and the menu is really diverse. Music played at Lord Nelson ranges from jazz to pop.
Image by Andy Pettigrew on Flickr under Creative Commons License.
5

Royal Standard is a very comfortable and warm place to spend your night. The music played is not very loud, and includes a lot of light dancing and pop hits. The interior is richly decorated with very nice furniture. Last but not least, the staff is very well educated, classy, and insightful. Royal standard truly greets you with an upper class experience.
Image by Gregory Deryckère on Wikimedia under Creative Commons License.
6

The Leadmill is a live music venue and nightclub in Leadmill Road, Sheffield, England lying on the south east edge of the city centre. It opened in 1980. The venue has also been voted favorite live music venue by readers of the NME on several occasions. The venue has recently hosted many gigs by bands such as Milburn, Coldplay, Snow Patrol, Killers, Enter Shikari, Klaxons, The Coral, Kids In Glass Houses, Elliot Minor, One Night Only, The Audition, The Maccabees and Sheffield's own Arctic Monkeys who in 2005 sold out the Leadmill in a quicker time than any other band.
Image by Warofdreams on Wikimedia under Creative Commons License.
Sight description based on wikipedia
7

Howard is a typical English lounge/pub. The venue serves amazing fish and cheese, as well as classic beer and the best tea in Sheffield. Howard is also a pretty quiet place if you are looking to avoid the noise. Also, the occasional jazz band will perform for lucky customers.
Image by Gregory Deryckère on Wikimedia under Creative Commons License.
8

The Globe, if you could possibly summarize it into just one word would probably be - awesome! The Globe is loaded with a plethora of great features including phenomenal music with great DJ's, wonderful interiors, friendly staff, great drinks, and even better cocktails. Make sure you do not miss out on everything The Globe has to offer.
Image by Gregory Deryckère on Wikimedia under Creative Commons License.
9

The Graduate obviously caters to the college crowd. Here, you will enjoy loud hits and one of the longest parties in the city. Each day The Graduate features a different specialty drink, sure to keep customers coming back for more. Also, the dance floor is divided into two sections, thus allowing plenty of room to really the night with friends and family.
Image by marfis75 on Flickr under Creative Commons License.