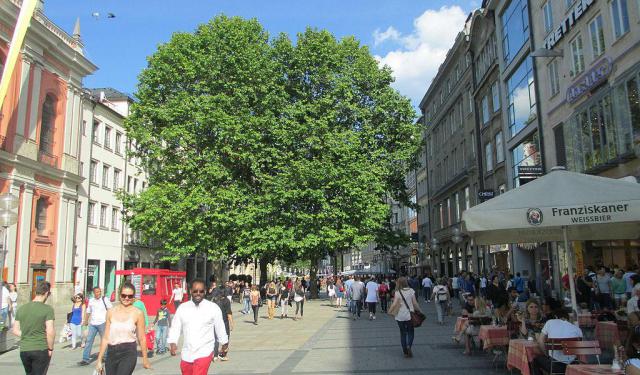 Munich city is a shopper’s delight with departmental stores, large international brands and local boutique shops jostling for space. The main shopping areas are the Neuhauserstrasse and Kaufingerstrasse. The best part about shopping in the city is the bargains that you can get. German style competition ensures that the prices are reasonable. Pick up your favorites from traditional garments, beer mugs or local handicrafts as mementos from your visit on this self guided tour.
How it works: Download the app "GPSmyCity: Walks in 1K+ Cities" from iTunes App Store or Google Play to your mobile phone or tablet. The app turns your mobile device into a personal tour guide and its built-in GPS navigation functions guide you from one tour stop to next. The app works offline, so no data plan is needed when traveling abroad.

This shopping zone in central Munich is a complete pedestrian zone and is just a few steps away from the Hauptbahnhof. Modern stores like Zara, H&M, C&A, Mango, Karstadt, Kaufhof, Zero and many more are located here. Streetside vendors selling flowers, fruits, vegetables, roasted nuts, souvenirs add a different charm to the place. Numerous outdoor cafes allow you to take a break between your shopping, sit and watch people or just admire the architectural splendor of the surrounding buildings.

Tip:
If you're in the city center but want to shop away from the mainstream stores, Sendlinger straße may have a bit more variation.

Image by M(e)ister Eiskalt on Wikimedia under Creative Commons License.
2

The Sendlinger Strasse is one of the oldest shopping streets of Munich, located in the heart of the city in the Aldstat or the Old Town. A pedestrian zone, this street is home to smaller shops selling antiques, handicrafts, books and jewelry. Most of these shops are family owned enterprises that have survived for generations. The street starts at Sendlinger Tor and connects is to the Marienplatz.
Image by dustpuppy on Flickr under Creative Commons License.
3

The Viktualienmarkt is located a few meters away from Marienplatz in Munich. It is a daily open air farmers market that consists of stalls selling flowers, vegetables, fruit and meat.

The first central market of Munich was in Marienplatz. As the city prospered, the square became too small for the growing number of shops. King Maximilian of Bavaria decided to demolish the nearby Heiliggeist charitable hospital to provide a larger space for the market. At the time the square was called Marktplatz. The name was later changed to Viktualienmarkt. Viktuel is the Latin word for food. Halls were added as the city grew richer and separate pavilions for fish, fowl, meat and bakery items were installed. The bombs of World War II almost completely destroyed the market. It was rebuilt after the war by the city authorities, and fountains and other decorative elements were added to make it more attractive. Today, Viktualienmarkt has over 140 shops selling gourmet food, exotic fruit cheeses, pastries, sausages and venison. Folk events, like dances, music performances, Brewer’s Day, Gardener’s Day celebrations, a special event marking the opening of the asparagus season, a summer festival and the Shrove Tuesday dance of the Market women, take place here throughout the year. From 1975, it has been a pedestrian zone and a popular meeting place for locals and visitors.

Situated in the heart of the Viktualienmarkt, the Beer Graden is a nice place to take a break among the shaded chestnut trees. The place can sit a1000 people and offers sumptuous Bavarian specialties like the potato salad, pork roast and homemade cheese. Good Bavarian beer is served here. The place is open from 9am to 10pm in the summer and from 9am to 6pm in the winter and stays closed on Sundays and holidays.

Image by Pixelteufel on Flickr under Creative Commons License.
Sight description based on wikipedia
4

The western portion of Maximilianstrasse is a shopping street in the city centre of Munich. The place is well known for luxury boutiques, jewelry stores and designer shops. Famous brands like Gucci, Bulgari, Louis Vuitton, Dior, Chanel, Versace and other big names have their presence here.
Image by FotoVero84 on Flickr under Creative Commons License.

Munich city is a conglomerate of palaces that reflects a variety of styles. The enormous palaces have a long history and some of them have been added to and rebuilt over the centuries. While some were built to be royal residences, others were used as hunting lodges, temporary residences or castles. The palaces reflect a wonderful mix of renaissance, baroque and rococo styles of architecture.