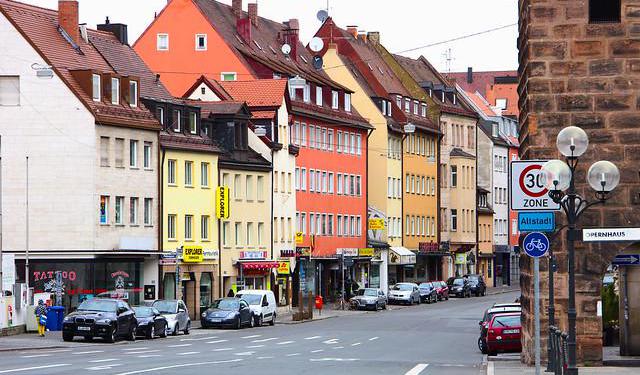 Image by দেবর্ষি রায় on Flickr under Creative Commons License.

Historical Nuremberg attracts thousands of tourists each year. Known for its Christmas markets, beer, sausage, gingerbread and toys, the city center is rich in small shops and large markets. Just walk down Altstadt and you’ll find anything you want.
How it works: Download the app "GPSmyCity: Walks in 1K+ Cities" from iTunes App Store or Google Play to your mobile phone or tablet. The app turns your mobile device into a personal tour guide and its built-in GPS navigation functions guide you from one tour stop to next. The app works offline, so no data plan is needed when traveling abroad.

Lebkuchen Frauenholz, a bakery famous for its gingerbread, has a special place in the city’s history. Be sure to check out this little shop where you can taste and buy freshly baked Nuremberg gingerbread and honey as well.

Image by andreasfuchsoktober on Flickr under Creative Commons License.
2

Christkindlesmarkt takes place during Advent in the Hauptmarkt, the central square in Nuremberg’s old town, and in adjoining squares and streets. With about two million visitors a year, it is one of the largest Christmas markets in Germany and one of the most famous in the world. Every year the Christmas market begins on the Friday preceding the first Sunday in Advent and ends on December 24, unless that day is a Sunday.

Historians assume that the market has its origins in traditional sales at the weekly market between 1610 and 1639 and that it gradually evolved into an independent market. Originally, the market opened on Thomas’ Day, December 4. Due to the large number of visitors, opening day was rescheduled to the Friday before the start of Advent in 1973 and has remained so ever since.

Tip:
In addition to the stalls where you can eat, drink and buy gifts, you will see a team of Clydesdale horses pulling a bright yellow stagecoach sponsored by the German Communications Museum. The inexpensive 10-minute ride around the market is and is available from 1 to 7pm daily.


Image by Ailura on Wikimedia under Creative Commons License.
Sight description based on wikipedia
3

Mandy Shoes & Accessories is where you can find trendy shoes and accessories from world famous designers, such as Joop. It carries an especially wide selection of women’s footwear for all occasions.

Trodelmarkt is a great 1,000 square meter flea market located between Karlsbrücke and Unschlittplatz. A variety of goods can be bought from its many vendors, including toys, jewelry and much more.
Image by Andreas Praefcke on Wikimedia under Creative Commons License.
5

Obletter is one of the largest toy manufacturers in Germany. It has been a subsidiary of Müller since 1997. Müller on Königstraße is a large store that besides other Müller products, features a fantastic selection of toys, with anything from carved wooden dolls to video games. Be sure to visit this wonderful store to find the perfect gift for children or friends.