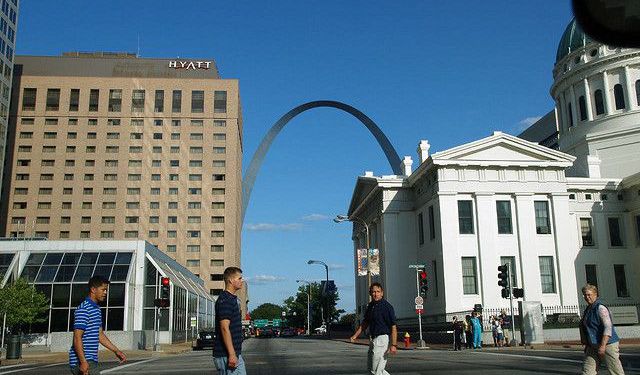 Image by paparutzi on Flickr under Creative Commons License.

Saint Louis was founded in 1764. Today, it is one of the most interesting and attractive cities in the United States. Besides some of the most interesting tourist attractions, it also offers a fascinating shopping experience. Take this walking tour to explore some of the most famous specialty and antique shopping places in Saint Louis.
How it works: Download the app "GPSmyCity: Walks in 1K+ Cities" from iTunes App Store or Google Play to your mobile phone or tablet. The app turns your mobile device into a personal tour guide and its built-in GPS navigation functions guide you from one tour stop to next. The app works offline, so no data plan is needed when traveling abroad.

Mama Figlia is a colorful shop in Saint Louis. Here you can find a wide range of items, such as jewelry, purses, sweaters and necklaces for women, quality silk ties for men, Italian wines and sweets, and much much more. The works of art of local and international artists are displayed here as well.
Image by LoulasBoutique on Flickr under Creative Commons License.
2

MacroSun is an amazing shop that works directly with different artists and craftsmen from different countries and places, including Asia. Here you can find all kinds of things such as jewelry, fashion, books, etc. The prices vary according to the historical value of the item.

Image by ellenm1 on Flickr under Creative Commons License.
3

St. Louis Union Station, a National Historic Landmark, was a passenger train terminal in St. Louis, Missouri. Once the world's largest and busiest train station; in the 1940s, it handled 100,000 passengers a day. As airliners became the preferred mode of long-distance travel and railroad passenger services declined in the 1950s and 1960s, the massive station became obsolete and too expensive to maintain for its original purpose. It was converted in the early 1980s into a hotel, shopping center, and entertainment complex. Today, it serves only local rail transit passengers. At its height, the station combined the St. Louis passenger services of 22 railroads, the most of any single terminal in the world.

Why You Should Visit:
The Grand Hall is magnificent with statues, stained glass and the "whispering arches" at the front door.

Tip:
A light show happens every hour from 5-11pm. It is on the ceiling of the historic Grand Hall. There are comfortable seats and a full-service bar.


Image by David Nichols on Flickr under Creative Commons License.
Sight description based on wikipedia
4

Grand Petite Market offers a vast selection of wines, sweets, culinary items, gifts and much more. Here you can also find candles, glassware, cookware, blankets, chairs and many other useful items. If you would like to buy a good gift for a birthday, wedding, anniversary or other events, there is a great chance you will find it at the Grand Petite Market.

Looking Glass Designs may prove a great shopping experience for you in Saint Louis. It offers a vast selection of handmade gifts such as jewelry, bags, wine accessories and others. Handmade beaded jewelry can be a good choice for a birthday present. A wide choice of home décor items and glassware is available here as well. Don't miss the chance to visit this wonderful store.

The Porch is a good shop to find something interesting to buy. Browse through its wide selection of unique gifts, home and garden furnishings, and sure enough you will find something that fits your taste, mood and pocket. Here is also a vast collection of wines, most of which are under $25 a bottle. Each Saturday you can taste the wines for free.

Soulard Farmers Market was founded in 1779. Today, it is one of the top spots for socializing and shopping in Saint Louis. Here you can find an amazing variety of products. The market is open all year around, from Wednesday to Saturday.