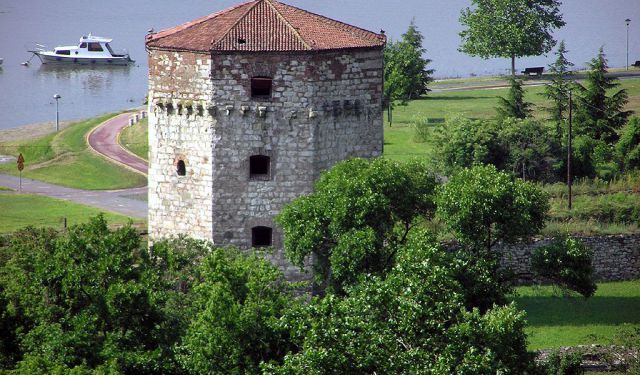 Image by Dungodung on Wikimedia under Creative Commons License.

Despite being devastated many times in the past, Belgrade has retained much of its rich history, reflected in the city's architecture - streets, bridges and squares. Presented here are some of the not-to-be-missed must-sees in the Serbian capital.
How it works: Download the app "GPSmyCity: Walks in 1K+ Cities" from iTunes App Store or Google Play to your mobile phone or tablet. The app turns your mobile device into a personal tour guide and its built-in GPS navigation functions guide you from one tour stop to next. The app works offline, so no data plan is needed when traveling abroad.

This bridge was built in 1957 to replace the former chain-stayed King Aleksandar I bridge that was opened on December 16, 1934, and blown up in 1941. The new bridge actually uses the lower parts of its predecessor's pylons (decorated by Ivan Meštrović in Serbo-Byzantium style) as outer constraints for its two secondary spans. It has a dual carriageway with three lanes in both directions, and consists of two separate constructions for each direction. The second one was finished in 1979. It is 450 m long, made as a continuous steel box girder, with a central span of 261 m and side spans of 81.5 m each. Nearly 90,000 vehicles cross the bridge daily, and the traffic congestion is frequent. The bridge's name is unofficial and seems to come from a bizarre chain of events. Its official name during the communist rule was "The Brotherhood and Unity Bridge."
Image by Atipiks on Wikimedia under Creative Commons License.
Sight description based on wikipedia
2

Terazije is a square and a neighborhood in Belgrade's municipality of Stari Grad. Terazije started to take shape as an urban feature in the first half of the 19th century. Back in the 1840s, Prince Miloš Obrenović ordered Serbian craftsmen - mostly blacksmiths and coppersmiths - to move out of the old moated town, where they had been mixed with the Turkish inhabitants, and to build their houses and shops in the place of the present square. Another reason for the move was to prevent fire hazard. Ilija Čarapić, the president of the Belgrade Municipality in 1834-35 and 1839-40, had a special task of allotting free lands at Terazije to those craftsmen and whoever else agreed to relocate.
Image by Michael Angelkovich on Wikimedia under Creative Commons License.
Sight description based on wikipedia
3

Located in Stari Grad, Nikola Pašić Square is a direct extension of Terazije. It extends further into Belgrade's longest street, King Alexander Boulevard, while Dečanska Street connects it to the Republic Square. Named after Nikola Pašić, the prominent Serbian politician and Prime Minister of the early 20th century, the square lies in front of the monumental National Assembly building. The square was built in the 1950s as part of a massive Terazije reorganization project. Its original terrain was so hilly that tonnes of earth had to be removed in order to make the construction possible. Inaugurated as Marx and Engels Square, in honor of the famous communist ideologues, subsequently, it was one of Belgrade's first locations to change its name with the loosening of the communist ideology in the late 1980s.
Image by Matija on Wikimedia under Creative Commons License.
Sight description based on wikipedia
4

Skadarlija is an old street, a neighborhood, and a former municipality in Belgrade. Part of the Stari Grad (Old Town) area, it is generally regarded as the main bohemian quarter of the city, styled as a local "Montmartre". The history of Skadarlija began in the 1830s with the settlement of gypsies in the abandoned trenches in front of the ramparts. The 1854 town plan had the gypsy hovels eventually replaced by brick buildings into which artisans, caterers, and petty clerks moved. Up until 1872, the locality had been known as the Gypsy Quarter. Afterwards, the street was named after the town of Skadar (today's Shkodër in Albania), which was part of the medieval Serbian state. Skadarska ulica, "Skadar Street", has since been the official name.
Image by LukaP on Wikimedia under Creative Commons License.
Sight description based on wikipedia
5

The National Theatre of Belgrade was built in 1869 to the design of Aleksandar Bugarski, the most productive local architect of the 19th century. The decision to have a purpose-made theatre building was taken by Knez (Prince) Mihailo Obrenović. Typical of its time, the edifice is reminiscent of that of La Scala in Milan, in terms of Renaissance conception and decorative finish. Later reconstructions have completely changed its original appearance. Following a major "facelift" in 1986, the theatre regained its 1922 look, and was supplemented with an annex towards Braće Jugovića Street. Back in the 19th century, other than for theatrical performances, the building was often used for charity balls and concerts. It also saw the Great Constitutional Assembly adopt the historic 1888 Constitution.
Image by BraneJ on Wikimedia under Creative Commons License.
Sight description based on wikipedia
6

Studentski Trg, or Student Square, is one of Belgrade's central locations. Situated halfway between the Republic Square to the east and the Kalemegdan Park Fortress to the west, it is adjacent to Akademski Park. To the north it extends into the Upper Dorćol neighborhood, while the pedestrian zone of Knez Mihailo is located to its south. The entire area is a host of educational and cultural institutions, hence the names - Student Square, Academy Park. Also located here are the Ethnographic Museum, the "Plato" bookstore, and a monument to Njegoš.
Image by BoskoM on Wikimedia under Creative Commons License.
Sight description based on wikipedia
7

Prince Michael Street is a pedestrian zone and a major shopping venue, protected by the law as one of the oldest and most prominent city landmarks. It hosts a great number of impressive buildings that date back to the late 1870s. The street follows the central grid layout of the Roman city of Singidunum. Under the Turks, it was lined with gardens, drinking-fountains and mosques. In the middle of the 19th century, the upper part of the street bordered the garden of Knez Aleksandar Karađorđević. Shortly after the implementation of the regulation plan of Belgrade (1867), by Emilijan Josimović, the street had gained its current look and architecture, seeing many houses built by some of the most influential and wealthiest families of Belgrade society. In 1870, the municipal authorities officially named the street as Ulica Kneza Mihaila (Prince Michael Street).
Image by Λατίνος on Wikimedia under Creative Commons License.
Sight description based on wikipedia
8

The National Bank of Serbia is located on Kralja Petra Street in the center of Belgrade. The building was completed between 1888 and 1890, while the bank itself is believed to be established on March 16, 1884, upon the receipt of a pertinent formal letter from the Minister of Finance. The bank commenced operations on July 2, on which day it had issued the first promissory note. The National Bank of Serbia was modeled on the Belgian National Bank.
Image by Lumen roma on Wikimedia under Creative Commons License.
9

Kalemegdan is a fortress and a park in Belgrade's municipality of Stari Grad. Kalemegdan was declared a Monument of Culture of Exceptional Importance in 1979, and has since been protected by the government. Kalemegdan is a core and the oldest part of Belgrade; for centuries, the entire city population had lived within its walls. For the most part, the history of Kalemegdan Fortress is the history of Belgrade itself. The first mention of the city - then known as "Singidunum" - dates back to the 3rd century BC, when the Celtic tribe of Scordisci established a fort after having defeated the neighboring Thracian and Dacian tribes. The city-fortress was later conquered by the Romans, became known as Singidunum, and was made part of "the military frontier" of the Roman Empire facing the "barbaric Central Europe".
Image by Raphaëlle MARTIN on Wikimedia under Creative Commons License.
Sight description based on wikipedia