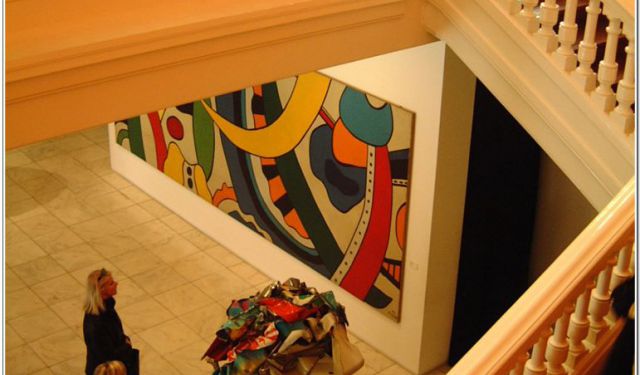 Image by korom on Flickr under Creative Commons License.

Sintra is very popular among visitors to Portugal. During the thousands of years of its history a tremendous heritage was collected, reflecting its development and cultural level in different periods. Such items are displayed in the city’s museums and art galleries. The city boasts unique collections of fossils, art objects and toys. A visit to the memorial houses of Sintra's distinguished figures will tell you about their grand contributions to Portugal's culture.
How it works: Download the app "GPSmyCity: Walks in 1K+ Cities" from iTunes App Store or Google Play to your mobile phone or tablet. The app turns your mobile device into a personal tour guide and its built-in GPS navigation functions guide you from one tour stop to next. The app works offline, so no data plan is needed when traveling abroad.

The Ferreira de Castro museum, opened in 1982, is dedicated to the life and activity of the famous Portuguese writer. Ferreira de Castro was the most translated writer in the country. The writer was born in this house in 1898. The two-story museum presents different periods of the writer’s life. You will find his works translated in many languages in the last exhibition room.
Image by Romanito on Flickr under Creative Commons License.
2

National Palace of Sintra is a unique historical monument of its kind: built in the 12th century, it is still well-preserved. As the only surviving Royal Palace from Medieval times, is was built specifically in the Portugal Mudejar style, decorated with Hispanic-Moorish glazed tiles. Through continuous rebuildings, renovations and improvements over the centuries, it now bears certain Renaissance features. The palace has numerous halls, corridors, and rooms through which you can admire its terrific design and decorations. Since 1940 the National Palace has been a museum displaying medieval history, art and culture. Halls designed in different styles have old furniture and utensils, paintings, sculptures and other art objects. The Palace was included in the UNESCO world heritage list.
Image by Thomas on Wikimedia under Creative Commons License.
3

3) Museum of Anjos Teixeira (must see)

The Museum of Anjos Teixeira displays the works of the Anjos Teixeira family. The building in which the museum opened in 1976 was once their house. The greatest works of two genius contemporary sculptors, father and son, are displayed in the museum. In 2008 a complete renovation of the exhibition space was held. You can see the sculptures in the court as well.
Image by Ludgero Paninho on Flickr under Creative Commons License.
4

The New Natural History Museum was opened in 2009 and corresponds with international standards. It is located in the 19th century building of a former market. The collection of fossils belongs to researcher Miguel Barbosa who collected them during the last 40 years. The museum has a rare collection of dinosaurs, their eggs and nests, meteorites, and different fossils dating million years. But the most significant exhibit is a unique example of a flying reptile, Braseodactylus. The Museum has permanent and temporary exhibition halls, a shop and café. The design of the halls greatly impresses visitors with its brightness and modernity.
Image by Ana Reis on Flickr under Creative Commons License.
5

Located in a former garage of electric cars, the Live Sciences Museum was opened to promote science and technology. The human body and water are the main themes of exhibitions. Here you will see devices working thanks to the power of water and sun; you can observe human skin, insects and other objects in microscopes as well as observe your inner heat and your heart working; you can ride a high-wire bicycle, test your short term memory and many other interesting things. The Museum of Live Sciences is unique in Portugal.
Image by larabacate on Flickr under Creative Commons License.

Sintra boasts diverse architecture, combining such styles as Romanesque, Gothic, Neoclassical, Renaissance and (typical for Portugal) Manueline. The city’s wonderful religious buildings date back to the Middle Ages and are still well-preserved. Palaces and castles never fail to impress visitors with their grandiosity and magnificent scenery of the city from the hills on which they stand. Take...  view more