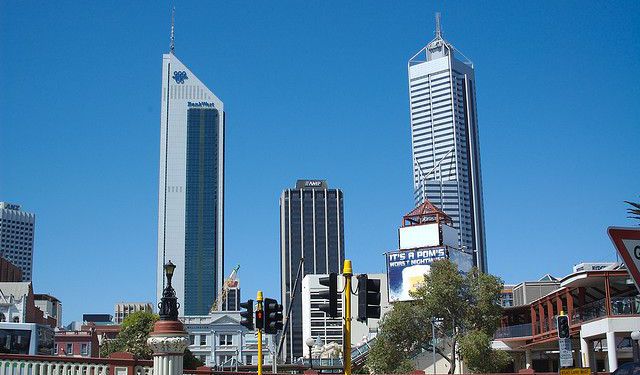 Image by ange_m0nk on Flickr under Creative Commons License.

Skyscrapers have always been the calling card of Perth. These huge buildings are an example of modern technology, and they are intertwined with the spirit of the time. Their rooftops are often hidden in the clouds. We offer you a walking tour through the highest and most famous skyscrapers in Perth:
How it works: Download the app "GPSmyCity: Walks in 1K+ Cities" from iTunes App Store or Google Play to your mobile phone or tablet. The app turns your mobile device into a personal tour guide and its built-in GPS navigation functions guide you from one tour stop to next. The app works offline, so no data plan is needed when traveling abroad.

QV.1 is a 40-storey modernist skyscraper completed in 1991. The 163-metre (535 ft) building is presently the fourth-tallest building in Perth, after Central Park, the yet to be completed BHP Tower and the BankWest Tower.

The project was designed by architect Harry Seidler and has won numerous awards for its innovative design and energy efficiency. According to architect Harry Seidler, one of the architectural objectives in the design of QV.1 was to minimise the impact of the tower when viewed from Parliament House, and this was addressed by offering a narrow profile to that direction. Another of the design briefs identified by Harry Seidler was that the building should employ passive design in order to minimise energy costs. This is achieved through the use of tinted double glazed windows, as well as the installation alongside windows of horizontal and vertical sun shades. The use of sun shades alone was estimated to reduce the building's cooling costs by $70,000 per year. The building also features separate air-conditioning units for each floor, so that energy does not need to be wasted cooling or heating unoccupied floors.

The modernist building was criticised for being "Perth's most ugly building" and "a giant Lego block", but architect Harry Seidler described QV.1 as "the best building he had ever built".

Image by torres21 on Flickr under Creative Commons License.
Sight description based on wikipedia
2

Woodside Plaza is a 29-storey skyscraper that serves as the headquarters for Woodside Petroleum and incorporates several energy-efficient design features. When completed in 2004, the building was the first premium-grade skyscraper completed in Perth since Central Park in 1992. It is currently the sixth tallest skyscraper in Perth.

The tower was designed by architects Kann Finch Group. The structure is of concrete frame, with a conventionally reinforced jump-formed core containing all of the lifts, stairs and service risers. The office floors are formed from post-tensioned band beams supporting conventional reinforced slabs. The perimeter of the building has columns spaced 8.2 metres (27 ft) apart and supporting post-tensioned edge beams. Woodside Plaza has two basement levels, two plant floor levels, 23 office floor levels, a mezzanine and the ground floor, giving a total of 29 floors.

The tower is noted for its efforts towards efficient energy use. For instance, the building's air conditioning plant utilises variable-speed fans to consume less energy when extra cooling is unnecessary, and the floors are divided into several air conditioning zones. Internal lighting dims when natural ambient light is brighter, and the heat load of the building is reduced through the use of "low emissivity" glass on the building's facade.

Central Park is a 51-storey office tower which measures 226 m (741 ft) from its base at St Georges Terrace to the roof, and 249 m (817 ft) to the tip of its communications mast. Upon its completion in 1992, the tower became the tallest building in Perth. It is also currently the ninth tallest building in Australia.

The building is formed by a composite steel and concrete frame, with various setbacks in its profile, meaning the upper floors are much smaller in area than lower levels. Outrigger trusses at the top of the building and at the various setbacks help to stiffen the building's reinforced concrete core against the strong winds prevalent in the area. The base of the building features a small park, for which the tower is named. Central Park was noted upon its opening for being technologically advanced, with "fully computerised air conditioning", which uses data from 1,400 sensors on each floor to regulate temperatures in an energy-efficient way. From its uppermost floors, there are views out to Kings Park and the Indian Ocean.

Construction on the tower started in 1988, with South Perth firm Bruechle Gilchrist & Evans as the project engineers. The building was constructed in a modular method, whereby floor slabs were pre-cast off-site and simply dropped into the steel frame of the tower as construction progressed. Major structural work on Central Park concluded with the installation in 1992 of its communications mast.

140 St Georges Terrace is a 30-storey skyscraper in Perth. Opened in 1975, the 131-metre (430 ft) tower was known as the AMP Building or AMP Tower after its owner and former flagship tenant, AMP Limited. The building became the tallest completed skyscraper in Perth in 1975, a title which it held only until 1976, when Allendale Square was opened.

140 St Georges Terrace features a service core design, with the concrete core containing the lifts and two stairwells. The perimeter of the square cross-section tower features load-bearing columns, allowing the office floors to remain mostly column-free. The building has 28 office levels, in addition to the ground floor, basement levels and plant room. According to Emporis, the 29th (top) floor was once an observation level which closed following the construction of the taller BankWest and Central Park towers around it.

The Bank West Tower is a 52-storey office tower that was completed in 1988. The building measures 214 metres (702 ft) to its roof and 247 metres (810 ft) to the tip of its communications antenna. It was the tallest building in Perth from its completion in 1988 until 1992 when it was overtaken in height by Central Park. As of 2009, it remains the second-tallest building in the city. The concrete tower has a distinctive profile, with a triangular plan.

The site occupied by the tower was home to the Palace Hotel, and organised opposition was formed to try to save that building from demolition to make way for an office tower. The site was subsequently acquired by businessman Alan Bond and the tower was approved and constructed in a plan that would retain much of the Palace Hotel. The tower then remained the headquarters of Bond's companies until their collapse.

The tower was designed by architects Cameron Chisolm & Nicol. The major parameter given to them in the planning of the building was that "all office areas should face the excellent views that exist of the Swan River". Working within this brief, they selected a triangular cross-section of the tower because it lent "itself to open plan office layouts" by allowing natural light to reach most parts of the working floors.

Allendale Square is a 32-story skyscraper. When opened in 1976, the building became the tallest completed building in Perth. The tower is located on a large site, however, the tower itself only occupies 25% of this land area. Designed by architects Cameron, Chisolm and Nicol, the building is rotated 45 degrees relative to St Georges Terrace, in order to secure a plot ratio concession from the Perth City Council. The walls of the tower are stepped in plan, creating V-shaped protrusions along each face. In order to maximize views towards the Swan River, the building has windows only on the North and South-facing sides of these steps, and the remainder of the tower is clad with aluminum. The building has been described as a fine example of high-rise architecture, timeless, one of Perth's most prominent office buildings, a building of considerable elegance, and a good building representing its time.
Image by Daniel Kelpe on Wikimedia under Creative Commons License.
Sight description based on wikipedia
7

Exchange Plaza is the State headquarters of the Australian Securities Exchange. Construction on the building started during the 1980s property boom at a cost of between A$220 million and $230 million. The tower was built by Multiplex, topping out occurred in mid-1991 and construction completed in 1992.

Exchange Plaza was designed by architects Peddle Thorp & Walker. It is a steel-framed structure with pre-cast concrete floor panels. The exterior of the building is fully glazed with curtain walls, which step back at the upper levels. The unique blue glass was produced in a one-off batch by Pilkingtons Australia. The building features a 150-seat conference centre and uninterrupted river views from most levels all across Perth Water and west all the way to Rottnest Island. The building has 34,479 square metres (371,130 sq ft) of net lettable area across 33 commercial office levels. In addition there are three plant floor levels and five basement parking levels, with 236 car parking spaces.