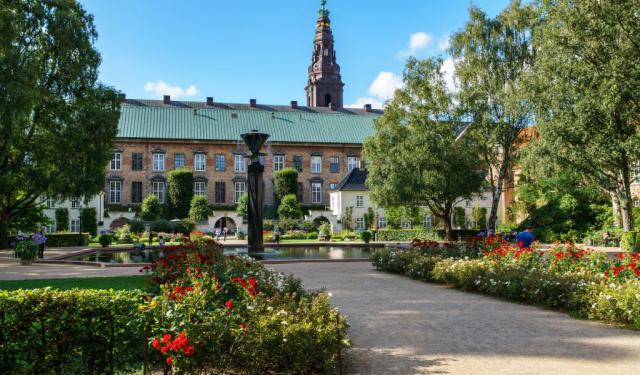 Image by denisbin on Flickr under Creative Commons License.

Slotsholmen, translated as The Castle Islet, is an island in the harbour of Copenhagen. Recognized as the center of the Government of Denmark since the Middle Ages, the island is sometimes referred to as "the Island of Power". Take this tour to explore the Castle Islet with us.
How it works: Download the app "GPSmyCity: Walks in 1K+ Cities" from iTunes App Store or Google Play to your mobile phone or tablet. The app turns your mobile device into a personal tour guide and its built-in GPS navigation functions guide you from one tour stop to next. The app works offline, so no data plan is needed when traveling abroad.

The Thorvaldsen Museum is a single-artist museum in Copenhagen, dedicated to the art of Danish neoclassicistic sculptor Bertel Thorvaldsen (1770–1844), who lived and worked in Rome for most of his life. The museum is located on the small island of Slotsholmen in central Copenhagen next to Christiansborg Palace. Designed by Michael Gottlieb Bindesbøll, the building was constructed from 1838–48.

The building is strongly inspired by antique Greek architecture and built around an inner courtyard where the artist is buried. The courtyard is notable for being painted in Egyptian motifs: tall date palms; lions and crocodile prowl among exotic birds and plants. The Egyptian influence on the exterior is more chaste. Here, enormous doors in severe trapezoidal style define the architect's intentions to pay homage at once to Attic Greek, Pompeian and Egyptian style. It is noteworthy for its unique use of colors both inside and outside. Every room in the museum has a unique ceiling decoration in the grotesque style. The outside is adorned with a frieze depicting Thorvaldsen's homecoming from Rome in 1838, made by Jørgen Sonne.

The museum displays a comprehensive collection of the artist's works in marble as well as plaster, including the original plaster models used in the making of cast bronze and marble statues and reliefs, which are now on display in museums, churches, and at other locations around the world. The museum also features paintings, Greek, Roman and Egyptian antiques, drawings, and prints that Thorvaldsen collected during his lifetime, as well as a wide array of personal belongings that he used in his work and everyday life.

Why You Should Visit:
To be taken back to the classical XIX Century museums.
All the works of Thorvaldsen are masterpieces that tell you stories of gods, adventures and other Greek and Roman myths.

Tip:
Come on a Wednesday as it is free to enter on that day each week.
Don't forget to look up and down as you walk through the galleries.
Definitely get the audio guide which is organized well, and you have options to delve deeper as needed.


Image by Mahlum on Wikimedia under Creative Commons License.
Sight description based on wikipedia
2

Christiansborg Palace is a palace and government building on the islet of Slotsholmen in central Copenhagen. It is the seat of the Danish Parliament, the Danish Prime Minister's Office, and the Supreme Court of Denmark. Also, several parts of the palace are used by the Danish monarch, including the Royal Reception Rooms, the Palace Chapel and the Royal Stables.

The palace is thus home to the three supreme powers: executive, legislative, and judicial. It is the only building in the world that houses all three of a country's branches of government. The name Christiansborg is thus also frequently used as a metonym for the Danish political system, and colloquially it is often referred to as Rigsborgen ('castle of the realm') or simply Borgen ('castle').

The present building, the third with this name, is the last in a series of successive castles and palaces constructed on the same site since the erection of the first castle in 1167. The palace today bears witness to three eras of Danish architecture, as the result of two serious fires. The first fire occurred in 1794 and the second in 1884. The main part of the current palace, finished in 1928, is in the historicist Neo-baroque style. The chapel dates to 1826 and is in a neoclassical style. The showgrounds were built 1738-46, in a baroque style. Tourists from across the world come here to enjoy the unique ambiance and atmosphere at this famous palace in Copenhagen.

Why You Should Visit:
Beautiful, impressive rooms after rooms! The library is the stuff of dreams, and you could easily spend an hour looking at the modern tapestries.
The tour gives a breakdown of some of the symbolism in the most recent tapestry including references to 20th-century events.
In all, you get to see 4 sections at the palace: the royal rooms, the kitchens, the stables & the ruins, with also a Royal Theatre to check out.

Tip:
Always look out for the free English hour-long tours included in your ticket – they are at 3pm each day but also at different times in the weekends (12pm/2pm).
The tower is free! It is also the tallest in the city and the views are beautiful. There's a small elevator that takes groups of 8ish at a time to the top.

3) The Old Stock Exchange (must see)

The Old Stock Exchange was constructed by one of the greatest builders and architects of Copenhagen, King Christian IV. This is the oldest building in the city that served as a trade and financial center. The Danish stock market functioned in its premises until 1974, after which it was relocated to modern facilities.

King Christian IV constructed this impressive building right at the entrance of Copenhagen where it continues to serve as a prestigious landmark. The building stands as a testimony to the wealth and development of the city and was specially built to impress foreign as well as Danish merchants arriving from the sea. Since 1987, it has been serving as the Danish Chamber of Commerce.

On its roof, you will find an amazing, unusual spire with four dragons designed in Dutch Renaissance style. The three-crowned spear at the end of the twisting tails represents the friendship and cooperation between Denmark, Sweden and Norway. The Old Stock Exchange is 60 meters tall and is the only building that has survived all of Copenhagen’s great fires.

Why You Should Visit:
The spiral is definitely interesting to see up close (or zoomed in), as is the outside of the building.

Tip:
The inside is only accessible during Culture Night held every year in October, though the queue can get quite long.
Image by Alf van Beem on Wikimedia under Creative Commons License.
4

One of the most impressive libraries in the Nordic countries is the Royal Library in Copenhagen. At this library, you will find a rich collection of historical treasures collected meticulously from the 17th Century. Generous donations through ages have helped sustain this library that has the first ever Danish book on display. This book was printed in 1482 and is a part of an extensive collection that includes almost all books printed in this language.

King Frederik III founded the library in 1648 and stocked it with an extensive European collection. After it was opened to the public in 1793, this library became a part of the University Library following the merger in 1989. The Natural and Health Sciences Faculty Library joined the Royal Library through another merger in 2005. Today the library has an impressive collection that covers all subjects. It is spread over four sites each specializing in a subject.

Tip:
Entry to the library is free; public tours of the Black Diamond (modern extension) part of the Library are offered every Saturday at 3pm for a fee.
The Black Diamond on the canal is also great for taking photos (outside & inside) – be sure to go up and down the escalators, taking pictures as you do.
The on-site café is good, with seating outside on sunny days (there is also an excellent restaurant, "Søren K"), and you can buy something special in the small shop.

Constructed by Christian IV, kind of Denmark, the old Arsenal – a former storehouse of hand weapons and canons – now houses the Danish War Museum. This is one of the very few buildings in Denmark used for the specific purpose it was originally built for.

The way in which renaissance was centralized in Copenhagen and extended the Royal power is commemorated by this monumental building. The extent of influence held by the armed forces on the capital is evident with the models of the 18th-century citadel and of the Arsenal of King Christian IV.

The Arsenal Hall measures 156 meters and holds the distinction of being the biggest arched Renaissance hall in Europe. Here you will find on display some of the oldest and more recent Danish canons.

Visitors can go through the sequence of edged weapons and small arms development through the last 500 years. An amazing selection of modern and antique weapons that include exquisite handguns, war trophy firearms and beautiful princely, ornamental weapons are on display in the Renaissance Hall.

Here you will also find a fine collection of international firearms such as civilian and military guns, sports and hunting weaponry. The museum displays an impressive 19th-century collection of military accessories such as banners, uniforms, armor, and saddler.

The Nørreport area is one of the most colorful and culturally vibrant districts of Copenhagen. It is a region that mixes the old and the new, and features some of the best museums and art galleries the city has to offer. Discover Nørreport on this self guided walking tour.

Full of historic attractions and awe-inspiring landmarks, Copenhagen is considered one of the most beautiful cities in Scandinavia. The artistic and creative skills of the Danish people are on display throughout the city. Take this tour to explore the most famous sights in Copenhagen's Indre By (Inner city).