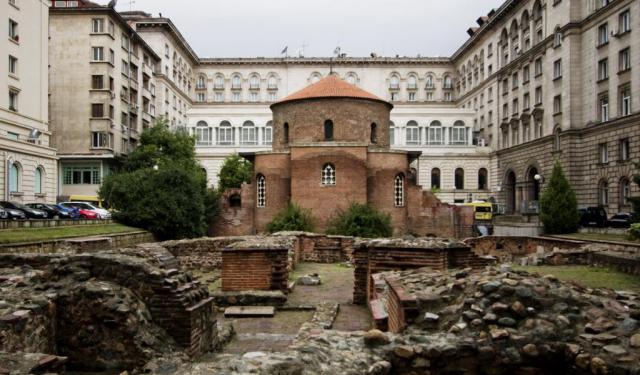 As the capital of a former communist country, Sofia has a number of imposing monuments and landmarks that recall the long history of Bulgaria. Make sure that you will take this self guided walking tour to visit some of the most amazing and important attractions in Sofia.
How it works: Download the app "GPSmyCity: Walks in 1K+ Cities" from iTunes App Store or Google Play to your mobile phone or tablet. The app turns your mobile device into a personal tour guide and its built-in GPS navigation functions guide you from one tour stop to next. The app works offline, so no data plan is needed when traveling abroad.

The architectural style is essentially Moorish Revival, with elements of the Vienna Secession and, in the facade, Venetian architecture. The main premise has a diameter of 20 m and is 31 m high. It is topped by an octagonal dome. The interior is richly decorated, featuring columns of Carrara marble and multicoloured Venetian mosaics, as well as decorative woodcarving. The entire building takes up 659 m².

Image by Olexandr Vynnychenko on Wikimedia under Creative Commons License.
Sight description based on wikipedia
2

The Hagia Sophia Church is the second oldest church in the Bulgarian capital Sofia, dating to the 6th century. In the 14th century, the church gave its name to the city, previously known as Sredets (Средец).

The Hagia Sophia Church is now one of the most valuable pieces of Early architecture in Southeastern Europe. The present building is a cross basilica with three altars. The floor of the church is covered with complex Early Christian ornamental or flora and fauna-themed mosaics. The Hagia Sophia Church stands in the middle of an ancient necropolis and many tombs have been unearthed both under and near the church. Some of the tombs even feature frescoes.

Because St. Sophia represents divine wisdom rather than a historical saint, icons within the church depict Sophia as a woman standing above three other women representing faith, hope, and love. The church also displays icons of historical saints, including St. George and St. Vladimir.

Image by Klearchos Kapoutsis on Wikimedia under Creative Commons License.
Sight description based on wikipedia
3

3) The Tomb of the Unknown Soldier

The Monument to the Unknown Soldier is a monument in the centre of Sofia, located just next to the 6th-century Church of St Sophia, on 2 Paris Street. The monument commemorates the hundreds of thousands of Bulgarian soldiers who died in wars defending their homeland. Ceremonies involving the President of Bulgaria and foreign state leaders are often performed here. The monument was designed by architect Nikola Nikolov and opened on September 22, 1981, the 1300th anniversary of establishment of the Bulgarian state.

The Monument to the Unknown Soldier features an eternal flame, turf from Stara Zagora and Shipka Pass, sites of two of the most important battles of the Russo-Turkish War of Liberation, a sculpture of a lion by the noted sculptor Andrey Nikolov, as well as a stone inscription of a stanza by the national writer Ivan Vazov.
Image by Jorge Láscar on Flickr under Creative Commons License.
Sight description based on wikipedia
4

Ivan Vazov was a well-known Bulgarian writer. His grave is situated behind the Saint Sofia Basilica in the center of the capital. The boulder for the grave was brought from Vitosha Mountain.
Image by Chris Hughes under Creative Commons License.
5

The St. Alexander Nevsky Cathedral is a Bulgarian Orthodox cathedral in Sofia. Built in Neo-Byzantine style, it serves as the cathedral church of the Patriarch of Bulgaria and is one of the largest Eastern Orthodox cathedrals in the world, as well as one of Sofia's symbols and primary tourist attractions. The St. Alexander Nevsky Cathedral in Sofia occupies an area of 3,170 square metres (34,100 sq ft) and can hold 10,000 people inside. It is the second biggest cathedral located on the Balkan Peninsula after the Cathedral of Saint Sava in Belgrade.

The Alexander Nevsky Cathedral is a cross-domed basilica featuring an emphasized central dome. The cathedral's gold-plated dome is 45 m high (148 ft), with the bell tower reaching 53 metres (174 ft). The temple has 12 bells with total weight of 23 tons, the heaviest weighing 12 tons and the lightest 10 kilograms (22 lb). The interior is decorated with Italian marble in various colours, Brazilian onyx, alabaster, and other luxurious materials. The central dome has the Lord's Prayer inscribed around it, with thin gold letters.
Image by Pudelek (Marcin Szala) on Wikimedia under Creative Commons License.
Sight description based on wikipedia
6

The monument is 13 m high, made of grey Balkan granite and designed by Czech architect Antonín Kolář. The bronze bas-relief of the head of Levski, part of the monument, was created by Josef Strachovský, whereas Italian Abramo Peruchelli did the stonecutting work. It was inaugurated on 22 October 1895, but was planned and worked on ever since the Liberation of Bulgaria in 1878, the construction being hindered by a chronic lack of funds and negligence, and taking a whole 17 years. This ignited a wave of indignation among the Bulgarian intellectuals of the time, with the poet Konstantin Velichkov even branding this carelessness in a 1881 poem.
Image by Bin im Garten on Wikimedia under Creative Commons License.
Sight description based on wikipedia
7

7) The Building of Bulgaria’s National Assembly

The National Assembly's main building has been proclaimed a monument of culture for its historic significance. Situated in downtown Sofia, it was designed in Neo-Renaissance style by Konstantin Jovanović, a Serbian-Bulgarian architect whose other works include the Parliament of Serbia building. It was constructed between 1884 and 1886 by Friederich Wilhelm Gustav Liebe, a young builder from Saxony who was only 22 years old when construction began.

The building is depicted on the reverse of the Bulgarian 20 leva banknote, issued in 1999 and 2007.

Due to insufficient space in the main building, some administrative offices of the National Assembly are now housed by the former headquarters of the Bulgarian Communist Party, located at the Largo.
Image by Nenko Lazarov on Wikimedia under Creative Commons License.
Sight description based on wikipedia
8

The Monument to the Tsar Liberator is an equestrian monument in the centre of Sofia. It was erected in honour of Russian Emperor Alexander II who liberated Bulgaria of Ottoman rule during the Russo-Turkish War of 1877-78.

The Neoclassical memorial's author is Italian sculptor Arnoldo Zocchi. Bulgarian architect Nikola Lazarov participated in the monument's architectural design. The foundation stone was laid on 23 April 1901, St George's Day, in the presence of Knyaz Ferdinand I of Bulgaria, and the monument was completed on 15 September 1903. Erected of black polished granite from Vitosha, the Monument to the Tsar Liberator consists of a pedestal, a middle part with figures and a massive Neo-Renaissance cornice finished with the sculpture of the Russian Tsar on a horse. The bronze wreath at the foot was donated by Romania in memory of the Romanian soldiers that died during the war.

The main bronze bas-relief in the middle part depicts a group of Russian and Bulgarian soldiers led by Nike, the Ancient Greek goddess of victory, who rises her sword high above. Portraits of Grand Duke Nicholas Nicolaievich, Count Ignatiev and the generals Joseph Vladimirovich Gourko and Mikhail Skobelev surround the group. Other bas-reliefs feature scenes from the Battle of Stara Zagora, the signing of the Treaty of San Stefano and the opening ceremony of the Constituent National Assembly in Veliko Tarnovo, as well as portraits of Petko Slaveykov, Stoyan Zaimov, Ivan Vazov, Stefan Stambolov and other prominent figures from the period.
Image by kuchin ster on Wikimedia under Creative Commons License.
Sight description based on wikipedia
9

This memorial was erected to commemorate the victims of the Communist regime. Standing in remembrance of all those who were shot, condemned and imprisoned, the memorial encapsulates the suffering of the whole Bulgarian nation.
Image by Mark Ahsmann on Wikimedia under Creative Commons License.
10

The National Palace of Culture, located in Sofia, is the largest multifunctional congress, conference, convention and exhibition centre in Southeastern Europe. It was opened in 1981.

The idea for the construction of this true contemporary castle comes from the former Bulgarian first-lady Lyudmila Zhivkova. The project was worked out by a team of Bulgarian and foreign architects, lead by Alexander Barov. The landscaping of Bulgaria Square in front of the National Palace of Culture was made by another team of architects and landscape engineers, lead by Atanas Agura. In July 2005, the National Palace of Culture was proclaimed the best congress centre in the world for the year by the International Organization of Congress Centres.

The congress centre has a wide variety of technical equipment at its disposal in order to host different types of events, such as concerts, conferences, exhibitions and shows. It has an area of 123,000 m² on eight floors and three underground levels. The National Palace of Culture has 13 halls and 15,000 m² of exhibition area, a trade centre and a car park. Sofia Film Fest, an annual film festival held in the capital of Bulgaria, Sofia takes place in NDK.
Image by Stanislav Trifonov on Flickr under Creative Commons License.
Sight description based on wikipedia