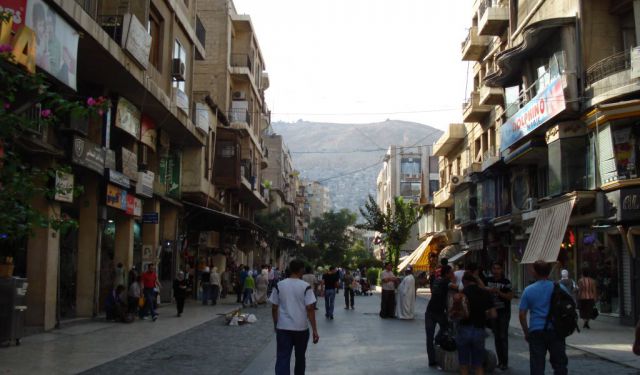 Image by Aziz1005 on Wikimedia under Creative Commons License.

Souq Medhat Pasha houses the Midhat Basha Bazaar, Babel Jaabiyah and other amazing attractions. Take the following tour to visit the most fascinating places in Damascus’ Souq Medhat Pasha district!
How it works: Download the app "GPSmyCity: Walks in 1K+ Cities" from iTunes App Store or Google Play to your mobile phone or tablet. The app turns your mobile device into a personal tour guide and its built-in GPS navigation functions guide you from one tour stop to next. The app works offline, so no data plan is needed when traveling abroad.

Midhat Basha Bazaar, established in 1732, is the oldest and one of the most prominent souqs in Damascus. It offers a wide range of vendors selling fine textiles, beautiful clothes, sweets, spices and many other goods.
Image by krebsmaus07 on Wikimedia under Creative Commons License.
2

Khan az-Zeit, located on the Street Called Straight in western Damascus, is an old house that is an excellent example of Damascene architecture and Syrian culture.
Image by Jerzy Strzelecki on Wikimedia under Creative Commons License.
3

The beautiful Sebahiya Mosque, located near the western border of Old Damascus, is an excellent example of local architecture. This popular place of worship boasts a graceful and gorgeous minaret.
Image by garrigou on Wikimedia under Creative Commons License.
4

Babel Jaabiyah is one of seven outstanding ancient city gates in Damascus. It was named this because inhabitants of the Jabiya village used to pass through it. Located on the west side of the city, its design is similar to the Eastern Gate.
Image by Eiffel on Wikimedia under Creative Commons License.
5

The Sinan Pasha Mosque is an early Ottoman-era mosque in Damascus, located along Suq Sinaniyya Street. The mosque was built in 1590 by Sinan Pasha, the Ottoman-appointed governor of Damascus from 1589 to 1593. It stands on the site of an older mosque called the Mosque of Basal to the southwest of the walled city. The donor, Sinan Pasha, also served as the governor of Cairo and as the grand vizier to the sultan, and is known for his role in the Ottoman conquest of Yemen.

The Sinan Pasha Mosque is built with an alternating course of black and white stone. In addition to the mosque itself is a madrasa an ablution fountain. The arched entrance of the western mosque portal is topped by a glazed tile panel composed of floral motifs above the marble panel with Arabic inscriptions anchored by square mosaic panels on both sides. The circular, green-enameled brick minaret rises above the southern pier of the portal, carried on a circular stone base of black and white stone. Its single balcony is supported by three rows of muqarnas and is protected by a carved stone balustrade below wooden eaves. The minaret ends at a pointed conical crown.

Image by Zishan Sheikh on Flickr under Creative Commons License.
Sight description based on wikipedia
6

Damascus contains a large number of traditional Syrian houses. This house is the former residence of the Sheikh Saadi Alqtapi family and was later converted into the Damascus Chamber of Commerce. Today, it is used as a store.
Image by kdunham on Flickr under Creative Commons License.
7

Bab el Saghir, the largest Muslim cemetery in Damascus, is located on Bāb Saghīr Street. It houses the graves of many prominent Syrian figures and noble families.
Image by alazaat on Flickr under Creative Commons License.