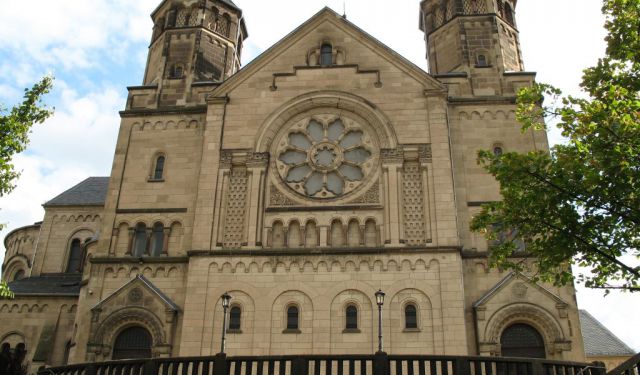 Image by Túrelio on Wikimedia under Creative Commons License.

The southeastern district houses many excellent attractions. Here you will find old Gothic churches, the historic Frankenberg Castle, cozy café and amazing zoo. Follow the next walking tour to discover this city’s area.
How it works: Download the app "GPSmyCity: Walks in 1K+ Cities" from iTunes App Store or Google Play to your mobile phone or tablet. The app turns your mobile device into a personal tour guide and its built-in GPS navigation functions guide you from one tour stop to next. The app works offline, so no data plan is needed when traveling abroad.

The Lady Chapel or Marienkapelle is located in the southern neighbourhood of Aachen, next to former St. Joseph church. The original chapel was founded in 1644, while the present building dates back to 1903. Inside the chapel you will find a statue of the Virgin Mary.
Image by Túrelio on Wikimedia under Creative Commons License.
2

St. Johann Church is situated in the southern district of Aachen, near St. Michael Church. It is a Catholic Church and former abbey church. Founded at the beginning of the 19th century, the church was expanded by architect Hermann Joseph Hurth in 1881 because of the growing baptistery. The church was damaged during the Second World War. The 1942 bomb attack destroyed all windows. When the war ended, the church was reconstructed. In 1951, bishop Dr. Friedrich Hünermann consecrated the new altar. This religious site is remarkable for its almost 300-year long history and the treasury department, which displays numerous religious relics and objects.
Image by Lonius2 on Wikimedia under Creative Commons License.
3

St. Michael Church is another remarkable church, located in the southern district. The church was first mentioned in 1252. This Romanesque religious building houses a massive tower with fine statues and a Neo-baroque door in the western part of the façade. The expansion of the church took place between 1891 and 1900, and was led by architect Peter Aachen. During the Second World War, the church was seriously damaged. After reconstruction, on November 13, 1949, the religious services resumed. In 1985, the church's interior was renovated.
Image by Túrelio on Wikimedia under Creative Commons License.
4

Café M is a nice café, located on Dammstraße. The place is noted for its cozy, coffee house atmosphere, breakfast till late afternoon, and a children's play area and pleasant rooms, where one can enjoy a cup of coffee or tea with delicious home-made cakes. The café is closed on Mondays.
Image by Ahmed Rabea on Wikimedia under Creative Commons License.
5

Trinity Church or Dreifaltigkeitskirche is another sacred place in Aachen, located on the corner of Zollernstraße and Duke Street, in the southeastern part of the city. The church was founded by architect Heinrich Reinhardt in 1899. Above the main entrance you will see the high tower with a gabled roof. After the bomb attack in the Second World War, only the tower and the surrounding wall remained standing. The Trinity Church was restored by architect Leo von Schwartzenberg Baldwin after 1954-1955.
Image by Norbert Schnitzler on Wikimedia under Creative Commons License.
6

Frankenberg Castle is a prominent landmark of Aachen, located in a peaceful southern neighbourhood. This Medieval castle was built in stone blocks and brick and dates back to the 13th century. It was first mentioned in 1352. During its long history, the castle was home to many prominent Aachen leaders and noble families. At the beginning of the 20th Century, the castle became a residence and workshop for the famous engineer and aircraft designer Hugo Junkers. Now it is home to an Aachen History Museum, where you will find a rich collection of craft items, coins, frescoes, etc.
Image by Sir Gawain on Wikimedia under Creative Commons License.
7

The Sacred Heart Church or Herz Jesu Kirche is a Roman Catholic Church situated on Viktoriaallee Street, not far from the Frankenberg Castle. Dedicated to Sacred Heart of Jesus, this religious building was constructed in Gothic style and houses fine towers.
Image by Túrelio on Wikimedia under Creative Commons License.
8

Aachen’s “Euregiozoo”, otherwise known as Aachener Tierpark, is a great attraction for everybody. It was founded in 1966 and occupies 8.9 acres. The main entrance is in the Upper Drimbornstraße. The zoo is home to about 1,000 animals, exotic birds and insects. Here you will also find a Roman sarcophagus of 1793, founded at the house Palant in Weisweiler.
Image by --S on Wikimedia under Creative Commons License.

Aachen is an old historic city where you will find a wide number of old churches. Dating back from Medieval times to the 20th century, these sacred places are valuable from historical, architectural and cultural points of view. This self-guided tour will lead you through the most prominent religious sights in the city.