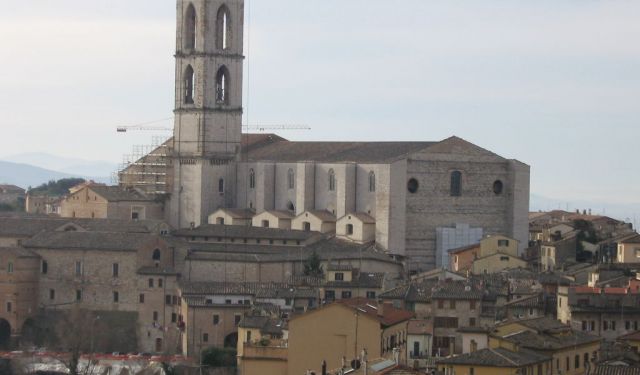 Image by Veruom on Wikimedia under Creative Commons License.

South Perugia is home to several outstanding religious buildings, including Basilica San Domenico, Basilica di San Pietro and San Costanzo Church. This area also houses beautiful squares, arches and the Medieval Gardens. Take the following tour to discover Perugia’s south side.
How it works: Download the app "GPSmyCity: Walks in 1K+ Cities" from iTunes App Store or Google Play to your mobile phone or tablet. The app turns your mobile device into a personal tour guide and its built-in GPS navigation functions guide you from one tour stop to next. The app works offline, so no data plan is needed when traveling abroad.

Rocca Paolina, an impressive fortress designed by Antonio da Sangallo the Younger, was built between 1540 and 1543 by Pope Paul III, and until 1860 was a symbol of papal power. This complex structure housed soldiers, animals, armories and warehouses and was dominated by the Palace of the Pope. Partly destroyed in 1848 and rebuilt in 1860 by Pope Pius IX, the fortress was destroyed that year after the city’s annexation to the Kingdom of Italy. Today, only the walls along Viale Indipendenza and Via Marizia remain. To see Perugia's Underground City and last remains of the glorious Rocca Paolina, just take an escalator from Piazza Partigiani. A museum displaying artifacts, documents and other valuable exhibits can also be found here.
Image by BestKevin on Wikimedia under Creative Commons License.
2

Piazza Garibaldi is a small city square located near Piazza Partigiani. In the center of the square you will see a monument dedicated to Giuseppe Garibaldi, a well-known military and political figure who is considered an Italian national hero.
Image by Travpeter on Wikimedia under Creative Commons License.
3

3) Basilica of San Domenico (must see)

The Basilica of San Domenico, located on Piazza Giordano Bruno, dates back to the 14th century. It is the largest religious building in Umbria, designed by Giovanni Pisano. Its interior was restored by Carlo Maderno. The church is home to Umbrian art works, the tomb of Pope Benedict XI (preserved from the 14th century) and a 15th century wooden choir. Beside the basilica you will see a tower, built between 1464 and 1500 by Lombard Gasperino Antonio. Originally the tower was 126 yards tall, which was reduced to 100 feet in 1546 for added stability.
Image by Francesco Gasparetti on Wikimedia under Creative Commons License.
4

This elegant pink and white building dating back to 1333 is Perugia’s best-preserved medieval hospice. Founded by Confraternita di San Domenico as a place where pilgrims could stop for free bread and wine during their visit to Perugia, the hospice operated until the late 19th century and is now home to a carpenter’s workshop.
Image by shaire productions on Flickr under Creative Commons License.
5

Porta San Pietro, or Porta Romana, is a triple-arched medieval gate that once consisted of two separate gateways. Built into the walls during the 13th and 14th centuries, its exterior was designed by Agostino di Duccio and Polidoro Stefano. The internal arc is surmounted by a niche containing an 1817 painting depicting the Madonna of the Rosary with Saints Dominic and Francis.
Image by Francesco Gasparetti on Wikimedia under Creative Commons License.
6

Basilica di San Pietro, a Catholic church and abbey, contains one of the most significant art collections in Perugia, grey marble columns, a richly-colored coffered wooden ceiling, a wood-paneled choir and other unique 14th and 15th century adornments. On the sides of the 15th gateway you can see the remains of the original facade.
Image by Giovanni Dall'Orto on Wikimedia under Creative Commons License.
7

The Medieval Gardens can be found near the Benedictine Monastery of San Pietro. Designed by Alessandro Menghini, this typical medieval monastic garden symbolizes the Garden of Eden and contains such important elements as part of an old Etruscan-Roman road, a city gate and the ruins of a 16th century building erected by the Benedictines.
Image by Grifomaniacs on Wikimedia under Creative Commons License.
8

Chiesa di San Costanzo, located on Via San Costanzo, is dedicated to Saint Costanzo, the first bishop of Perugia. Built in the 12th century, the church was completely restored in 1890. It features a beautiful Romanesque doorway and a 12th century altar.
Image by Lumen roma on Wikimedia under Creative Commons License.