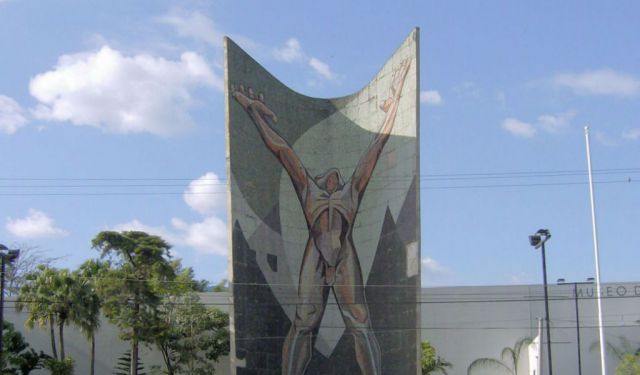 Image by Xtremesv on Wikimedia under Creative Commons License.

The west part of San Salvador has attractions that draw tourists seeking to better understand the city's culture. Take this tour to discover some of the best-known monuments and buildings in the city's southwest area.
How it works: Download the app "GPSmyCity: Walks in 1K+ Cities" from iTunes App Store or Google Play to your mobile phone or tablet. The app turns your mobile device into a personal tour guide and its built-in GPS navigation functions guide you from one tour stop to next. The app works offline, so no data plan is needed when traveling abroad.

Teatro Presidente is one of the most captivating cultural complexes in the city, due to the number of monuments and busts of different figures from the country's history, both in the arts and in other areas. Some of these people were a vital part of the history of the country's formation. There are organized performances on different occasions in which a great number of celebrities participate. This theatre is an important place for the entire Salvadorian cultural scene.
Image by Carlos Rodriguez Mata on Flickr under Creative Commons License.
2

Monumento a la Revolucion is located at the entrance of the Museum of Art of El Salvador. It is dedicated to one of the country's central events: the revolution that began in 1948 and culminated in the Constitution in 1950. The monument was erected for the president Lieutenant Colonel Oscar Osorio, who worked in the period between 1950 and 1956. The monument was handmade by a group of artists but the monument was designed by Violet and Claudio Cevallos, who decided on an image of a nude man looking to the sky with extended hands. Locals call this monument "naked man."
Image by Xtremesv on Wikimedia under Creative Commons License.
3

Construction work on the original official residence began place in 1911. On May 9, 1912,the Legislative Assembly the construction of several buildings, including one destined to be "The Normal School for Teachers" which would later become the presidential house. After the death of President Araujo, President Meléndez modified the original plan for the "Normal School for Teachers" and decided to make it "The Normal School for Boys". It was finished in 1921, but started functioning in 1924. In 1931, the new president Hernández Martinez decided to move the offices of the presidential house to the building that occupied the Normal School for Boys in the San Jacinto neighbourhood, close to the “El Zapote” barracks. Every president who governed from this mansion has tried to give it a personal touch such as remodeling the building, changing the carpets or the wallpaper, or acquiring an art object to add to the collection.

Image by Stelita on Wikimedia under Creative Commons License.
Sight description based on wikipedia
4

Torre Cuscatlán is one of the tallest buildings in San Salvador. Finished in 1989, it is 74 meters high and has 18 floors. Ricardo Jiménez Castillo, who is considered one of the most representative architects of El Salvador, was in charge of the building's design.

It is influenced by modern style, using a complete glass cladding for the exterior. The main characteristic of its design are the 3 setbacks covered with plants that run along the height of the building. The materials used to construct the tower were aluminum, reinforced concrete and glass. Some people believe that the tower was inspired by Willis Tower in Chicago, United States, but there is no data to confirm this.

The building was the tallest one of the country, despite a new high-end apartment and penthouse complex under construction in the northern section of San Salvador, 105 Torres Campestre, which was constructed in 2008 and is 73.25 meters high. However, the Torre Cuscatlán has lost its title to Multiplaza Apartamentos, two luxury condominium towers, which are 110 meters tall.

Image by Carlos Rodriguez Mata on Flickr under Creative Commons License.
Sight description based on wikipedia
5

Iglesia de Los Santos de Los Últimos Días is a church founded by Joseph Smith, who had a special earthly mission: that of restoring the church of Jesus. This church is a symbol of growth because after its construction, many other churches and temples were constructed for the sacred rituals of the Church. All these religious buildings teach followers to respect and follow God’s wishes.
Image by Dugfresh on Flickr under Creative Commons License.
6

Centro Monseñor Romero is the site of the murder of Monseñor Oscar Arnulfo Romero, an important figure in the religion system in San Salvador. He was an Archbishop of San Salvador in 1977 and was considered one of the country's most important and progressive religious leaders. He criticized the country's government for its injustice and repressions. He also criticized Pope John Paul II for his support of the El Salvador military. This center tells the story of his assassination along with the assassination of other six Jesuit priests who were murdered in the university rectory, along with information about El Salvador's civil war. There are photos presented along with articles from local and international newspapers about the events.
Image by Carlos Rodriguez Mata on Flickr under Creative Commons License.
7

Monumento Indio Atlacatl is dedicated to a leader who led the Indian armies against Spanish invasion of the country. It is a statue of 2.20 meters made from bronze, and it has the face of Valentin Estrada, its creator. It symbolizes the power and the strength of people that fought during that period. It was for a long period of time placed on Independence Street, then it was moved to Parque Antiguo Cuscatlan. It is a beautiful piece of art that tells an important chapter of the country’s formation.
Image by Walkyman on Flickr under Creative Commons License.
8

At Cafe Arco-Jardin, you can enjoy a walk in the heart of nature where feelings of beauty and peace dominate. It is a café offering a large menu of delicious sweets, cocktails, hot chocolate, mini pizzas, and salads. It is open from Monday through Friday from 10:00 a.m. to 7:00 pm, and on weekends from 7:30 a.m. to 9:00 pm. All the tables are surrounded by plants arranged and decorated with different pieces of ceramic art. There are small gardens full of different species of flowers and trees, and tables are arranged among them, helping the café's customers feel as if they are in the middle of nature.
Image by jankie on Flickr under Creative Commons License.
9

Jardin Botanico La Laguna is a beautiful park spread over three hectares of land. It gathers together a great collection of plants and flowers from around the world. It is located in a volcanic crater which attracts public attention in a unique way. Plants are arranged according to types as medical plants, desert plants, family plants, ferns, orchids, home gardens, wooded area of plants and many others. There are also collections of plants organized and labeled by family, common, scientific and distribution. It has an open air cafeteria where everyone can spend some time admiring nature and drinking something and relaxing in the same time.
Image by Carlos Rodriguez Mata on Flickr under Creative Commons License.