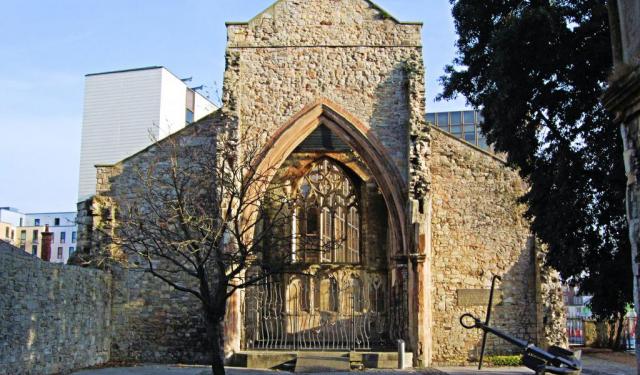 Southampton contains many great houses of worship. It is home to a number of beautiful churches, rich in history and heritage, that are worth visiting. Discover the beauty of England’s religious landmarks, starting with St. Joseph's Church, in the following tour.
How it works: Download the app "GPSmyCity: Walks in 1K+ Cities" from iTunes App Store or Google Play to your mobile phone or tablet. The app turns your mobile device into a personal tour guide and its built-in GPS navigation functions guide you from one tour stop to next. The app works offline, so no data plan is needed when traveling abroad.

St. Joseph's Catholic Church, founded in 1800, is a great place to learn more about the city’s maritime history, as it once served as shelter for sailors. The well-known Stella Maris club once ran this church for sailors and their families. The church itself is very beautiful and has an interesting design, including a wonderful altar, a beautiful frame and windows, and a curved Gothic ceiling.
Image by mrbill on Flickr under Creative Commons License.
2

St. Michael's Church is the oldest building still in use in the city of Southampton, and is the only church still active of the five originally in the medieval walled town. The church is a Grade I Listed building.

Archaeological evidence has dated the foundation of the church at 1070 and the church was dedicated to St. Michael, patron saint of Normandy. The original church was built on a cruciform plan. The first documentary evidence of the existence of St. Michael's was in 1160 when Henry II granted the Chapels of St. Michael, Holyrood, St. Lawrence and All Saints to the monks of St. Denys, who retained the patronage until the Dissolution in 1537 when St. Michael's passed to the Crown.

The most famous tomb in the church is that of Sir Richard Lyster. Lyster was Chief Baron and later Lord Chief Justice of the Common pleas. His tomb was erected in 1567. The tomb is situated in the north-east corner of the church and is a delightful early-Elizabethan example of the use of fluted columns and other classical details. By the north-east corner of the tower is part of a 12th century gravestone, with a carving of a Bishop in mass vestments, holding a crozier. High on the south wall is a memorial to Bennet Langton, with Samuel Johnson's epitaph to his close friend.

Image by Alexander P Kapp on Wikimedia under Creative Commons License.
Sight description based on wikipedia
3

Holyrood Church (or Holy Rood Church) was one of the original five churches serving the old walled town of Southampton. Built in 1320, the church was destroyed by enemy bombing during the blitz in November 1940. In 1957 the shell of the church was dedicated as a memorial to the sailors of the Merchant Navy.

The first documentary evidence of the existence of Holyrood was in 1160 when Henry II granted the Chapels of St. Michael, Holyrood, St. Lawrence and All Saints' to the monks of St. Denys. The name of the church, "Holy Rood", indicates its Saxon origins.

Following the destruction of the church during the blitz, the only parts of the church still standing are the tower at the south-western corner and the chancel at the eastern end, together with large parts of the north walls. The wooden spire was lost as was the great west window, whilst the central area of the church was completely destroyed. On the west face of the tower there is a memorial plaque to Charles Dibdin (1745–1814) described as a "native of Southampton, poet, dramatist and composer, author of Tom Bowling, Poor Jack and other sea songs". Above the plaque are the clock and church bells, which feature pre-1760 Quarter jacks, small figures that strike the quarters of each hour.

St. Nicholas Greek Orthodox Church, established in 1964 through the gifts and work of its community, was inaugurated on December 6, 1970. Above the entrance of this red brick church you will find a large tall window with a white cross set above it. On the west side of the church is a high tower with a long narrow window near the top.
Image by guldfisken on Flickr under Creative Commons License.
5

St. Mary's Church, Southampton’s largest church, traces its origins to the first Saxon settlements of the 7th century. Through its main entrance on the west, you can see straight to the chancel and the high altar, with the nave altar and chancel steps in between. To the left is an archway leading to the small baptistery, the oldest part of the church, which mostly survived the bombing of 1940. It's currently used for small services and private prayer. The large nave, with two aisles, is also used for art exhibitions. The nave altar, with steps leading to the chancel, contain the choir stalls and the organ console above them on the left, with most of the pipes on the right.
Image by GaryReggae on Wikimedia under Creative Commons License.
Sight description based on wikipedia
6

The Central Baptist Church was founded during the Edwardian expansion. A wooden structure design, this Gothic church is more about its people, than the building itself. People come here to worship, offering women's group Bible study, prayer meetings and other community events.
Image by NYC Wanderer on Flickr under Creative Commons License.
7

Founded in 1889, built of red brick and stone, the east side of the building has a large rose window, an arch doorway and large columns. The two large windows on the north side and Lady Chapel are exquisitely designed, as well as the high narrow arcade.
Image by David Mainwood on Wikimedia under Creative Commons License.
8

St Andrew's, a United Reformed Church, is a Grade II listed building. Founded in 1662 under the ministry of Reverend Nathaniel Robinson, hymn writer Isaac Watts was a deacon of this church. Having outgrown the original chapel, a new building was erected on the site in 1727. Demolished in 1819 and replaced by an even larger building, the first stone was laid on April 1, 1819 and completed on April 20, 1820. Since the decision to combine St. Andrew's and Avenue congregations, the church has become known as Avenue St. Andrew's.
Image by Colin Smith on Wikimedia under Creative Commons License.
Sight description based on wikipedia

History and Art Tour in Southampton