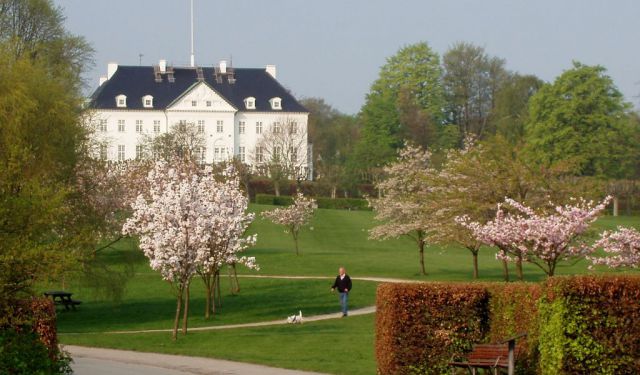 Image by Nils Jepsen on Wikimedia under Creative Commons License.

Southern Aarhus offers great opportunities for sightseeing. You can see the summer residence of the Danish Royal family, the magnificent Marselisborg Palace, the charming Memorial Park and many other attractions. Discover the beautiful sites of southern Aarhus in the following tour.
How it works: Download the app "GPSmyCity: Walks in 1K+ Cities" from iTunes App Store or Google Play to your mobile phone or tablet. The app turns your mobile device into a personal tour guide and its built-in GPS navigation functions guide you from one tour stop to next. The app works offline, so no data plan is needed when traveling abroad.

Varna Palace, built in 1909, was designed by architect Eggert Aachen. It is located in the magnificent Marselisborg forest. Recently renovated by the new owners, it has a charming yellow interior. Nowadays it is used for meetings, conferences and other events.
Image by Nils Jepsen on Wikimedia under Creative Commons License.
2

Memorial Monument, located in Memorial Park, pays tribute to all the Danes who were killed in World War I. It contains the names of 4,140 Danish soldiers and also features a large circle with sculptures of guns and soldiers on its walls.
Image by Sten Porse on Wikimedia under Creative Commons License.
3

Memorial Park, located in front of Marseliborg Palace, is a 32 acre park planned by architect L. Christian Diedrichsen. It offers trees, small ponds, interesting sculptures, a rose and herb garden and much more. People like to come here for picnics and other recreational activities.
Image by Nils Jepsen on Wikimedia under Creative Commons License.
4

Marselisborg Palace is a residence of the Danish Royal Family, serving as the summer home of Queen Margrethe II since 1967. Historically, the 18th century country house was the property of the Marselis family, originally of Hamburg, from where it gets its name. Marselisborg became a royal residence when Crown Prince Christian and his consort Princess Alexandrine received it as a wedding gift in 1898. It was rebuilt by Danish architect Hack Kampmann. Currently, the palace is used during the summer, as well as during the Easter and Christmas holidays.
Image by Pred on Wikimedia under Creative Commons License.
Sight description based on wikipedia
5

Donbækhusene, two small houses located near Marselisborg Palace, were built in 1828 and 1850. They served as quarters for servants of Marselisborg Palace. Later, they were used as housing for forest workers. The houses burned in 1996 and rebuilt by the Municipality of Aarhus in their original style.
Image by Nils Jepsen on Wikimedia under Creative Commons License.
6

Ole Rømer Observatory, an astronomical observatory designed by Danish architect Anton Rosen, was built in 1911 at the request of German astronomer Friedrich Krüger. Nowadays it is used for research and observation by the University of Aarhus. Open 15 nights a month from September through April, it offers astronomical presentations to visitors. It is a great example of Danish Art Nouveau design.
Image by Nils Jepsen on Wikimedia under Creative Commons License.
7

Fredenskirken, erected between 1958 and 1960, is located on Rosenvangs Alle. It was designed by architects F. Nichalsen and Aksel Skov. This church features a chapel and a bell tower. Worship services are held on Sundays and everyone is welcome to attend.
Image by Richard W.M. Jones on Wikimedia under Creative Commons License.
8

Viby Kirke, built in the late 1100s, is located on Grundtvigsvej. This village church contains a Romanesque apse, chancel and nave. Worship services are held each Sunday, with coffee on the church porch afterwards.
Image by Nils Jepsen on Wikimedia under Creative Commons License.

Aarhus churches provide a good insight into Denmark’s cultural and religious heritage. This tour reveals Danish churches of various architectural styles, all charming in their own way. The two major historical churches in Aarhus are Aarhus Cathedral and the Church of Our Lady. Don’t miss the opportunity to check out the magnificent churches Aarhus has to offer.