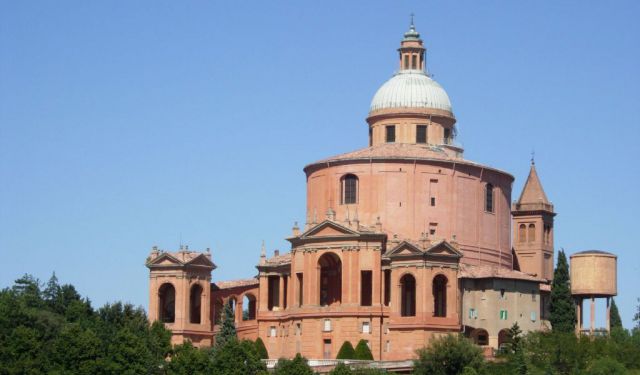 Image by Michelangelo Bucci on Wikimedia under Creative Commons License.

Southern Bologna boasts many great attractions, such as the Sanctuary of the Madonna of Saint Luca, museums and palaces with magnificent architecture. Take this self-guided tour and explore the most interesting sites in the south of Bologna.
How it works: Download the app "GPSmyCity: Walks in 1K+ Cities" from iTunes App Store or Google Play to your mobile phone or tablet. The app turns your mobile device into a personal tour guide and its built-in GPS navigation functions guide you from one tour stop to next. The app works offline, so no data plan is needed when traveling abroad.

1) Sanctuary of the Madonna of Saint Luca (must see)

The Sanctuary of the Madonna of San Luca is a basilica church in Bologna, sited atop Colle or Monte della Guardia, in a forested hill some 300 metres above the plain, just south-west of the historical centre of the city. While a road now leads up to the sanctuary, it is also possible to reach it by traversing a long (3.5 km) monumental roofed arcade (Portico di San Luca) consisting of 666 arches, which was built in 1674-1793. It was meant to protect the icon as it was paraded up the hill. A yearly procession proceed from the Cathedral of San Pietro in the centre of Bologna to the Sanctuary along this path.

Originally the arches held icons or chapels erected by the patron family. The Sanctuary was meant to house a miraculous icon of the virgin. A church or chapel existed atop the hill for about a thousand years. The present church was constructed in 1723 using designs of Carlo Francesco Dotti. The lateral external tribunes were built by Carlo Francesco's son Giovanni Giacomo using his father's plans. The centrally planned sanctuary has painted artworks by Domenico Pestrini, Donato Creti; Guido Reni, Giuseppe Mazza in chapel of St. Anthony of Padua, Vittorio Bigari, and Guercino. Stucco works are by A. Borelli and G. Calegari and statues by A. Piò.

Image by Hay Kranen on Wikimedia under Creative Commons License.
Sight description based on wikipedia
2

Carlo Francesco Dotti built Arco del Meloncello in 1732 to connect Saragozza Street with the porticoes on the road to the Church of Saint Luca. This beautiful arch was designed in the Baroque style.
Image by Pietro Poppi on Wikimedia under Creative Commons License.
3

The Bologna Museum of Modern Art exhibits part of its collection at Villa delle Rose, which dates back to the 19th century. Its main feature is a ceiling fresco depicting women, a man on horseback and angels.
Image by unforth on Flickr under Creative Commons License.
4

4) Museum of the Historical Tapestry

The Museum of the Historical Tapestry is a unique museum that displays the artistic heritage of tapestry. The museum also exhibits Italian, Middle Eastern, Far Eastern and other European fabrics, as well as beautiful embroideries, vestments and old tools used to create these things.

Image by unforth on Flickr under Creative Commons License.
5

Porta Saragozza is an historical gate in the city wall that surrounded Bologna’s Old Town. This impressive and spectacular monument attracts many tourists. It differs from other gates by the decorated walls enclosing it. The Museum of the Blessed Virgin of Saint Luke is housed within the gateway.
Image by Michele Ursino on Wikimedia under Creative Commons License.
6

The Collegio di Spagna (or Royal Spanish College) is a college for Spanish students at the University of Bologna which has been functioning since the 14th century. Its full original name in English translation was the College of Saint Clement of the Spaniards. It has been under the Royal patronage of the Spanish Crown since 1488, as authorized by Pope Innocent VIII.

The college was founded in 1364 by the Cardinal Gil Alvarez De Albornoz (1310–1367) and built in 1365–1367. It consists of a building in two floors with arcades surrounding a courtyard. The exterior has later been partly remodelled in renaissance style. The architecture of the Collegio is peculiarly Italian in the use of the loggia, but shares a characteristic of medieval college buildings in England and France, in being arranged around a central rectangular court. Bas reliefs of the coat of arms of Spain are located above the two main entryways.

Image by Biopresto on Wikimedia under Creative Commons License.
Sight description based on wikipedia
7

Bevilacqua Palace, built in 1482, is one of Bologna’s most beautiful palaces. It has a magnificent gateway, narrow courtyards, many sculptures and small galleries with paintings by great artists.
Image by Sien on Wikimedia under Creative Commons License.