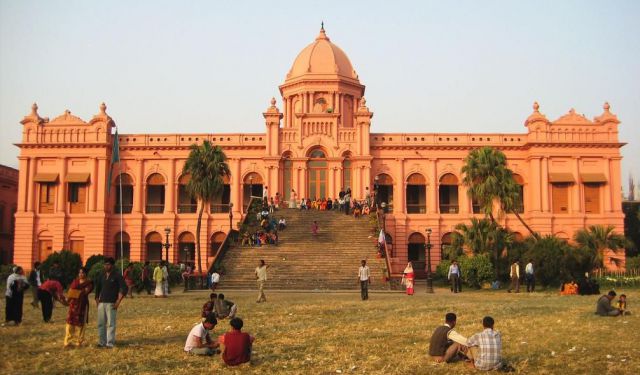 Image by Russell John on Wikimedia under Creative Commons License.

Southern Dhaka has several great attractions for visiting. The Lalbagh Fort has many interesting spots to discover. A popular attraction is Ahsan Mazil, a beautiful pink palace on the banks of the Buriganga River. The world-famous Chawk Bazar offers much to see and taste. Take this tour to discover the magnificent cultural, historic, religious and architectural spots of southern Dhaka.
How it works: Download the app "GPSmyCity: Walks in 1K+ Cities" from iTunes App Store or Google Play to your mobile phone or tablet. The app turns your mobile device into a personal tour guide and its built-in GPS navigation functions guide you from one tour stop to next. The app works offline, so no data plan is needed when traveling abroad.

Lalbagh Fort (also known as "Fort Aurangabad") is an incomplete Mughal palace fortress at the Buriganga River in the southwestern part of Dhaka. Construction was commenced in 1678 by Prince Muhammad Azam during his 15-month long vice-royalty of Bengal, but before the work could complete, he was recalled by Aurangzeb. His successor, Shaista Khan, did not complete the work, though he stayed in Dhaka up to 1688. His daughter Iran Dukht nicknamed Pari Bibi (Fairy Lady) died here in 1684 and this led him to consider the fort to be ominous.

Lalbagh Fort is also the witness of the revolt of the native soldiers against the British during the Great Rebellion of 1857. As in the Red Fort in India, they were defeated by the force led by the East India Company. They and the soldiers who fled from Meerat were hanged to death at the Victoria Park. In 1858 the declaration of Queen Victoria of taking over the administrative control of India from the Company was read out at the Victoria park, latter renamed Bahadur Shah Park after the name of the last Mughal Emperor who led that greatest rebellion against then British empire.

Image by Sfaisal2005 on Wikimedia under Creative Commons License.
Sight description based on wikipedia
2

The Mosque is located in proximity to the southeastern gateway of the Lalbagh Fort in Dhaka. It is the biggest Mughal mosque in Bangladesh with space for 1500 people. The mosque was erected by Prince Farrukh Siyar between 1703 and 1706. Of course, modifications have been made since then. A minaret was added during the Pakistani period. The mosque has a modern look now, and each side has an impressive octagonal tower. It is the only mosque in Bangladesh that displays a three-aisled deep prayer chamber.
Image by Cezary Piwowarski on Wikimedia under Creative Commons License.
3

Water Works at Chandnighat were established with the financial support of Nawab Khawaja Abdul Ghani in 1874. It was the first plant to supply the city with potable water. In 1878, the city began receiving the first processed, filtrated water from Buriganga River. After some improvements, the plant now provides 1.8% of the city's potable water. Because a good deal of toxic liquid waste is thrown into the river, its water is very difficult to process to make it good enough for human consumption. That is why 82% of potable water of Dhaka is drawn from underground sources.
Image by Derek Jensen on Wikimedia under Creative Commons License.
4

The Churihatta Mosque is placed between the Water Works at Chandnighat and The Chawk Mosque in Dhaka. A Persian inscription says that the mosque was erected by Muhammad Beg in 1650 during the rule of Shah Shuja. The mosque has been renovated and modified since that time, so it looks much like a modern building now. It is completely covered with a chau-chala vault which is why it serves as an example of Bungalow building type from the Mughal period. Don’t miss the opportunity to discover this historic spot.
Image by mmechtley on Flickr under Creative Commons License.
5

The Chawk Mosque in Dhaka is located in the Chowk Bazaar area of the old town of Dhaka, south of the current city centre. It was originally built mostly likely during the rule of the Mughals in the 17th century and may be the earliest dated mosque in Bengal built on a high vaulted foundation. Today the original building design has been lost through multiple renovations and extensions. The original roof with three domed mosques has been demolished.

Its construction has been dated to 1676, as noted by an inscription in the Persian language over a doorway. The inscription attributes the project to Subahdar Shaista Khan.

Image by Ragib Hasan on Wikimedia under Creative Commons License.
Sight description based on wikipedia
6

Chawk Bazaar is a well known bazaar in Lalbagh, Old Dhaka. It dates back to the Mughal period. Chowk Bazaar was one of the most famous business and social meeting centers of Dhaka in the Mughal period. Even after 400 years it is still famous as before. It is one of Dhaka's old town market and it formed in the place where other old markets once were. King Maan Singh protested for the country on behalf of Mugal kingdom. In 1602 he transferred the head office in Bawal to the present Central Prison and also the Mughal Durgo, that’s how Chowk Bazaar formed.

It is a very good place for shopping as variety of goods is available and they are sold at the cheapest rates. Moulavi Bazaar is well known spice shop. During Ramadan Chowk Bazaar is famous for its Iftar items which include Moglai and other traditional items.It is a very crowded place and the roads are mostly jam-packed.

Image by dungodung on Flickr under Creative Commons License.
Sight description based on wikipedia
7

7) Armenian Church and Graveyard (must see)

The Armenian Church is a historically significant architectural monument situated in the Armanitola area of old Dhaka. The church bears testimony to the former existence of a significant Armenian community in the region. In 1781 the now-famous Armnenian Church was built on Armenian St in Armanitola, a once thriving business area. The site was an Armenian graveyard before the church was built and the tombstone area that continues to exist serves as a chronicle for the history of Armenians in the area. Agaminus Catachik, an Armenian, gave away the land to build the church and it has been alleged that "Michel Cerkess, Okotavata Setoor Sevorg, Aga Amnius and Merkers Poges helped to build the church."

Over fifty years following the construction of the Armenian Church, a clock tower was built on the western side of the structure. A rumour subsequently circulated regarding the clock, stating that the clock sounded four miles away and that people sychronised their watches in accordance with the sound of the tower's bell. In 1880 the clock stopped and the tower was destroyed in 1897 as the result of an earthquake. In the old Armenian graveyard, amongst the 350 people buried there, the grave of Armenian Catachik Avatik Thomas continues to be adorned with a statue of his wife. The statue was bought for this specific purpose from Kolkata and the grave was inscribed with the words "Best Of Husband".
Image by naquib on Flickr under Creative Commons License.
Sight description based on wikipedia
8

Ahsan Manzil was the official residential palace and seat of the Dhaka Nawab Family. This magnificent building is situated at Kumartoli along the banks of the Buriganga River in Bangladesh. The construction of this palace was started in the year 1859 and was completed in 1869. It is constructed in the Indo-Saracenic Revival architecture. To preserve the cultural and history of the area, the palace became the Bangladesh National Museum on 20 September 1992.

Ahsan Manzil is one of the most significant architectural monuments of Bangladesh. The building structure was established on a raised platform of 1 meter, the two-storied palace measures 125.4m by 28.75m. The height of the ground floor is 5 meters and the height of the first floor 5.8 meters. The thickness of the walls of the palace is about 0.78 meters. There are porticos of 5 meters height on the northern and southern sides of the palace. The building has a broad front-facing the Buriganga River. On the river side, an open spacious stairway leads right up to the second portal and on their stands the grand triple- arched portals. There was once a fountain in the garden in front of the stairs which does not exist today. All along the north and the south side of the building run spacious verandahs with an open terrace projected in the middle.
Image by Adnandx on Wikimedia under Creative Commons License.
Sight description based on wikipedia