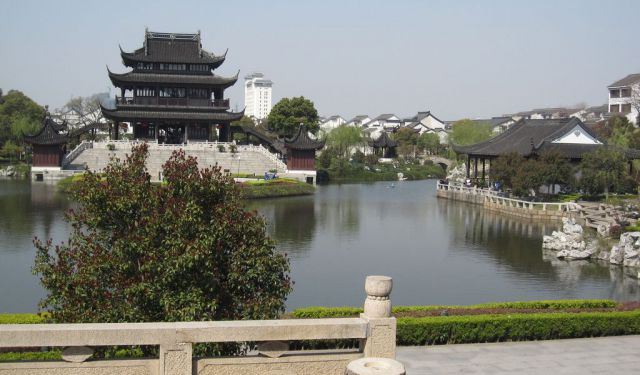 Image by Ines Yeh on Flickr under Creative Commons License.

The southern region of Suzhou is home to a number of historic attractions and prominent city landmarks. Here you will find the famous Grand Chanel, Pan Gate, Ruiguang Pagoda, Wu Gate Bridge, Great Wave Pavilion, Confucian Temple and Master of the Nets Garden.
How it works: Download the app "GPSmyCity: Walks in 1K+ Cities" from iTunes App Store or Google Play to your mobile phone or tablet. The app turns your mobile device into a personal tour guide and its built-in GPS navigation functions guide you from one tour stop to next. The app works offline, so no data plan is needed when traveling abroad.

Wu Gate Bridge is situated on Grand Canal beside Pan Gate. Wu Gate Bridge is the highest bridge in Suzhou and now the second oldest structure of its kind in the region. The bridge was named so because it was the gateway to the Wu state.
Image by oinonio on Flickr under Creative Commons License.
2

Pan Gate, Pan Men, Panmen or Panmen Gate is a famous historical landmark in Suzhou. It is located on the south-west corner of the Main Canal or encircling canal of Suzhou. Originally built during the Warring States Period in the state of Wu, historians estimate it to be around 2,500 years old. It is now part of the Pan Gate Scenic Area. Pan Gate is part of the ancient city wall built in 514 B.C. that surrounded and protected Suzhou. Pan Gate was the only entrance to the wall that surrounded ancient Suzhou. It is also known in China for its architecture. It is so famous for its complex of both land and water city gates that many times, people directly refer to it as the "Land and Water Gate". In order to attract more tourists, in recent years, the city of Suzhou has renovated the old wall and built many other attractions around the original gate in the Pan Gate Scenic Area. The present Pan Gate was built in the 11th year of the reign of Zhizheng in the end of the Yuan Dynasty.
Image by chenines on Flickr under Creative Commons License.
Sight description based on wikipedia
3

Ruiguang Pagoda is easily one of the most celebrated historical landmarks in the city. Located on the southwest corner of Grand Canal, Ruiguang Pagoda was built in 247 B.C. with brick and wooden platforms. It was the first pagoda in Suzhou and has officially became a member of the Pan Gate Scenic Area.
Image by RussBowling on Flickr under Creative Commons License.
4

Confucian Temple is a temple dedicated to the memory of Confucius and philosophers of Confucianism. The landmark was originally founded by Fan Zhongyan in 1035, under the Northern Song Dynasty, however construction did not begin until 1474. The complex consists of two courtyards: one eastern and one western. The first courtyard is used for worship, while the second is home to the Confucian academy.
Image by kanegen on Wikimedia under Creative Commons License.
5

The Great Wave Pavilion is located at 3 Cāng Làng Tíng Jie. It is recognized with other classical Suzhou gardens as a UNESCO World Heritage Site. The Great Wave Pavilion was built in 1044 CE by the Song Dynasty poet Su Shunqing (1008–1048), on the site of a pre-existing imperial flower garden c 960 CE. It is the oldest of the UNESCO gardens in Suzhou, keeping its original Song Dynasty layout. The 1.6 (ha) garden is divided into two main sections. The garden is sited on a branch of the Fengxi Stream which forms a lotus pond. The garden has 108 leaky windows each one with a unique design.
Image by ChinaTravelSavvy.Com on Wikimedia under Creative Commons License.
Sight description based on wikipedia
6

Shi Quan Street is one of the most important shopping streets in the city, also home to a large number of first-rate shopping venues. Here you will find fashionable clothes, Su embroidery, splendid handcrafts, as well as antiques, paintings, pottery and porcelain.
Image by Matt's Life on Flickr under Creative Commons License.
7

7) The Master of Nets Garden (must see)

The Master of the Nets Garden in Suzhou is among the finest gardens in China. It is recognized with other classical Suzhou gardens as a UNESCO World Heritage Site. The garden demonstrates Chinese garden designers' adept skills for synthesizing art, nature, and architecture to create unique metaphysical masterpieces. The initial garden was first constructed over 800 years ago and even though its physical form has changed drastically since, the name and spirit of the garden still remain intact. The Master of the Nets is particularly regarded among garden connoisseurs for its mastering the techniques of relative dimension, contrast, foil, sequence and depth, and borrowed scenery.
Image by Chinatravelsavvy on Wikimedia under Creative Commons License.
Sight description based on wikipedia
8

Guihua Park is situated on the south-east section of Suzhou. Surrounded by Grand Chanel, this large park is also home to the southeast corner gate tower as well as the ancient city wall which once protected the city from enemies.
Image by miffuer on Flickr under Creative Commons License.