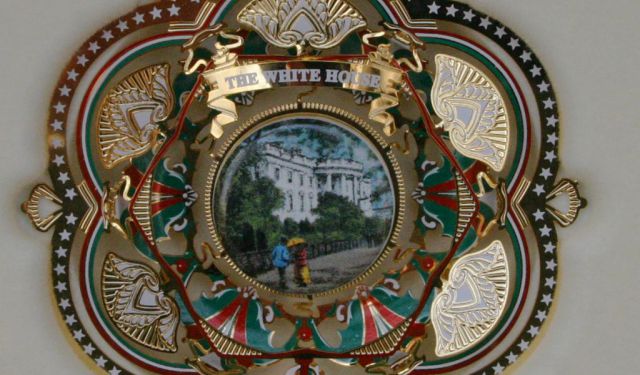 Image by dbking on Flickr under Creative Commons License.

It would be a pity to leave Washington DC without having explored its specialty shops and bringing home something truly original. We've compiled a list of gifts and souvenirs, which are unique to Washington D.C., that a visitor might like to purchase to reflect their visit.
How it works: Download the app "GPSmyCity: Walks in 1K+ Cities" from iTunes App Store or Google Play to your mobile phone or tablet. The app turns your mobile device into a personal tour guide and its built-in GPS navigation functions guide you from one tour stop to next. The app works offline, so no data plan is needed when traveling abroad.

Established in 1983, Capitol Hill Flea Market is one of the most diverse markets in the nation which is voted as the second best market in the world. Located between 7th & C Street SE in the Capitol Hill neighborhood, Washington DC, this flea market always offers a wide-ranging stock of antiques, collectables and vintage items. Over here, you can find various items from around the world such as ceramic sculptures, rugs, jewelry, painting, prints, frames, eclectic furnishings, vintage clothing, silverware and many more. Held every Sunday, this flea market gathers over 100 exhibitors who offer the visitors a wide range of international items.

Image by BAR Photography on Flickr under Creative Commons License.
2

Classic cufflinks with the seal of the United States Supreme Court will not only adorn your cuffs, but be a conversation starter as well. The cufflinks are gold-plated with navy blue background behind the seal, also in gold. The seal was established in 1782 after six years of design consultation. It features an eagle, the national bird, carrying a shield. The eagle is holding a banner in his mouth bearing the words, “E Pluribus Unum,” the motto of the United States. Above the eagle’s head is a grouping of 13 stars representing the 13 colonies which became states upon independence. At the eagle’s tail is one star representing the “One Supreme Court.”

Price for the cufflinks is $65.

Build your own model of this classic building, the home of every U.S. president since John Adams. This LEGO set comes with 560 pieces and a booklet on the history and fun facts of this iconic home. The White House is open to the public for tours arranged through your Congressperson or, for foreign nationals, through the Embassy of your country. Reservations must be made in advance. But it’s an amazing sight just from the open ellipse off Constitution Avenue or from Pennsylvania Avenue which is the front of the house. The LEGO set is appropriate for ages 12 and up.

What to buy here: Jigsaw Puzzles from the National Gallery of Art.

Enjoy some the beautiful paintings from the permanent collection at the Smithsonian National Gallery of Art anytime with fun jigsaw puzzles. The works of Mary Cassatt, Andy Warhol, Frank Lloyd Wright, among others, are available as 1,000 piece puzzles. Learn more about each of these renowned artists as you reassemble the colorful paintings. Puzzles are appropriate for ages 6 and up, and are a fun family project.

Certainly the most famous gem in the world, the Hope Diamond is on display at the Smithsonian Museum of Natural History. The diamond is believed to have it origins in India where it was discovered by a Frenchman who brought it back to France. The legend says that it was stolen from an idol and whoever owns it will be cursed. Whether that is true or not, the gem has passed through the hands of people who have certainly fallen on hard times. Sold first to Louis XIV of France, it passed down to Louis XVI and was lost after a raid on the Royal jewels after the execution of Louis XVI and Marie Antoinette during the French Revolution. Although what happened afterwards is uncertain, the diamond eventually ended up in the hands of a British banker by the name of Thomas Hope. It was kept in that family for three generations until his great-grand nephew was forced to sell because of his gambling debts. The diamond arrived in New York in 1902 and was eventually purchased by flamboyant Washington DC socialite, Evalyn Walsh McLean, who wore it often. She suffered misfortunes while owning the gem including the death of two of her children, her alcoholic husband running off, and financial problems. Upon her death, it was sold to Harry Winston, Inc., who then donated the diamond to the Smithsonian Institution. While not the real thing, of course, the gift shop at the museum sells a beautiful replica that can be worn as a pin or a pendant. The dazzling blue stone is glass and the white stones surrounding it are cubic zirconia. Curse not included.

In 1981, the first official White House ornament was sold and since then they have become a popular collector’s item. A new design is offered each year. Some honor past presidents including Thomas Jefferson and Woodrow Wilson; some depict famous scenes such as Washington crossing the Delaware; and others highlight historical buildings like the Capitol. An additional ornament was created in 2006 to commemorate the terrorist attacks on September 11, 2001. Many past ornaments are available. Prices start at $16.00 and up depending on availability. The 2011 ornament featured President Theodore Roosevelt and the 2012 ornament will honor President William Howard Taft. Ornaments are also available for charitable groups for fundraising. They are available at the White House Visitor Center and at many gift shops throughout the city and suburbs.

Georgetown is an area located in the northwest quadrant of Washington, D.C., along the Potomac River waterfront. Despite its proximity to downtown Washington, this former port has preserved its own distinct character. Many of the buildings along the tree-lined streets are over 200 years old. Take this walking tour to reveal all the secrets of Georgetown.