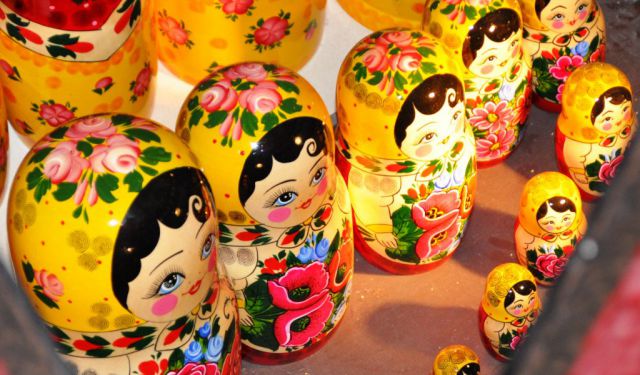 It would be a pity to leave Moscow without having explored its specialty shops and bringing home something truly original. We've compiled a list of gifts and souvenirs, which are unique to Moscow, that a visitor might like to purchase to reflect their visit.
How it works: Download the app "GPSmyCity: Walks in 1K+ Cities" from iTunes App Store or Google Play to your mobile phone or tablet. The app turns your mobile device into a personal tour guide and its built-in GPS navigation functions guide you from one tour stop to next. The app works offline, so no data plan is needed when traveling abroad.

"Krasnaya Moskva" ("Red Moscow") is a Russian perfume with a history. As well as the red flag and the portrait of Gagarin, it is a symbol of the Soviet époque, especially for ladies. Created in 1913 by Henri Brocard, an outstanding Moscow perfumer, French by origin, it was known under the name "The Empresses' Bouquet" and was dedicated to Maria Fyodorovna (Danish princess Dagmar), mother of Nikolay II, the last Russian emperor. Later on, after the Revolution, the Brocard perfumery was renamed into "Novaya Zarya" ("The New Sunrise"), and its chef-d-oeuvre also received a new name - Red Moscow. It is said to be highly appreciated by the famous Russian actress Lyubov Orlova and the first woman in space Valentina Tereshkova. Even today its bottle remains the same as it was designed at dawn of the Soviet era. However, today, in the 21st century, "Krasnaya Moskva" remains popular with Russian women. It has a strong and long-lasting fragrance with such opening notes as neroli and bergamot, jasmine and rose and ilang-ilang as basic notes and the trail composed of iris, vanilla and tonka beans. This sensual and feminine perfume is sold in "Novaya Zarya" stores located in the heart of the city. Limited editions of "Krasnaya Moskva" clad in more sophisticated souvenir bottles that can be found in the brand store situated at Gostiny Dvor (4, Ilyinka str), which is close to the Kremlin and the Red Square. Other shops of the network are located in 12, Nikitsky Avenue and 43, Arbat street.

Red caviar - salmon caviar, brought to Moscow from the Far East of Russia - has become world’s symbol of prosperity. Tiny and shiny semi-transparent balls in different shades of red resemble precious stones: they look beautiful on canapés and taste good. Besides, caviar is a very nutritious product. It is considered wholesome to one's brain, bones and eyes and helps to reinforce immune system. Caviar contains nearly all known vitamins and protein; it is the rare case when the proteins are 100% consumed by human organism. In the Far East, red caviar has always been the favorite food of hunters and fishermen; in some regions it even replaced bread. It was not until 1908 that they started selling it in Moscow and St. Petersburg thanks to the new technology of preservation. Since then, caviar has easily conquered Russian and foreign markets, and its price rapidly soared. Now caviar is a national delicacy. Its regular price is $10-15 for 100 grams. High quality caviar is sold in Yeliseevsky food store - the oldest one in Moscow, located in 14, Tverskaya street and working 24h a day. It can also be found in large supermarkets and premium-class shops such as "Azbuka vkusa" (8, Novinsky Avenue, 22 Sadovaya-Triumphalnaya).

What to buy here: Russian fur.

"Soft gold" - this is how Russians poetically call furs. No wonder: for many centuries furs were historically used as currency along with golden and silver coins and made up a premium export item. Hunt used to be one of the most important sources of income in this country, rich in dense forests, and when Siberia joined the Moscow kingdom in the 16th century, Russia has received, along with the mines of ordinary gold, vast quantities of the soft one. For a long time, fur was not a luxury item; it was necessary to survive the severe Russian climate. Even today to present your wife with a fur-coat of mink, sable or polar fox fur is considered as a sign of deep spousal attachment and care, as wearing furs is the best way to feel comfortable and look sexy. It has no sense to list all kinds of fur produced in Russia - from lambskin to precious ermines. A full-length fur coat will cost from $ 2000 to $10000 relevant of the sort of fur and its quality. It is most reasonable to buy furs at the fur factory in the north of the city or can visit the fur salon "Tri Lva" (Three Lions) at GUM at Red Square (open daily from 10 AM till 10 PM).

What to buy here: Zhostovo tray.

As well as a samovar, a Zhostovo hammered tray will make an outstanding decoration to any tea party, for it is not just a tray but firstly an artwork. The trays are hammered at the Zhostovo Manufactory which has been successfully working since 1825. The most popular motive is live-looking, slightly radiant fruit and flowers on a pitch-black background. The legend says that in the early 19th century Zhostovo painters used to travel about the country making sketches of what they wanted to paint on the trays, this is where such a large collection of floral designs comes from. Shiny apples, transparent grapes, enigmatic purple plums glow in the dark space of a tray with mysterious light: they resemble the fruit on the Italian Renaissance paintings. Sometimes, however, the trays show beautiful Russian landscapes and romantic old churches. More seldom they have portraits of people on them. Each tray created at the Zhostovo Decorative Art Manufactory is hand-painted and signed by the artist. Their price starts at $70.
Image by Ludmila Brus under Creative Commons License.
5

Founded in 1856 by a wealthy patron of art Pavel Tretyakov, State Tretyakov Gallery is famous for its unique collection of Russian fine art – from medieval icons to futurism and constructivism. The quality of exhibited works make it comparable to the French Orsay and the Italian Uffizi. It goes without saying that everyone wants to keep a small part of this beauty for themselves. Though you cannot buy an artwork from the gallery, you can nonetheless afford a large and beautiful book with great colorful photos and the detailed history of the best pieces exhibited in the museum. Printed on thick glossy paper , the album is nice to touch. The book is available both in Russian and in English and provides a detailed description of the published works. The museum's collections are represented by separate chapters. This is an elegant gift to please any book and art lover! You may acquire the album in the gallery itself on seeing the exhibition (10, Lavrushinsky Pass).
Opening times: Thursdays, Fridays, Saturdays: 10.00 am - 09.00 pm; Tuesdays, Wednesdays and Sundays: 10.00 am - 06.00 pm.
Image by Ludmila Brus under Creative Commons License.
6

No footwear will warm you so well in severe winter than the famous "valenki", specially made of felted wool to be worn in thirty and forty degrees below zero, when ordinary boots fail to protect you. The first felted boots in history are supposed to be worn by the nomads of the Great Steppe more than one thousand years ago. The peak of their popularity in Russia was the 19th and the beginning of the 20th centuries. Moreover, valenki still make part of the winter uniform of Russian army, for this footwear helped Russian soldiers to survive the bitter frost which accompanied the famous Stalingrad battle during the World War II.

For several decades after that valenki were generally considered as old-fashioned village footwear and worn in the city only in the coldest weather. Now the situation is strikingly different: felt boots are highly in fashion and make a source of inspiration for footwear designers who provide the valenki with rubber soles to make them serve longer. Valenki are made in different colors and decorated with leather, crystals and embroidery. It is a unique gift for keen fashion-lovers you will find nowhere else. If you visit the Museum of Valenki (12, 2nd Kozhevnichesky pass), you will not only see old and modern designs, but also have a chance to participate in felting master-class and try to make felted boots yourself! This extraordinary museum works on Tuesday, Wednesday, Friday and Saturday from 11 AM to 5 PM. Don't forget to visit the museum store! Other places you can acquire valenki are Arbat and the gift stalls between Red and Theatre squares.
Image by akk_rus on Wikimedia under Creative Commons License.

The Garden Ring is the major circular avenue around downtown of Moscow. Originally, the Garden Ring was built as a defensive fortification for Moscow. Today, the circumference of sixteen kilometers of the avenue is rich in architectural beauties, monuments, museums etc. The tour suggested below will help you get more familiar with Moscow's Garden Ring and its fascinating sights.

Museum Walk in the Center of Moscow

Moscow is the capital of Russia and the cultural center of the country. The city boasts a large number of museums which reveal Russia's culture and development. Take this hour tour to visit Moscow's most representative museums in the center of the city.

Also known as VDNKh, the All-Russian Exhibition Center in Moscow is a large complex that occupies a territory of 3 square kilometers and has 400 buildings. The complex provides commercial space for major exhibits, and houses Russia's most important monuments, such as Worker and Kolkhoz Woman, the Friendship of Nations fountain, monument to the Conquerors of Space etc. Don't miss the...  view more

A Walking Tour in Kitai-Gorod, Moscow

Kitai-Gorod means China town in the Russian language. This is one of the oldest historical sites in the center of Moscow. In the past, Kitai-Gorod's territory was occupied by traders and craftsmen. Today the famous district is a preserved zone, due Gostiny Dvor, Moscow's first Print Yard, and other meaningful attractions that are presented in the guide below.