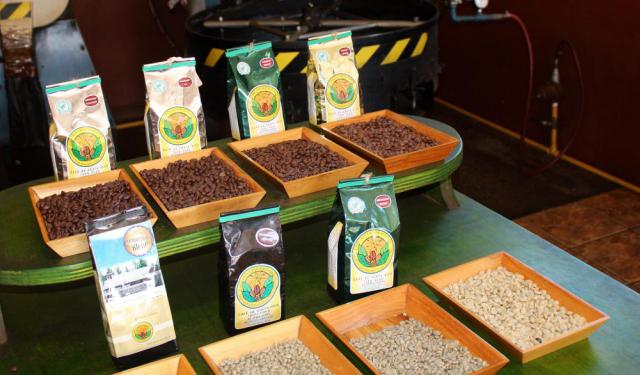 Image by The LEAF Project on Flickr under Creative Commons License.

It would be a pity to leave San Jose without having explored its specialty shops and bringing home something truly original. We've compiled a list of gifts and souvenirs, which are unique to San Jose, that a visitor might like to purchase to reflect their visit.
How it works: Download the app "GPSmyCity: Walks in 1K+ Cities" from iTunes App Store or Google Play to your mobile phone or tablet. The app turns your mobile device into a personal tour guide and its built-in GPS navigation functions guide you from one tour stop to next. The app works offline, so no data plan is needed when traveling abroad.

In a country where the annual rainfall measures 250 centimeters nationwide, an umbrella is a must-have accessory. Rego is a household name in Costa Rica that has been selling paraguas (for men) and colorful sombrillas (for women) for over sixty years. Close to the equator, it is also popular to carry a sun umbrella. If you are planning to spend several days at the beach, you can pick up a beach umbrella at Rego.

Compact designs small enough to fit in a purse start at $8. Beach umbrellas range in price from $60 to $85. While many stores and supermarkets throughout Costa Rica sell the Rego brand, it’s fun to make a purchase from the tiny shop on the corner of Avenida 2 and Calle 1o, which tends to customers over the counter. Rego offers a similar intimate and customer-oriented environment in a slightly larger shop just up the street on Avenida 4, one of the capital’s pedestrian walkways (www.regocr.com or 506-2222-2163).

What to buy here: Umbrellas.

Image by Free for commercial use No attribution required under Creative Commons License.
2

Costa Rica refers to the coffee bean as a “grano de oro,” or gold nugget. Coffee has played a major role in the country’s development. Big name brands and boutique labels decorate supermarket shelves, and hand-weighed pounds pass straight from the roaster to the customer in coffee shops. One-pound bags selling for as little as $3 are sure to please even the most discriminating coffee palate.

Auto Mercado supermarkets throughout the capital have a well-stocked coffee aisle displaying the popular 1820 and Café Britt brands, among others. But if you want to select fresh-roasted beans from a bin, try El Tostador, located on Avenida Central and Calle 10.

What to buy here: Coffee

Image by Aleat88 on Wikimedia under Creative Commons License.
3

The fact that Costa Rica is home to 4 % of the world’s biodiversity makes it a stunning place to photograph. It’s no surprise that stacks of coffee table books grace the shelves of bookstores. Magical Trees by Juan José Sergio and Giancarlo Pucci (2nd Edition), a soft-covered book about the trees of Costa Rica with text in English and Spanish ($38). (One of the writers is Jaime Gambo from Costa Rica’s famous band Malpais.)

Among the large selection of creative bilingual children’s books, there is a story and coloring book called Magical Trees ($7) that talks about five of Costa Rica’s native trees. You can also find coffee table books highlighting the guaria morada (orchid), which is Costa Rica’s national flower, and birds. Costa Rica is home to 860 recorded bird species. (That’s more than the recorded number in the U.S.A. and Canada combined!)

Along the city’s bustling Avenida Central are Libreria Lehmann, Universal and Libreria Internacional, all of which sell a great variety of books about Costa Rica.

What to buy here: Books
Image by Beverly Gallagher under Creative Commons License.
4

Forming part of Costa Rica’s dynamic arts scene are jewelry designers working in gold, silver, glass, semi-precious stones, clay and recyclable materials. Boutique shops throughout San José sell a variety of unique designs. Prices range from $10 to the hundreds. The gift shop in the Pre-Columbian Gold Museum sells Pre-Columbian replicas and modern designs in gold (14K solid and 24K plated) and silver (950). The jewelry is designed and made by artists producing pieces exclusively for the Pre-Columbian Gold Museum (www.museodelbancocentral.org or 506-2243-4214).

Outside of purchasing goods on a visit to an indigenous community or at an artisan fair, the best place in the capital to buy indigenous arts and crafts is Chíeton Morén. With the help of the La Dolorosa Catholic Church and the La Flor Group in Boruca, San José now has a museum and gallery dedicated to Costa Rica’s indigenous people. The space is designed to educate visitors and provide an opportunity for all indigenous groups to sell their arts and crafts without an intermediary.