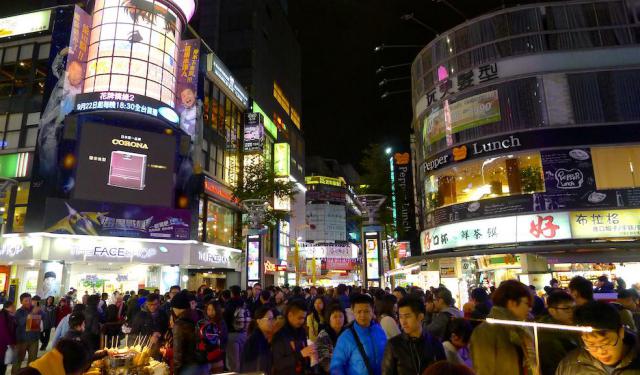 Image by Kyle.Mullaney on Wikimedia under Creative Commons License.

It would be a pity to leave Taipei without having explored its specialty shops and bringing home something truly original. We've compiled a list of gifts and souvenirs, which are unique to Taipei, that a visitor might like to purchase to reflect their visit.
How it works: Download the app "GPSmyCity: Walks in 1K+ Cities" from iTunes App Store or Google Play to your mobile phone or tablet. The app turns your mobile device into a personal tour guide and its built-in GPS navigation functions guide you from one tour stop to next. The app works offline, so no data plan is needed when traveling abroad.

Clothing styles in China, just like cultural trends, changed with each dynasty. During these changes different aspects of the Chinese culture evolved and reflected in the way people dressed as well. The two most known traditional Chinese styles of clothing are - Han clothing, worn previous to the Qing Dynasty; and Manchu clothing, worn during and after the Qing Dynasty. It was during this dynasty that the modern version of traditional clothing, like the Chinese long gown for men (changshan) and the qipao for women (cheongsam), appeared. After the abolition of imperial China, clothing styles changed again, reaching a peak during the Cultural Revolution when everything related to the past imperial era was considered undesirable and therefore had to be dismissed. However lately, traditional clothing began to be popular once again and there is a general tendency to restore traditional Chinese culture all over China. Traditional Chinese clothing costs from $50 to over $100.

In China, calligraphy is considered a true form of art, similar to painting, and can sometimes be more expensive than paintings. Calligraphy has developed since the appearance of Chinese characters (approximately 4000 BCE) and has been permanently improved over the centuries. Since calligraphy was considered an art form, it was only natural that works were produced in order to showcase it, often in the form of wall hanging scrolls. Typically wall scrolls may have one or several Chinese characters painted on them, or they may have signs of the Chinese zodiac. They are available at affordable prices, starting at $10-$30, but may be more expensive – over $100.

Image by Charles Chan on Flickr under Creative Commons License.
3

What to buy here: Pineapple cake.

Pineapple cakes have been called Taipei's "Golden Bricks". With locally grown ingredients wrapped in a western-style pastry, the cakes have become very popular with tourists. As a result, their production has grown 16 fold during the last 6 years. The cake is both crisp and soft, with a rich flavor and an aroma of the delicious fruit it is named after. They are sweet, without being oily. The low water content gives the pineapple cakes an easy-to-preserve quality and a shelf life of one month or longer. They are also easy to carry, wrapped in square packages with the Chinese characters for "Taiwan", images of pineapples and/or names of the towns which grow them. They are not particularly expensive, with 12-pack boxes ranging from NT$10 to NT$20.

Pineapple symbolizes "bringing health" in Taiwan. Thus, the cake is a great gift carrying over some of the symbolism and representing the Taiwanese hospitality.
Image by Usodesita on Flickr under Creative Commons License.
5

What to buy here: Oilpaper Umbrellas.

These umbrellas are among the most visually stunning mementos one could bring from Taipei. The umbrellas are made of an intricate bamboo frame and transparent paper, both artfully painted with intricate designs and then lacquered. Aside from providing shade and, surprisingly, shelter from the rain, these umbrellas are a traditional component during wedding ceremonies; they symbolize a happy, complete life. They are also believed to bring good luck and are often given as gifts at symbolic events in the family.