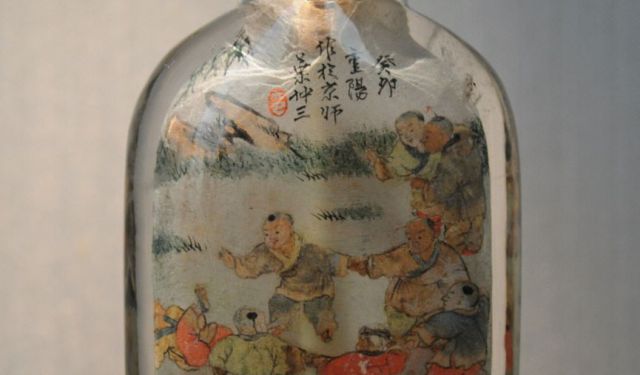 It would be a pity to leave Beijing without having explored its specialty shops and bringing home something truly original. We've compiled a list of gifts and souvenirs, which are unique to Beijing, that a visitor might like to purchase to reflect their visit.
How it works: Download the app "GPSmyCity: Walks in 1K+ Cities" from iTunes App Store or Google Play to your mobile phone or tablet. The app turns your mobile device into a personal tour guide and its built-in GPS navigation functions guide you from one tour stop to next. The app works offline, so no data plan is needed when traveling abroad.

What to buy here: Chinese silk.

The history of silk began in ancient China, when according to legend, empress Leizu made the discovery as a silk cocoon fell into her tea. At first, silk was only reserved for use at the imperial court and, on occasion, as gifts from them. Later, it spread rapidly and became a very popular luxury fabric. Silk was in great demand and for a while China was the only country to supply it. However, in time, production began in neighboring Korea and India as well. Nowadays, there are a great variety of silk-made articles available, from clothing to household items; and while sometimes buying genuine silk garments may prove to be quite expensive, it is always a good idea to buy silk household accessories, like cushions or bags. Silk items cost from $40.

Image by Kim Mc on Flickr under Creative Commons License.
2

All-cloth shoes, sole included, have been traditionally worn by most Chinese officials for centuries; and for the last 150 or so years Neiliansheng has made, what is considered by most, the best cloth shoes. Neiliansheng was established in 1853 and specializes in producing and selling cloth shoes, their footwear was highly appreciated by top officials from the imperial court of the past and by the now leaders of China alike. The shoes were popular due to their bright black satin and 32 layers of cloth used for the sole. Neiliansheng shoes have been considered luxury items during imperial times, and nowadays are considered a form of art. Even if these kind of shoes are usually more expensive than others (prices range between $23 and $51), they are still very popular.

Image by ahenobarbus on Flickr under Creative Commons License.
3

If you love collecting antiques, the best place to find the very essence of Chinese culture is Liulichang Street in Beijing. Tourists flock this street to find exquisite Chinese paintings, handicrafts, antiques and calligraphy works.

This street is close to Xicheng District’s Peace Gate. Liulichang was popular for its glaze materials. Right from 1271, as early as in Yuan Dynasty, supply of glazed tiles for palace decorations went from the glaze factories in this area.

In fact, Liulichang has provided the glaze materials for Yuan, Ming and Ling dynasties. Glazed tiles from here were used to decorate mansions, palaces and gardens including the famous Summer Palace and Forbidden City.

A lot of antiques from the palaces came into the market after the collapse of Qing Dynasty in 1911. Liulichang became one of the most famous distribution centers of calligraphy works, antiques, handicrafts and Chinese paintings. At the Liulichang Antiques Street, you will find many Chinese featured items such as ink-stick, calligraphy brush, rice paper and ink-slab.

Liulichang Street as you find it today was renovated in 1980s. Tourists flock this street to purchase exquisite Chinese artifacts at some of the most renowned shops. The oldest shops here are in existence for the past 100 years and they employ professionals who are trained at identifying original and authentic antiques. Most of the vendors on this street work between 8:00 am and 6:00 pm.
Image by china_puwa / Alex Yang on Wikimedia under Creative Commons License.
4

-Chinese calligraphy wall scrolls. In China, calligraphy is considered a true form of art, similar to painting, and can sometimes be more expensive than paintings. Calligraphy has developed since the appearance of Chinese characters (approximately 4000 BCE) and has been permanently improved over the centuries. Since calligraphy was considered an art form, it was only natural that works were produced in order to showcase it, often in the form of wall hanging scrolls. Typically wall scrolls may have one or several Chinese characters painted on them, or they may have signs of the Chinese zodiac. They are available at affordable prices, starting at $10-$30, but may be more expensive – over $100.

-Eight Treasures Inkpad was invented in 1683, it is made with eight valuable ingredients, such as musk, plum, cinnabar, vermillion hue, natural jade and preserved oils. It was special use stationery at the imperial court, as well as being preferred by painters and calligraphy professionals. The Eight Treasures Inkpad has kept the characteristics of ancient Chinese inkpads, the process of production still involves over 30 separate steps and when ready, it is left to sit for 6-10 months before being used. Nowadays, these inkpads are used for historical records or signing of important contracts. The prices for an Eight Treasure Inkpad range from $20 to $80.
Image by Charles Chan on Flickr under Creative Commons License.
5

One of the most popular shopping areas frequented by locals and tourists is Xidan Area. There are at least 6 huge shopping malls here that sell a variety of interesting things at affordable rates. The malls resemble US departmental stores and are constructed in old fashioned, traditional Chinese style.

Almost all the malls have a total of six to seven floors. The topmost floor usually has shops that sell high fashion clothing, accessories and electronics. You will find an extensive selection of electronic items such as Hi-fi, DVD and TV here.

You will also find a giant mobile phone mall in addition to the main malls. Here you will find a stunning range of mobile phones in all three floors. Xidan Area also features two of the largest book stores in Beijing namely the Xinhua Book Store and Beijing Books Building. Though most of the books here are Chinese, you can also find a section selling foreign language books.

Main Street that connects the malls to the station features a lot of clothing stores. Here you can find mid-quality, mid-range, highly affordable Hong Kong and Chinese brands. On your visit to the main Xidan mall, go to the upper floors where you will find women’s fashion accessory stores. You can shop to your heart’s content for a variety of attractive accessories such as necklaces, sunglasses, belts, earrings, watches and scarves.

Most of the stores here open from 9:00 am to 9:00 pm.
Image by stephenrwalli on Flickr under Creative Commons License.