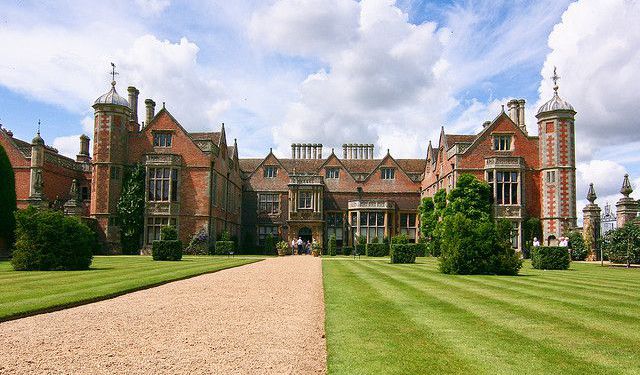 Image by IDS.photos on Flickr under Creative Commons License.

The Charlecote walk offers you a great stroll through the English countryside. The impressive Victorian Charlecote Park, the surrounding grounds and the Hampton Lucy village, are wonderful to explore and here you will see Shakespeare's hometown, which is just four miles away.
How it works: Download the app "GPSmyCity: Walks in 1K+ Cities" from iTunes App Store or Google Play to your mobile phone or tablet. The app turns your mobile device into a personal tour guide and its built-in GPS navigation functions guide you from one tour stop to next. The app works offline, so no data plan is needed when traveling abroad.

The Wellesbourne Wartime Museum, located close to Wellesbourne village, is an unusual find in this peaceful countryside. The underground power command and bunker have some interesting artifacts related to British aviation from the time of WWII. Parked on the airfield are a few old military planes, including a 1960s' Vulcan. There's also a flight school.
Image by MilborneOne on Wikimedia under Creative Commons License.
2

Charlecote Park is a grand 16th century country house, surrounded by its own deer park, on the banks of the River Avon near Wellesbourne, about 4 miles (6 km) east of Stratford-upon-Avon and 5.5 miles (9 km) south of Warwick, Warwickshire, England. It has been administered by the National Trust since 1946 and is open to the public. It is a Grade I listed building

The Lucy family, who came to England with William the Conqueror, has owned the land since 1247. Charlecote Park was built in 1558 by Sir Thomas Lucy, and Queen Elizabeth I stayed in the room that is now the drawing room. Although the general outline of the Elizabethan house remains, nowadays it is in fact mostly Victorian.

The Great Hall has a barrel-vaulted ceiling made of plaster painted to look like timber and is a fine setting for the splendid collection of family portraits. The original two-storey Elizabethan gatehouse that guards the approach to the house remains unaltered. Charlecote Park covers 185 acres (75 ha), backing on to the River Avon.

Image by yrrek on Flickr under Creative Commons License.
Sight description based on wikipedia
3

The deer park is located on the outskirts of the Charlecote Park. Deer have been present here since Tudor times, and are very tame. The herd is usually gathers close to the river and local sheep keep them company. Visitors can approach them to a certain distance, but are not allowed to feed them, or disturb the herd.
Image by Johann-Nikolaus Andreae on Wikimedia under Creative Commons License.
4

Charlecote Park is a 16th century country house in a deer park, on the banks of the River Avon. Charlecote Park was built in 1558 by Sir Thomas Lucy, and Queen Elizabeth I stayed in the room that's now the drawing room. Although the general outline of the Elizabethan house remains, today it is mostly Victorian in design and decor. Successive generations of the Lucy family had modified Charlecote Park over the centuries, but in 1823, George Hammond Lucy inherited the house and set about renovating it. The Great Hall has a barrel-vaulted ceiling made of plaster painted to look like timber, and it's a fine setting for the splendid collection of family portraits. Other rooms have richly colored wallpaper, decorated plaster ceilings and wood paneling. There are magnificent pieces of furniture and fine works of art, including a contemporary painting of Queen Elizabeth I. The original Elizabethan gatehouse that guards the approach to the house remains unaltered.
Image by yrrek on Flickr under Creative Commons License.
Sight description based on wikipedia
5

The Saint Leonard Church is situated outside Charlecote Park grounds. The beautiful 15th century church, originally founded as Lucy's family chapel, was completely rebuilt in 1851, and it became a masterpiece of Victorian Gothic style. The Northern chapel is the location of the manor's founders' memorials - the Lucy family - that dates back to 1600, and are considered to be the oldest remaining graves. On the church grounds there is a cemetery which contains all of Charlecote Park's previous owners.
Image by spectrefloat on Flickr under Creative Commons License.
6

The Charlecote Mill is a fully operating water-powered mill, located on the outskirts of the Hampton Lucy village. The site was built around the 19th century, and has remained practically unchanged. The mill welcomes visitors so they can learn about the flour-making process. There's also a little shop where you can buy flour and some souvenirs.
Image by Chris Allen on Wikimedia under Creative Commons License.
7

Saint Peter Church is one of the earliest Gothic churches in England. Located in the small village of Hampton Lucy, it was built in the 1826 on the site of a previous church. This outstanding edifice is famous for its east-looking stained-glass window, illustrating episodes from St. Peter's life. The high, vaulted ceiling creates the spectacular feeling of a spacious cathedral.
Image by chris .p on Flickr under Creative Commons License.
8

The Boars Head is a pub in the village of Hampton Lucy. The present site comes from the 17th century and is a traditional English pub for locals' gatherings and it's a perfect recreational and dining place for county visitors. The pub offers superb homemade food and a nice selection of beer, mostly from local brewers.
Image by yumiang on Flickr under Creative Commons License.