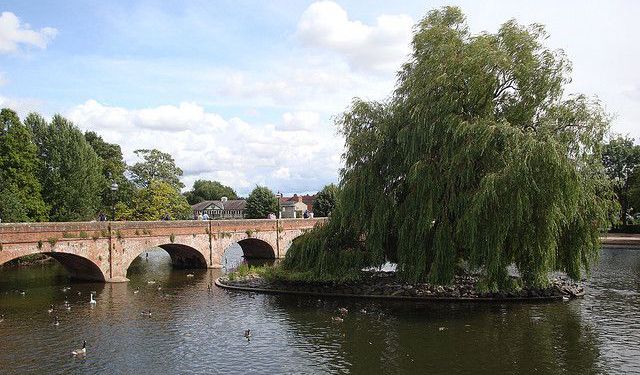 Image by mdid on Flickr under Creative Commons License.

Stratford-Upon-Avon is located on both banks of the river Avon, mainly on its west side, and it is very picturesque, especially on sunny spring and summer days. The banks are full of ducks, boats and river trams. The stroll along the river is relaxing and the waterside trails always attract both tourists and locals.
How it works: Download the app "GPSmyCity: Walks in 1K+ Cities" from iTunes App Store or Google Play to your mobile phone or tablet. The app turns your mobile device into a personal tour guide and its built-in GPS navigation functions guide you from one tour stop to next. The app works offline, so no data plan is needed when traveling abroad.

Stratford Butterfly Farm is a visitor attraction. A leafy tropical environment is simulated inside large greenhouses. There are numerous free flying butterflies, a few free flying birds, a pool containing fish, and running water. There are also insects and spiders living in glass displays.

Caterpillar Room which houses caterpillars, pupaes, eggs and specialist plants for butterfly breeding. This is the large walk through glasshouse.

Insect City houses the more exotic insects, such as beetles, praying mantis, stick insects and giant millipedes. The insects are all behind glass and above your head is a glass confinement of leaf cutter ants. A section in insect city is called 'mini beast' and has snails and crabs.

Arachnoland houses over 15 species of spider from black widows to tarantulas. They also have the world's largest spider species, the Goliath birdeater. Arachnoland also includes a collection of scorpions including Imperial Scorpions that glow in the dark. Once again these are all behind glass.


Image by Snowmanradio on Wikimedia under Creative Commons License.
Sight description based on wikipedia
2

The Boat Rowing Club is an old sports establishment here in Straford-Upon-Avon and it's one of the best-known in Britain. In 1874, when the first regatta took place on the river Avon, the club grew into a fully-operating boat rowing club and water sports championship site. After rowing became practically a national sport in England, the club gained fame for Stratford-Upon-Avon.
Image by ell brown on Flickr under Creative Commons License.
3

In 1877 a committee was created in Stratford-upon-Avon to erect a memorial to Shakespeare. This originally comprised a theatre building, to be sited on land donated by the bank of the Avon within sight of the church where Shakespeare was buried.

A statue was also created in 1888, the work of Lord Ronald Gower. This is situated in Stratford's Bancroft Gardens. The monument shows Shakespeare seated on a pedestal, surrounded, at ground level, by statues of Hamlet, Lady Macbeth, Prince Hal, and Falstaff. These characters were intended to be emblematic of Shakespeare's creative versatility: representing Philosophy, Tragedy, History, and Comedy.

Another statue is present in a niche on the exterior of the town hall building.

Bacroft Basin is part of Stratford Canal and the most picturesque and most photographed site in the heart of Statford-Upon-Avon. The lock offers breathtaking views of the Avon river, the towering Trinity Church, Shakespeare Royal Theater and both Tramway and Clopton Bridges. It is also a marina for Avon boats and river trams.
Image by Nigel's Europe on Flickr under Creative Commons License.
5

Bancroft Gardens overlooks the river Avon and is a public garden that draws visitors every sunny and even cloudy day. Located just in front of the Royal Shakespeare Theater, it's also a summer gathering venue for street artists. The far end of Bancroft Gardens has the Shakespeare statue, also known as Gower Memorial, and in the center of it, the public can enjoy the newly-built Commemorative Fountain in honor of the 800th jubilee of Stratford-Upon-Avon being granted the status of market town by King Richard I.
Image by ell brown on Flickr under Creative Commons License.
6

The theatre has a new Rooftop Restaurant and Bar with views over the River Avon, a Riverside Cafe and Terrace, a Colonnade linking the Royal Shakespeare and Swan Theatres together for the first time, the PACCAR Room exhibition space, and a 36m high Tower which provides circulation and views across Stratford-upon-Avon and the surrounding area from its 32m high viewing platform. There is also a riverside walk which stretches from the Bancroft Gardens, past the theatre, towards Holy Trinity Church.

The whole building is now accessible for the first time for visitors, performers and staff with disabilities. There are three times as many dedicated wheelchair spaces in the new Royal Shakespeare Theatre auditorium in comparison to the previous auditorium, new lifts (there were no public lifts in the previous building), accessible toilets on all levels and no steps on the riverside walk, which previously had many stepped levels.

Avon Bank Gardens is a secluded public garden overlooking the river, located at the edge of the Holy Trinity Church's grounds. Gardens' Lock is also a station terminus for the famous mechanical chain ferry, the only one of its kind still working in all of Britain. The walk-through from the Royal Shakespeare Theater to the Trinity Church and way over to the opposite bank, is peaceful and picturesque, and offers visitors peace and tranquility.
Image by puptoes74 on Flickr under Creative Commons License.
8

8) Collegiate Church of the Holy and Undivided Trinity (must see)

The Collegiate Church of the Holy and Undivided Trinity is a Grade I listed parish church of the Church of England. It is often known simply as Holy Trinity Church or as Shakespeare's Church, due to its fame as the place of baptism and burial of William Shakespeare. More than 200,000 tourists visit the church each year.

The church has a large three manual pipe organ which dates from 1841 by the organ builder William Hill. It has undergone several restorations by Hill Norman and Beard, and Nicholson. A specification of the organ can be found on the National Pipe Organ Register.

The church is open to visitors for much of the year. A small contribution is requested to access the chancel and sanctuary in which Shakespeare is buried. Holy Trinity is a member of the Greater Churches Group. The Royal Shakespeare Company performed Henry VIII in the church in 2006 as part of the Complete Works Festival. It is an active parish church serving a parish of some 17,000 people.

William Shakespeare, poet and playwright, was baptised in Holy Trinity on 26 April 1564 and was buried there on 25 April 1616.