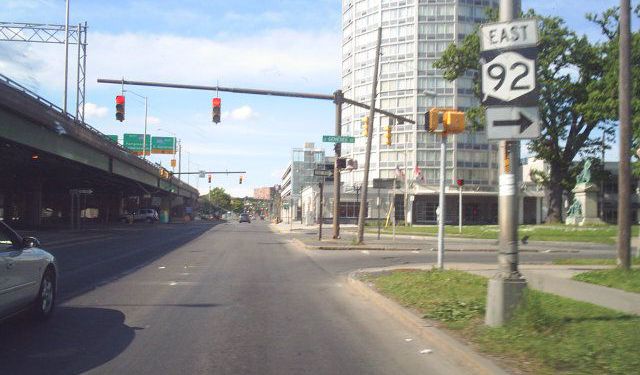 Image by dougtone on Flickr under Creative Commons License.

Daily life in a city is always very busy, and Syracuse is no exception. On this tour you will visit some of the most frequented places in Syracuse, places where people go to work, study, eat, and relax. Take this tour to visit some of the many interesting places in Syracuse, and experience life as residents of Syracuse do.
How it works: Download the app "GPSmyCity: Walks in 1K+ Cities" from iTunes App Store or Google Play to your mobile phone or tablet. The app turns your mobile device into a personal tour guide and its built-in GPS navigation functions guide you from one tour stop to next. The app works offline, so no data plan is needed when traveling abroad.

The Westcott Theater used to be a cinema until 2008 when it was transformed into a live music venue. It can accommodate up to 700 people. The theater features local, regional, and national artists, representing all genres of music. In 2010 the theater began hosting comedy troupes and screening movies. The theater has a bar where you can order just about anything you could possibly want to drink.
Image by DanBrady on Flickr under Creative Commons License.
2

Thornden Park is a 76 acres (31 ha) is the second largest in the city after Burnet Park. It was purchased by the city in 1921 and has become a favorite wedding location in the Syracuse park system.

The park was listed on the National Register of Historic Places in 1994 as part of the Historic Designated Landscapes of Syracuse, New York.

One of the more popular attractions in the park is the E. M. Mills Memorial Rose Garden, dedicated in 1924 on 2 acres (8,100 m2) at the southwest entrance to the park, across Ostrom Avenue from Syracuse University. Since 1970, the Syracuse Rose Society has maintained the garden in cooperation with the City of Syracuse Department of Parks. Currently, the garden hosts 368 different varieties of roses (3850 plants in all) that surround a central gazebo.

Image by DASonnenfeld on Wikimedia under Creative Commons License.
Sight description based on wikipedia
3

Syracuse University, commonly referred to as Syracuse, 'Cuse, or SU, is a private research university. Its roots can be traced back to Genesee Wesleyan Seminary, founded by the Methodist Episcopal Church in 1832, which also later founded Genesee College. Following several years of debate over relocating the college to Syracuse, the university was founded independent of the college in 1870.

Since 1920, the university has identified itself as nonsectarian, although it maintains a relationship with The United Methodist Church. Syracuse was elected to the Association of American Universities in 1966 but withdrew its membership in 2011 due to diverging views in evaluating criteria between the University and the AAU.

The campus is located in the University Hill neighborhood of Syracuse, east and southeast of downtown, on one of the larger hills. Its large campus features an eclectic mix of buildings, ranging from nineteenth-century Romanesque structures to contemporary buildings. SU is organized into 13 schools and colleges, with nationally recognized programs in information studies and library science, architecture, communications, business administration, public administration, engineering and the College of Arts and Sciences.

4) Rock of the Marne Monument

The Rock of the Marne Monument was built by famous sculptor Roland Hinton Perry. It is dedicated to the men of the 38th Infantry/3rd Division of the U.S. Army. Men in this division fought in World War I in the Second Battle of the Marne on July 15, 1918. Fellow soldiers fighting in the trenches in France raised the money to build a monument to their fallen comrades, but when they returned to the United States they lost a great deal of what they had raised when exchanging French francs and German marks into U.S. dollars. They asked Congress to provide the remaining funds they required so that they could complete the monument, and the government complied. The monument is located in Billings Park at the intersection of South Salina Street and South Warren Street.
Image by mr.thalweg on Flickr under Creative Commons License.
5

The Mission Restaurant is located in a historic building, which was constructed in the 1840s. It originally served as the Syracuse Wesleyan Methodist Church and later as a way station on the Underground Railroad. The basement of the building has a tunnel that was used by church members to help fugitive slaves hide from their pursuers. Today the building houses The Mission Restaurant, which serves a combination of Mexican, Southwestern and South American cuisines. The restaurant is open Monday from 11:30 a.m. to 2 p.m., Tuesday to Friday from 11:30 a.m. to 9 p.m., Saturday from 5 p.m. to 10 p.m., and Sunday from 11 a.m.- 3 p.m., 5 p.m. - 9 p.m.
Image by Kurt Reichardt on Flickr under Creative Commons License.

Syracuse has an active nightlife, and there are many clubs, lounges, bars and pubs where you can go to relax, have a drink, listen to music, and dance. Take this self-guided walking tour to visit some of the best entertainment venues and hot spots in Syracuse.