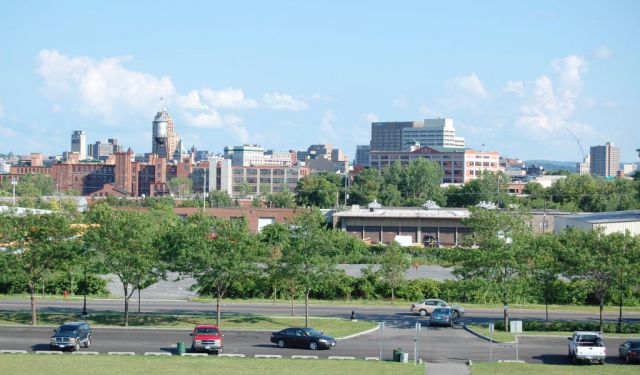 Image by Steve Hagy on Flickr under Creative Commons License.

Syracuse has a storied history, which you can learn about by visiting the city's many museums and art galleries. Syracuse has served and continues to serve an important role in shaping the culture of central New York. Take this tour to explore the history and art of this beautiful city.
How it works: Download the app "GPSmyCity: Walks in 1K+ Cities" from iTunes App Store or Google Play to your mobile phone or tablet. The app turns your mobile device into a personal tour guide and its built-in GPS navigation functions guide you from one tour stop to next. The app works offline, so no data plan is needed when traveling abroad.

1) Museum of Science and Technology (must see)

The Milton J. Rubenstein Museum of Science and Technology (often referred to as the MOST) includes multiple exhibits and a domed IMAX movie theatre. It is located in a historic building, the former Syracuse Armory.

The original museum, then known as the Discovery Center, opened its doors on November 15, 1981 in a storefront at 321 South Clinton Street in downtown Syracuse. This first hands-on, participatory science museum in Upstate New York hosted over 42,000 in its first year and consistently had the highest visitor density ratio in the nation.

By the late 1980s, museum officials began to consider a new location for the museum, which had become an important community asset visited by more than 800,000 people.

In 1992, New York State and the federal government accepted the Discovery Center’s proposal to open a Museum of Science & Technology in the Armory building.

It is also is home to the MOST Science Shop where toys, games, and science education products can be purchased.


Image by CaptMikey9 on Flickr under Creative Commons License.
Sight description based on wikipedia
2

The Open Hand Theater's International Mask and Puppet Museum was originally built in 1890 by Charles L. Hoffman to serve as his home. It was later a Union Hall, then a church, until it was bought by the Open Hand Theater and transformed into a museum. The museum contains masks and puppets from all around the world, which are classified according to their geographical origins. The theater has a gift shop where a selection of masks and puppets are sold. Both the museum and the gift shop are open before and after the performances.
Image by Michelle on Flickr under Creative Commons License.
3

The Onondaga Historical Association Museum and Research Center has a varied collection, which will appeal to many different interests. It contains exhibits dedicated to the Underground Railroad, the Franklin Automobile, and more. Admission to the museum is free, although donations are encouraged. The research arm of the organization has extensive archives of original, historical documents. Admission to the research center is free for members, $7 for visitors, and $4 for students. The Museum and Research Center is open Wednesday to Friday from 10 a.m. to 2 p.m. and Saturday from 11 a.m. to 3:30 p.m.
Image by dpape on Flickr under Creative Commons License.
4

4) Everson Museum of Art (must see)

The Everson Museum of Art is a major Central New York museum focusing on American art.

The Everson houses roughly 11,000 pieces of art, including paintings, sculpture, ceramics, and video.

Paintings include one of Gilbert Stuart's portraits of George Washington, Edward Hicks's The Peaceable Kingdom, and works by Eastman Johnson, Charles Burchfield, Helen Frankenthaler, and others.

The Syracuse China Center for the Study of Ceramics is one of the largest ceramics collections in the nation, with pieces ranging from ancient sculpture and Ming dynasty porcelain up to contemporary works.

The museum established one of the first video art collections in the United States, its video collection is the largest in the world. Bill Viola's first job was as a video technician at the Everson; his works are now in the collection.

The museum also has a collection of Arts and Crafts Movement furniture, featuring a number of works of Gustav Stickley.

The building that today houses the Erie Canal Museum was used by the New York State Department of Public Works until 1954. In 1956 the building was to be given to the New York State Department of Education, but the governor vetoed this proposal, believing that the building might stand in the way of a future highway interchange. After intense lobbying from the Junior League of Syracuse, the building was given to local authorities under the condition that it house a “public canal museum”. This is how in 1962 the Erie Canal Museum came into existence and the last remaining Weighlock Building in America was preserved. The museum is visited every year by thousands of people from all around the world. The museum is open Monday to Saturday from 10 a.m. to 5 p.m. and Sunday from 10 a.m. to 3 p.m. It is closed on official holidays.
Image by Robert Gray on Flickr under Creative Commons License.
6

Art Rage is an art gallery that has a new approach to art. The artwork on display at the gallery pushes boundaries and challenges stereotypes. It encourages critical thinking through its unique collection of pieces by emerging and established artists. The gallery is usually open Wednesday - Friday from 2 p.m. to 7 p.m. and Saturday from 12 p.m. to 4 p.m. The gallery is closed between exhibitions.
Image by Dominic's pics on Flickr under Creative Commons License.