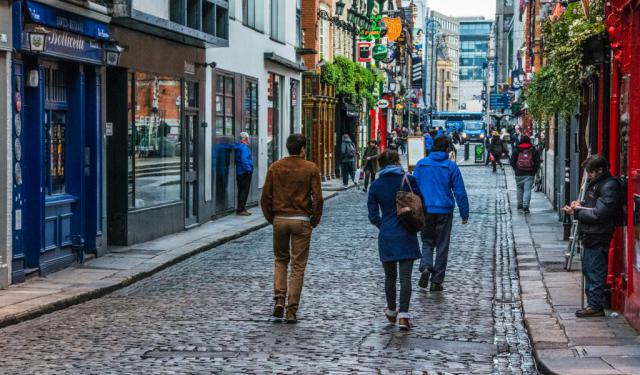 Image by Superbass on Wikimedia under Creative Commons License.

Temple Bar is an area on the south bank of the River Liffey in central Dublin, Ireland. Unlike the areas surrounding it, Temple Bar has preserved its medieval street pattern, with many narrow cobbled streets. It is promoted as Dublin's cultural quarter and has a lively nightlife that is popular with tourists, with locations proving to be traditional Irish hotspots
How it works: Download the app "GPSmyCity: Walks in 1K+ Cities" from iTunes App Store or Google Play to your mobile phone or tablet. The app turns your mobile device into a personal tour guide and its built-in GPS navigation functions guide you from one tour stop to next. The app works offline, so no data plan is needed when traveling abroad.

This traditional Irish pub is located on Aston Quay, the entrance to the Temple Bar area. A classic pub with a cozy atmosphere built around a Victorian style bar with comfortable seating that creates an old time feel. From every corner of the pub you have a good view of what is happening inside and outside. It is a wonderful place to rest and enjoy a good pint of ale after a long journey in the Temple Bar area.
Image by Suzy Q pix on Flickr under Creative Commons License.
2

2) National Wax Museum Plus (must see)

The National Wax Museum as it was then known was originally situated close to Parnell Square on the north side of the city. It was opened in 1983 by the Lord Mayor of Dublin and it was an exciting new addition to the city. In the past, it was a former site to prayer rooms converted into a cinema called Plaza Cinema and then into a waxworks, but this building was demolished to make way for a hotel.

The old Wax Museum in Granby Row had closed in 2005 and the site was to be redeveloped as the Maldron Hotel Parnell Square. In 2009 The museum which at this time had now changed it name to Wax Museum Plus found its new location in 4 Fosters Place, Temple Bar. Then on December 4, 2016 The Irish Stock Exchange had purchased the Foster’s Place location and The Wax Museum would then be relocated to the Lafayette Building in the centre of Dublin, more specifically 22–25 Westmoreland Street.

Why You Should Visit:
Firstly, most of the waxworks are terrible, but that's a major part of the charm, with the Oscar Wilde waxwork being a particular highlight.
Secondly, the museum's tonal shifts are genuinely bewildering – but once again, this is another part of its charm. Just don't expect Madame Tussauds!

Tip:
For the horror part, people under 16 should only go with an adult (as it says on the sign).


Image by cliff1066™ on Flickr under Creative Commons License.
3

This venue is designed in a traditional Irish fashion in a 19th century style with flagstone floors and a healthy amount of genuine artifacts throughout the pub. It pays tribute to notable Irish writers including Gogarty himself, James Joyce, Beckett and Behan. This cultural giant is a wonderful place for dining, shopping and fun! If you don't like traditional Irish music, you can go to second floor and enjoy current popular hits.
Image by We-Present: Travel-UggBoy-The-Photo grapher! on Flickr under Creative Commons License.
4

While you are in Dublin you will certainly visit the Temple Bar district, which is the hub of the city’s night-life. It’s pretty interesting during the day too and one of its attractions is The Wall of Fame.

It was created in 2005 from an idea by Becky Dunford of the Rockarchive Gallery, John McCormack of Exclusive Blinds and Dave Allen of the Temple Bar Music Centre. They decided to present an outdoor photo gallery featuring those artists they felt had made the greatest contribution to Irish music in the world. The Wall is lit up at night.

The Wall of Fame is a huge black wall with several sunken 6ft x 6ft “windows”, each with a photo in it. You will see Bono, lead singer of U2; Paul Brady, singer and writer of folk and pop songs; Rory Gallagher, a blues-rock songwriter and guitarist who died in 1995; Bob Geldof, the lead singer and songwriter of the Boomtown Rats, creator of Band Aid and Live Aid.

Other photos are of Luke Kelly, folk singer and founder of the Dubliners; Phil Lynott, founder and lead singer of Thin Lizzy; Shane McGowan, the singer and songwriter of the Celtic-punk band The Pogues; Christy Moore, the founding member of Planxty and Moving Hearts; Van Morrison, singer and songwriter of many genres of music; Sinead O’Connor, the pop-rock/folk-rock singer and priest; the Undertones, a punk rock/new wave band and U2, (who, incidentally have a 20ft by 20ft photo).
Image by infomatique on Flickr under Creative Commons License.
5

A popular club and live entertainment venue visited by both tourists and locals alike, Club Button Factory can be found in the heart of Dublin’s cultural hub, the Temple Bar district. Renovating the former space of the Temple Bar Music Centre into a more modern and appealing design, entertainment runs the gamut here to include anything from house, and hip hop, to indie, salsa, traditional Irish music, and more depending upon the night. Popular evenings found at Club Button Factory include Nighflight on Fridays playing funk, house, and techno, Transmission on Saturdays serving up great pop and indie music, and Thursday night Club NME playing rock, indie, and electro beats to get the crowd going on the dance floor.

Launched in 1995, The Ark is the first purposely organised European cultural centre wholly dedicated to innovative arts programming for, by, with, and about children. Set in the heart of Temple Bar, the centre contains an indoor theatre, an outdoor amphitheatre, gallery spaces and a workshop. The Ark occupies the site of the former Presbyterian Meeting House dated from 1728, and features the carefully restored front façade of the church.
Image by infomatique on Flickr under Creative Commons License.
7

The Gallery was opened in 1978 and has succeeded in becoming Ireland's premier venue for photography. It hosts contemporary exhibitions of many major names in photography. The Gallery moved to a new location in Meeting House Square in 1995. The Gallery belongs to the Arts Council and Dublin Corporation, but due to the rise in maintenance costs it is sustained financially by its members and sponsors.

The Porterhouse is a chain of pubs opened in 1996. This pub offers high quality beer with a strict philosophy to offer a diversity of good beers and wonderful music. This pub is endowed with Irish essence to the very bone. The owners of The Porterhouse helped create the Founding Charter of the Brewers and Masters Guild of Ireland. Porterhouse is as important to Dublin as beer is important to the Irish people.
Image by infomatique on Flickr under Creative Commons License.

This tour will give you a glimpse of Dublin's religious life. There are many churches located in the old town of Dublin, a place unaffected by the city’s radical modernization of the 1960s. They are the guardians of Dublin’s spiritual side as well as architectural history. Take this tour to familiarize yourself with some of the city’s most holy places.

Dublin at night is a buzzing Mecca of nightclubs, restaurants, bars, and night-time attractions. If you want to have an unforgettable night out, this walking tour is definitely what you need! We offer you a walk around the heart of the Irish capital, with stops at some of the most popular clubs and bars in this fascinating city.

Dubliners and the Irish in general are known for their passion for whiskey and beer. The Irish and the Scots are constantly at odds as to who makes the better whiskey and who could imagine St. Patrick's day without some famous Irish green beer ? Check out this amazing tour, that will guide you trough an area packed with pubs, and find out first hand what an Irish pub crawl means.

A Walk along Liffey River

Take a walk among the places where Irish history was made and is kept alive for the generations to come. This part of town is a place where the past meets the present and the future is defined. There is no better place in Ireland for a tourist to learn more about Irish culture and its rich, colorful history. Don't hesitate to spend a few hours exploring the banks of Liffey River in the...  view more

Check out this unique tour to learn about the lives of famous Irish writers, such as Oscar Wilde and James Joyce. You will visit places from their daily life, as well as monuments, museums, a birth place, and even a final resting place. Follow this tour and learn more about Dublin’s literary background.