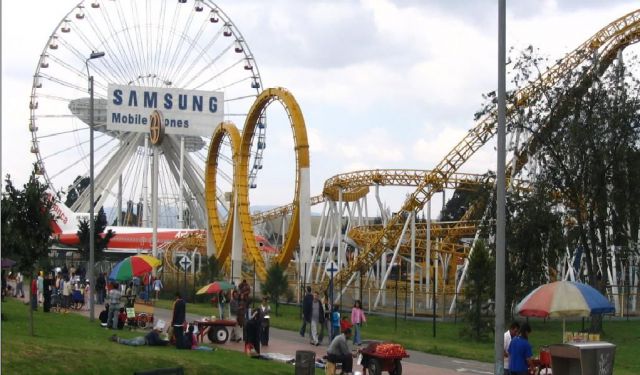 Image by Tequendamia on Wikimedia under Creative Commons License.

This tour can be rather surprising for someone living outside Latin America. If you want to expand you knowledge and impressions about what Bogota is like, please join us on our regional tour of Teusaquillo and enjoy alluring public gardens, famous landmarks and all the small, pretty sites in between them.
How it works: Download the app "GPSmyCity: Walks in 1K+ Cities" from iTunes App Store or Google Play to your mobile phone or tablet. The app turns your mobile device into a personal tour guide and its built-in GPS navigation functions guide you from one tour stop to next. The app works offline, so no data plan is needed when traveling abroad.

Galerias Commercial Center represents a big shopping center, where one can find anything from food and drinks to all sorts and brands of clothes and shoes. The center is quite popular among local youth for its small cafes and bars. It is located in the Teusaquillo district of Bogota.
Image by Ginny on Wikimedia under Creative Commons License.
2

Nemesio Camacho "El Campin" Stadium is the main stadium of Bogota, Colombia. It is the home ground of the Independiente Santa Fe and Millonarios association football teams. The name Campin comes from a modification of the word "camping" because the area where the stadium currently stands was formerly a camping zone. It entered service as a football stadium just in time to host the first national club tournament and also to host the Bolivarian Games of 1938. Its actual capacity is of 44.000 seated spectators. This stadium is one of the eight stadiums that will participate in the 2011 FIFA U-20 World Cup held in Colombia.
Image by Rafaflorez on Wikimedia under Creative Commons License.
Sight description based on wikipedia
3

The University City of Bogota (Spanish: Ciudad Universitaria de Bogota, CUB), also known as the White City (Spanish: Ciudad Blanca), is the flagship campus of the National University of Colombia system, located in the locality of Teusaquillo, in Bogota, Colombia. It is the largest campus in Colombia, with an extension of 1,200,000 m2 (300 acres) and a constructed area of 308,541 m2 (76.242 acres), making it an ample campus with several green areas, open spaces and pedestrian paths. Among its buildings there are 17 which have been declared national monuments and, as a whole, it is a representation of the last 60 years of architecture in Colombia.
Image by Rubashkyn on Wikimedia under Creative Commons License.
Sight description based on wikipedia
4

The Aquatic Complex Simon Bolivar is an important sports centre in Bogota. It is attached to Parque Metropolitano Simon Bolivar, next to Parque de Los Novios that integrates the structure through large windows facing the lake, which was one of the concepts used by architect Arias Serna Saravia. The complex comprises a diving pool five feet deep, an Olympic 50 m pool with a training area in the last half of the pool, and finally a children's pool.
Image by Rufino Uribe on Wikimedia under Creative Commons License.
5

Housed by a three-storeyed building, the public library "Virgilio Barco" is one of the most popular libraries among the residents of the adjacent regions. The library has a vast collection of books for all ages starting with preschool. It has all the up-to-date multimedia technologies. The territory of the library is very picturesque with many green zones and several cafes.
Image by jcbga on Wikimedia under Creative Commons License.
6

Equally loved by families and youth, Salitre Magico Amusement Park is the place where locals spend their leisure time. The park is famous for its carousels and for theme-days organized throughout the year. A joyful and cheerful atmosphere is guaranteed for each visitor.
Image by Elviper on Wikimedia under Creative Commons License.
7

The Bogota Botanical Garden, aka José Celestino Mutis Botanical Garden (Spanish: Jardin Botánico de Bogotá), is Colombia's biggest botanical garden, located in Bogotá. It features greenhouses in which plants from every Colombian region, altitude and climate are exhibited. Among other curiosities, it includes the biggest aquatic Amazonian flower and the Palma de cera, the Colombian national tree. The municipally owned park has an artificial waterfall and labs for studying plants and flowers. It also has public services such as a library and a tourist information desk.
Image by Philipp Weigell on Wikimedia under Creative Commons License.
Sight description based on wikipedia