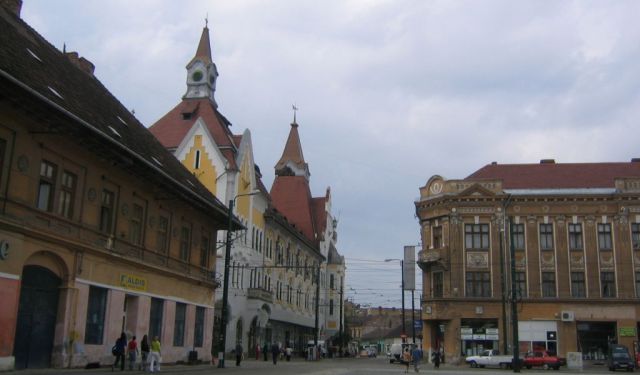 Image by Radu Trifan on Wikimedia under Creative Commons License.

The Fabric District of Timisoara (Self Guided), Timisoara

Fabric is a historical district in Timisoara. This district was well known for its factories,as the name implies. Fabric became the most populated district of Timisoara in the 19th century. Aside from being a multicultural neighbourhood, it is also a place with many historical monuments worth seeing. Take this tour and visit the most astonishing venues of Fabric.
How it works: Download the app "GPSmyCity: Walks in 1K+ Cities" from iTunes App Store or Google Play to your mobile phone or tablet. The app turns your mobile device into a personal tour guide and its built-in GPS navigation functions guide you from one tour stop to next. The app works offline, so no data plan is needed when traveling abroad.

Decebal Bridge, which connects the districts of Fabric and Cetate, was built in 1909 and it was the bridge on concrete beams with the greatest opening in Europe. The bridge is 195 meters long and 9 meters wide. The project obtained the Diploma of Honour at the International Exposition of Paris in 1910. The bridge is also known as Neptune Baths Bridge.
Image by Brunga on Wikimedia under Creative Commons License.
2

Queen Mary Park or Nation’s Park is the oldest park of Timisoara, located at the east boundary of the chain of parks surrounding the Bega Channel, towards Fabric district. In 1858, Timisoara’s governor, Cronin Cromberg, ordered the planting of trees, thus resulting in the beginning of the existence of this amazing park. It had many names over time - it was known as Coronini Park, Stadt Park, Queen Maria Park and Youth Park.
Image by law_keven on Flickr under Creative Commons License.
3

Neptune Public Bath, sometimes known as the Neptune Baths, is a building constructed between 1912 and 1914. The building was designed by architect László Székely. It was originally named "Hungaria" and was intended to replace the former Turkish baths in the Fabric district. The imposing building benefits of broad perspectives from the center and along the Bega canal. The Neptune Baths marks the beginning of the Fabric district.
Image by Radu Trifan on Wikimedia under Creative Commons License.
4

The Fabric New Synagogue is a Neologue synagogue in the Fabric quarter of the Romanian city of Timisoara, in the region of Banat. It was built when Timisoara was part of Transylvania and was integrated in the Austro-Hungarian Empire. The style is Neo-Moorish; it remains one of the most impressive buildings in the city. On September 3, 1889, the building we see today was inaugurated. Its construction was made possible by the contributions of donors, recruited by the head of the community, Alex Kohn. The building was designed by the well-known Hungarian architect Lipot Baumhorn, based in Budapest, and the construction itself was under the direction of local contractor Josef Kremmer. The synagogue's organ was built by a local master, Leopold Wegenstein. The reputation of the women's choir survives to this day.
Image by Radufan on Wikimedia under Creative Commons License.
Sight description based on wikipedia
5

The Millennium Church is located in the Fabric quarter of Timişoara, near the main Traian square.

The church was built in the Neo-Romanesque style by Lajos Ybl, the foundation-stone being placed in 1896. It was sanctified on 13th of October 1901 by Sándor Dessewffy.

The main towers are 65m high, the central cupola 45m, and the capacity is for 3,000 people. The bell was made by Antal Novotny. The altar-piece was painted by György Vastagh and its organ was made by Leopold Wegenstein.

Image by Zsolt Dudás on Wikimedia under Creative Commons License.
Sight description based on wikipedia
6

6) The Serb Orthodox Church (must see)

The Serb Orthodox Church is located in the Fabric district, Timisoara. It was built between 1745 and 1755, in Romanesque style. The church’s building was made of brick, and forms a visible cross both on the exterior and the interior. The walls within the church were painted by talented artists; in some of the paintings, one can observe the Byzantine-Serbian style. The church also boasts a collection of 100 religious books written in Slavic and even Greek, which date back to the 18th-19th centuries.
Image by Zsolt Dudás on Wikimedia under Creative Commons License.
7

Traian Square represents the center of the Fabric district. In the past, its name was Kossuth tér and Hauptplatz. It was designed by military engineers in 1740 in the center of Old Fabric; it is a smaller replica of Unirii Square (Piata Unirii). At this very spot were once hosted the daily market and the weekly fairs. “All of the good things come from Fabric”, is the phrase which characterized this zone in the 19th century.
Image by Radu Trifan on Wikimedia under Creative Commons License.
8

Timisoreana Beer Factory in Fabric is the first brewery on present Romanian territory. It was built by Prince Eugeniu de Savoya in 1718. The decision of its construction was made out of necessity for two reasons: the needs of Austrian troops and drinking water filling gaps. In 1890, a ferocious fire destroyed the factory’s main buildings and installations. The incident enabled a complete, high-caliber refurbishing of the factory, thus rendering it one of the most modern production units of beer in South East Europe.
Image by Radu Trifan on Wikimedia under Creative Commons License.