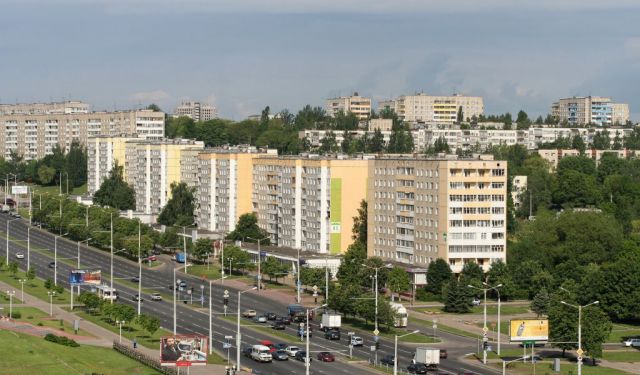 Image by Andrey Bondar on Wikimedia under Creative Commons License.

The Frunzensky District of Minsk (Self Guided), Minsk

The Frunzensky District is the largest of the nine districts of the city of Minsk. It was established on April 17, 1951, in connection with the rapid post-war development of the city. Today, it offers several fantastic spots and recreation options.
How it works: Download the app "GPSmyCity: Walks in 1K+ Cities" from iTunes App Store or Google Play to your mobile phone or tablet. The app turns your mobile device into a personal tour guide and its built-in GPS navigation functions guide you from one tour stop to next. The app works offline, so no data plan is needed when traveling abroad.

Kalvaryja is a Catholic Calvary cemetery. The cemetery contains a small Catholic chapel, which is currently used for general worship. The original wooden Catholic church dates back to 1673, while the oldest remaining grave dates back to 1808. The small chapel was built in 1839. Several famous Polish and Belarusian personalities from the 19th century were buried at Kalvaryja. In 2001, the cemetery became the center of a controversy when it was revealed that the state-run company responsible for taking care of the graves was quietly destroying old graves and selling the newly freed slots to the wealthy.
Image by Hanna Zelenko on Wikimedia under Creative Commons License.
Sight description based on wikipedia
2

2) Catholic Church of the Rise of the Holy Cross

The Catholic Church of the Rise of the Holy Cross was the only catholic religious sight during the Soviet Union. The church is surrounded by the Calvary cemetery. This famous monument was built in 1839 and initially was constructed of nothing more than wood until its restoration transformation to New-Gothic style in the 19th century.
Image by Hanna Zelenko on Wikimedia under Creative Commons License.
3

Aurora is one of the best cinemas in the Belarusian capital. Constructed in 1987, the Aurora is very attractive to visitors. The cinema provides two large halls (named Big and Azure), as well as comfortable seating, big screens, and quality sound. The cinema also offers its very own bar.
Image by www.chatoff.by under Creative Commons License.
4

The Minsk Ice Palace of Sports was erected in February of 1999 and is currently the largest in the country. Consequently, the Ice Palace has slowly transformed into the center of sports, entertainment, educational, as well as public events in the city of Minsk.
Image by Dr.frog on Wikimedia under Creative Commons License.
5

5) Orthodox Temple Complex in honor of the Mother of God

The Orthodox Temple Complex in honor of the Mother of God, also known as the "Joy of All Who Sorrow" was established in the '90s and has played an important role in the religious life of the city. The complex includes the temple, bell-yard, baptismal church of the patroness of Belarus Euphrosyne Polotski, a church shop, as well as a water spring.
Image by Testus on Wikimedia under Creative Commons License.
6

There is a beautiful park situated in the Frunzensky District of Minsk which is often simply referred to as the "Swamp," due to its large lake and pond. The park is a perfect place for relaxing and enjoy the nature in a harmonious atmosphere, far away from the city's noise and bustle.
Image by Hades on Wikimedia under Creative Commons License.
7

If you want to buy fresh and natural products, as well as clothes or souvenirs, Western Market is the one-stop shop for all your needs. While shopping at Western Market, make sure you also visit the sensational Market's café.

Image by NatalieMaynor on Flickr under Creative Commons License.

The religious life of Belarus has been strongly influenced by both the Orthodox and Catholic religions. Consequently, Minsk features several beautiful churches that are well worth your time and energy while in this fine city. Take a walk down Minsk religious sights today!

Minsk provides several important museums of interest. The doors are open and friendly to any visitor willing to learn more about this great city and its rich culture. Discover the unique collections and ancient artifacts of Minsk.