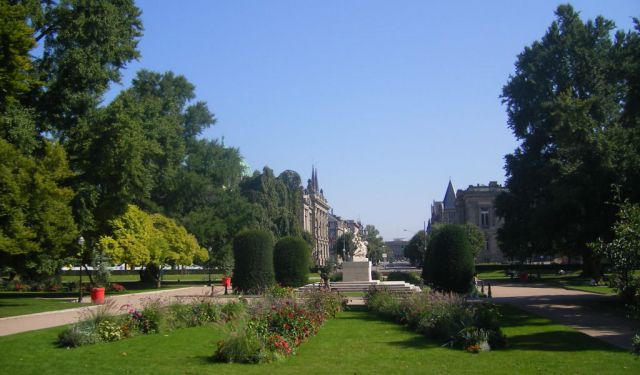 Image by Szeder László on Wikimedia under Creative Commons License.

Strasbourg's close proximity to the border of Germany is why German culture has influenced much of the social and cultural life of the city. This walking tour will lead you to some of the most visited sights of the German Quarter of Strasbourg.
How it works: Download the app "GPSmyCity: Walks in 1K+ Cities" from iTunes App Store or Google Play to your mobile phone or tablet. The app turns your mobile device into a personal tour guide and its built-in GPS navigation functions guide you from one tour stop to next. The app works offline, so no data plan is needed when traveling abroad.

1) Palace of the Rhine

The Palace of the Rhine is a monument to the best of 19th century Prussian architecture and one of Alsace’s best preserved examples of the German Neo-Classical style.

The architecture of this huge square building with its central dome was inspired by the Palazzo Pitti in Florence. It has extensive stables and stands in large, beautifully kept grounds.

The interior is as stunning as the exterior, with its frescoed dome in the Audience Hall, the delicately decorated vaulted ceiling in the main Ballroom and coffered ceilings in the other state rooms. The central staircase is magnificent in white marble with fountains and small ponds on each side of the stairs.

At the end of the Franco-Prussian War the newly installed German Government were faced with the problem of where to house the royal person should the emperor visit Strasbourg. The Imperial Palace was built on the Place de la Republique and inaugurated in 1889.

Between its opening and 1914 the emperor stayed there only a dozen times, which made the people complain about the cost of its construction. During the 1st World War the palace was used as a military hospital.

In 1920 it became the home of the Central Commission for Navigation on the Rhine (the CCNR), and its name changed from the Imperial Palace to the name it bears today. In 1923 part of it housed the Fine Arts and National Furniture of Alsace-Lorraine.

During the 2nd World War it became first the command base of the Nazi’s and then the general quarters of Leclerc’s army. It escaped demolition in the nineteen seventies; instead it was restored. The CCNR returned there and today it shares the premises with the Direction Régionale des Affaires Culturelles.


Image by Jonathan Martz on Wikimedia under Creative Commons License.
Sight description based on wikipedia
2

Place de la République is located in is located in the very heart of Strasbourg's "German quarter". The square is on the border between the historic city and the new one. It is surrounded on three sides by five buildings only, of which none is residential: the Parliament of Alsace-Lorraine (now the National Theater of Strasbourg), the Palace of the Emperor (now the Palais du Rhin) mixing different architectural styles (Italian Renaissance, Baroque, Classical), the National and University Library, the Préfecture of Grand Est and Bas-Rhin, and the tax center Hôtel des impôts. All of these buildings are classified as "monuments historiques".

Why You Should Visit:
To see one, if not the only, remaining example of fabulous German architecture in the world since all the stunning examples in Germany were destroyed in WWII.
Image by Grzegorz Jereczek on Wikimedia under Creative Commons License.
Sight description based on wikipedia
3

You will find the Bibliothèque Nationale et Universitaire on the Place de la Republique and even if you don’t want to borrow a book, don’t miss visiting this fine building.

The original municipal library housed priceless collections of manuscripts, but they along with the building were destroyed during the Franco-russe War. The BNU was built in 1872 to replace it.

The first administrator of the new library, Karl August Barrack, launched a massive international appeal for new books to fill the largely empty shelves. The response was immediate and by 1895 the library had received over a million books and manuscripts.

The task of sorting them was given to the professor and historian Roldolphe Reuss, while the building was being expanded by August Hartel and Skjold Neckelmann.

The building suffered damage during the 1st World War and was renovated in the early nineteen twenties by the French City council. At the beginning of the 2nd World War a lot of the collection was removed and hidden. Unfortunately because of the heavy bombing sustained by the city some of the hiding places and the books in them were destroyed.

The library was rebuilt in the nineteen fifties and today it houses over three million volumes, including 2300 incunabula, 6700 manuscripts and 5200 papyri.
Image by Jonathan M on Wikimedia under Creative Commons License.
Sight description based on wikipedia
4

If you are thinking of taking in a play while you are on holiday, you won’t regret booking your seats at the Strasbourg National Theatre.

This is the only national theater in Alsace and is housed in a massive building constructed for the Strasbourg Assembly in the Neo-Classical style in 1892 by August Hartel and Skjold Neckelmann on the Place de la Republique.

Within the building there are several theater rooms, a superior school of dramatic art, rehearsal rooms, the in-house company’s rooms, costume and set design workshops and administration offices.

During each season the theater puts on 15 plays and shows, one of which is by the theater´s in-house company and they co-produce three or four others. The rest are by visiting companies.

At the end of each season the theater hosts the Festivale Premières, presenting up to a dozen new contemporary shows by young up-and-coming European directors.
Image by Ji-Elle on Wikimedia under Creative Commons License.
Sight description based on wikipedia
5

Opened in November 2007, this museum is dedicated to the work of Strasbourg-born artist Tomi Ungerer and displays 8,000 graphic works of all kind by Ungerer and some of his most famous colleagues (Saul Steinberg, Ronald Searle, André François...) as well as Ungerer's large collection of ancient toys and regular, special exhibitions.

The anthem of France was once titled "War Song of the Army of the Rhine". In 1972, during a military parade in Paris, a group of volunteers standing along the streets of Marseilles began to sing it to the passing soldiers, prompting the name to be changed in honor of this event.
Image by francois on Wikimedia under Creative Commons License.
Sight description based on wikipedia
7

Strasbourg offers many wonderful sites to visit and you will be hard pressed to choose among them, but don’t miss Saint Paul’s Church which stands in Gothic Revival splendor on the south bank of an island in the center of the widest part of the River Ill.

This magnificent church was built in 1897 for the Lutheran congregation of the Imperial German Army who were billeted in Strasbourg. The graceful twin spires are 76 meters high and dominate the skyline.

If the church is wider than its length and has 19 separate entrances, it is because the army had a defined idea of what was due to each rank, so the portals were assigned from the Emperor – when he was in residence – to the generals down to the lowly foot soldiers.

The architect was Louis Muller and he based his designs loosely on the beautiful Elizabeth Church of Marburg, with the 3 huge ornate rose windows copied from the smaller one in St Thomas’ Church.

The building was damaged during the Anglo-American bombing in 1944, as were the stained glass windows. The windows suffered further damage during a terrible hailstorm in 1958 and the only remaining original ones are to be found along the nave and the eastern and southern rose windows.

Under the rose window in the eastern transept you will see the heraldic banners of Alsace, Baden, Bavaria, the Empire, Mecklenburg and Prussia. The pipe organ dates back to 1897 and is one of the biggest in Alsace.
Image by Richieman on Wikimedia under Creative Commons License.
Sight description based on wikipedia
8

When you visit the areas of the University Palace that is open to the public, you will surely wish that you could be a student here in this marvelous mixture of ancient and modern buildings.

The University, which is the largest in France, was founded in 1538 by Johannes Strum, a German educator who was responsible for establishing the German Gymnasium (the equivalent of a high school) in Alsace. The teachings in the Gymnasium were based on Lutheran Humanism.

The Gymnasium became a university in 1621 and ten years later it was raised to the status of Royal University. After the French Revolution most of the teachers were French and the curriculum was based on French university education.

These teachers fled during the Franco-Prussian War and in 1870 German teachers were installed and the university was reopened under the name of Kaiser Wilhelm. During the German rule the university was expanded many times to show off the superior German culture as opposed to the French.

In 1918 most of the German teachers left when Alsace was returned to France. During the 2nd World War the university was transferred to Clermont-Ferrand and the building briefly became the Reichsuniversität Strasburg before being restored to France in 1944.

In 1970 it was divided into three independent faculties: Louis Pasteur University, Marc Bloch University and Robert Schuman University. They remained separate until 2009 when they were reunited.
Image by AndreasPraefcke on Wikimedia under Creative Commons License.

Strasbourg is considered the daughter of the Rhine River. It is famous for its history, cathedrals, architecture and gastronomy. In this walking tour you will discover interesting historical sights. All attractions are located in the heart of Strasbourg and are easy to find.