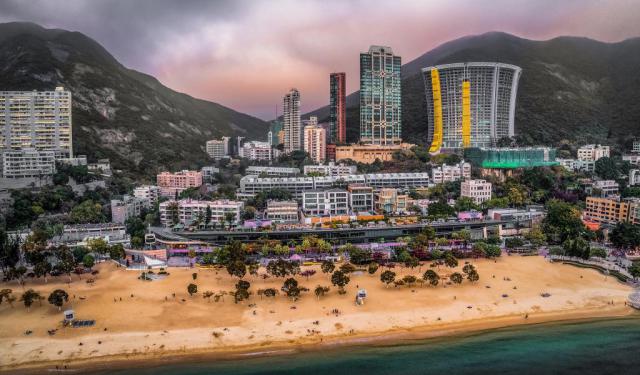 Image by Mark Lehmkuhler on Flickr under Creative Commons License.

Located on the southern shore of the Hong Kong island, next to Aberdeen Harbor, the Repulse Bay is famous for its clean beach. As of recently it has been rated one of the most expensive housing areas in Hong Kong. A walking tour around the Bay will take you far from the hustle of busy districts to the relaxing and quiet spots for a good time. Below are some of the nice places to see in the Repulse Bay area.
How it works: Download the app "GPSmyCity: Walks in 1K+ Cities" from iTunes App Store or Google Play to your mobile phone or tablet. The app turns your mobile device into a personal tour guide and its built-in GPS navigation functions guide you from one tour stop to next. The app works offline, so no data plan is needed when traveling abroad.

The Lily complex, designed by Sir Norman Foster, is considered to be one of the most striking samples of modern architecture. The building has received The International Property Award, as well as Five-Star High-rise Architecture award for Asia-Pacific. It is the first project of its kind in Hong Kong to be awarded this prestigious prizes. Each of the apartments in Lily complex offers an unforgettable panoramic ocean view. The Lily complex is one of the most desirable apartment locations in the city.
Image by Enoch Lau on Wikimedia under Creative Commons License.
2

The Repulse Bay is located in the southern end of Hong Kong Island. The bay area consists of a beach, and the Repulse Bay residential community, which was built on the former site of Hong Kong's famous Repulse Bay Hotel. The beach is a popular tourist destination in Hong Kong with visitors flocking its shores throughout the year.

The Repulse Bay Beach was made during the 1910s. The beach has been artificially extended and many attractions have been added over time to attract tourists. The climate of the region is temperate enough to attract visitors even in the middle of winter, as the temperature seldom drops below 15-20 degrees Celsius.

The Repulse Bay Hotel was a famous landmark in Hong Kong where many celebrities and royalty stayed. It was built in 1920 and became a favorite holiday spot for locals and tourists alike. Actor Marlon Brando and famous writers like Noel Coward and George Bernard Shaw were just a few amongst many celebrities who stayed at the hotel. Spain’s Crown Prince Juan Carlos and Princess Sofia also spent their honeymoon at the hotel. Among other royal guests here have been Prince Peter of Greece and Prince Axel of Denmark. In 1982, the Repulse Bay residential community was built at the site of the former hotel.

Why You Should Visit:
One of the most astounding landscapes where, on one side, you will find skyscrapers, and on the other side, the expansive sea views with sunsets as beautiful as you can see anywhere in the world.

Tip:
Find out the bus schedule and go by bus – it will be a fun trip.
From there, you can take the coastal walk to Deep Water Bay. If you wish to go further afield, you can walk on to Aberdeen. Along the way, you will see some of the attractions at Ocean Park in the not-too-far distance.


Image by Blue beach birds on Wikimedia under Creative Commons License.
Sight description based on wikipedia
3

The Beach has a temperate climate, and even in the months of November and December, it is balmy enough to allow sunbathing. During the summer months, the beach is packed with tourists, and usually, there is only room enough for standing.

The Repulse Bay was developed into a beach in the 1910s. During the 1920s, the Repulse Bay Hotel was built in order to attract tourists. The beach was artificially extended, and the sand that is close to the shore is different from that which is near the water. Until the 1960s, the construction of residential apartments was restricted, but Dr. P. P. Chiu and his brother constructed 3 blocks of six storey luxury apartments that overlook the bay.

Why You Should Visit:
Great for a few hours relaxing. Well-maintained beach with shingle sand at the top going down to soft sand at the water's edge. Perfect blue sea, with great views of the little islands dotted around.
Nice café and shops along the promenade; there are also a 7-eleven, play areas for kids and many public toilets and showers. Lifeguards always on duty.

Tip:
Can get crowded and make sure you pack beach mats and towels to sit on (if possible bring a beach umbrella if the sun is too hot).
Image by Enoch Lau on Wikimedia under Creative Commons License.
4

At the southern end of the Repulse Bay beach, a keen eye will be caught by a colorful site of the Buddhist temple, Kwun Yam Shrine. "Guarding" the shrine are two sizable statues of mercy goddesses believed to protect fishermen at sea. There are many other Chinese icons and sculptures in the shrine, making it a truly picturesque site.
Image by Deadkid dk on Wikimedia under Creative Commons License.
5

Longevity Bridge is a legendary site at the southern point of the Repulse Bay Beach. Designed as an element of the Kwun Yam Shrine complex it is set apart from the shrine itself. The Bridge is a small, yet colorful piece of architecture. The legend has it that anyone who crosses it will add 3 days to his life.
Image by Cris Campos on Flickr under Creative Commons License.