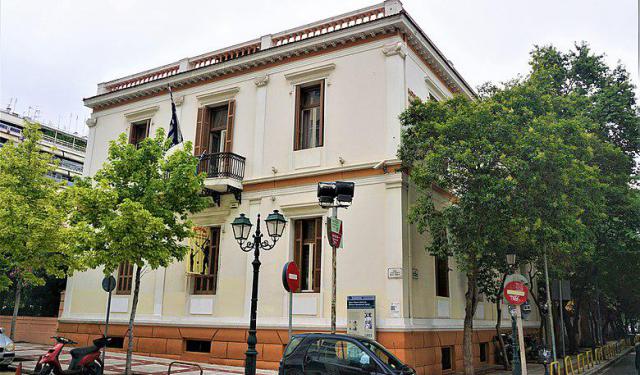 Image by Joyofmuseums on Wikimedia under Creative Commons License.

Thessaloniki's many museums give a complete picture of the city's rich culture and history. The most worthwhile museums are located in the area of Tsimiski Street. Here you can see prehistoric relics and treasures from the ancient Macedonian and medieval Byzantine eras in these museums. This self-guided tour will lead you to the museums that will reveal the antiquity of this land.
How it works: Download the app "GPSmyCity: Walks in 1K+ Cities" from iTunes App Store or Google Play to your mobile phone or tablet. The app turns your mobile device into a personal tour guide and its built-in GPS navigation functions guide you from one tour stop to next. The app works offline, so no data plan is needed when traveling abroad.

The Museum of Photography is located in a former warehouse in Thessaloniki's port area. Here, you can see a large collection of Greek photography. There are photos from the past and from the modern period. In addition to the permanent collections, there are also many temporary exhibitions. After walking through the museum, you can visit a nice coffee shop with an amazing view of the waterfront.

Image by Antonis Lamnatos on Flickr under Creative Commons License.
2

2) Museum of Cinematography (must see)

The Museum of Cinematography in Thessaloniki was established in 1997 and is housed in a historic building. The museum's aim is to preserve the artifacts of Greek Cinematography. Here you can see old film-making equipment and accessories, cameras, documentary films, theme magazines, and other artifacts recounting the history and the development of the national cinematography.

Image by tom.tziros on Flickr under Creative Commons License.
3

The Jewish Museum of Thessaloniki is a museum showing the history of Sephardic Jews and Jewish life in Thessaloniki.

It is also known as: "Museum of Jewish Presence in Thessaloniki", "Jewish History Museum".

The museum is being run by the Jewish Community of Thessaloniki.

Central to the first floor is a narrative history of the Jewish presence in Thessaloniki from the 3rd century BCE until the Second World War. A separate exhibit focuses on the Shoah, as it affected the Jewish Community of Thessaloniki. The majority of the community - some 49,000 persons - was systematically deported to Auschwitz and Bergen-Belsen where most of them perished.

The museum is a member of the Association of European Jewish Museums (AEJM).

Image by Lawrie Cate on Flickr under Creative Commons License.
Sight description based on wikipedia
4

4) Museum of the Macedonian Struggle (must see)

The Museum for the Macedonian Struggle occupies a neo-classical building designed by the renowned architect Ernst Ziller and built in 1893. In its six ground-floor rooms the museum graphically illustrates the modern and contemporary history of Greek Macedonia. It presents the social, economic, political and military developments that shaped the presence of Hellenism in the region.

Operating hours: Monday-Friday : 9 am - 2 pm;Wednesday until 8 pm; Saturday: 10 am – 2 pm.
Image by Ωριγένης on Wikimedia under Creative Commons License.
Sight description based on wikipedia
5

5) White Tower of Thessaloniki (must see)

The tower has been altered substantially over the years. Early illustrations show that it was originally covered by a conical roof, like similar towers in the Yedikule Fortress and Rumelihisarı fortress in Istanbul.
Image by Ωριγένης on Wikimedia under Creative Commons License.
Sight description based on wikipedia
6

6) Archaeological Museum of Thessaloniki (must see)

The Archaeological Museum of Thessaloniki stores findings from the Archaic, Classical, Hellenistic, and Roman periods, excavated within the city and the surrounding region of Macedonia. The museum is housed in a building designed by architect Patroklos Karantinos, an example of modern Greek architectural trend. The museum's new wing hosts two exhibitions, "The Gold of Macedonia," featuring findings from the cemeteries of Sindos, Agia Paraskevi, Nea Filadelfia, Makrygialos, Derveni, Lete, Serres, and Evropos; and "The Thessaloniki Area in Prehistory," with findings from prehistoric settlements dating from the Neolithic to the Late Bronze Age.

7) Museum of Byzantine Culture (must see)

The Museum of Byzantine Culture opened in 1994.

To design the museum, a nationwide architectural competition was announced in 1977. The competition was ultimately won by the entry of Kyriakos Krokos. Construction of the building began in March 1989, and was completed in October 1993. Antiquities from the Byzantine & Christian Museum in Athens were transferred in June 1994, some of them being displayed in the museum's inaugural exhibition, "Byzantine Treasures of Thessaloniki: The Return Journey".