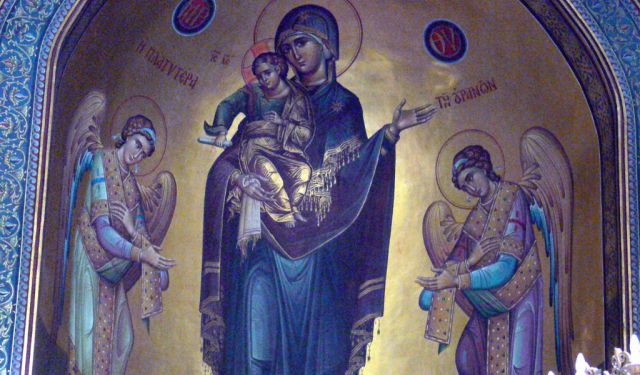 Image by Fingalo on Wikimedia under Creative Commons License.

Thessaloniki is an old city with a rich Christian history. Some of the twelve apostles visited the city and wrote epistles to its people, which entered the cannon of New Testament. There are many great ancient churches here, but of special interest are the beautiful smaller ones. This self-guided tour will lead you to the most splendid churches of the city.
How it works: Download the app "GPSmyCity: Walks in 1K+ Cities" from iTunes App Store or Google Play to your mobile phone or tablet. The app turns your mobile device into a personal tour guide and its built-in GPS navigation functions guide you from one tour stop to next. The app works offline, so no data plan is needed when traveling abroad.

The Metropolitan Church of Thessaloniki is dedicated to one of the most significant saints in the Orthodox history, Saint Gregory Palamas, who was The Archbishop of Thessaloniki. The relics of the saint are kept in this church. It is a beautiful old church topped by red domes and decorated inside with traditional mosaics and paintings.
Image by Ωριγένης on Wikimedia under Creative Commons License.
2

The Hagia Sophia (Holy Wisdom) is one of the oldest churches in the city still standing today. The present church was erected in the 8th century, based on the plan of the Hagia Sophia in Constantinople. Its ground plan is that of a domed Greek-cross basilica. It is one of the main architectural examples of this type, typical of the Byzantine middle period. The mosaic in the dome represents the Ascension of Jesus Christ. The dome is ringed by the figures of all Twelve Apostles, the Virgin Mary, and two angels. Hagia Sophia is part of the group of Palaeochristian and Byzantine Monuments of Thessaloniki that comprise a UNESCO World Heritage Site.
Image by Adderbak on Wikimedia under Creative Commons License.
Sight description based on wikipedia
3

3) Church of the Acheiropoietos (must see)

The Church of the Acheiropoietos is a 5th-century Byzantine church. It is another part of the Palaeochristian and Byzantine UNESCO World Heritage Site. The Acheiropoietos has been dated from its bricks and mosaics to AD 450–470, making it perhaps the oldest of the city's surviving churches. It is dedicated to the Virgin Mary. Its current name is first attested in 1320, presumably after a miraculous acheiropoietos ("not made by hands") icon of Panagia Hodegetria that was housed there. The building is a three-aisled basilica, with a wooden roof. The surviving parts of the church's rich original interior decor include the particularly fine 5th-century Ionian capitals from a Constantinopolitan workshop, the green Thessalian marble columns of the tribelon, the original Proconnesian marble pavement of the central nave, and fragments of the 5th-century decorative mosaics.
Image by Joyofmuseums on Wikimedia under Creative Commons License.
Sight description based on wikipedia
4

The Church of Panagia Chalkeon is an 11th-century Byzantine church. According to the founder's inscription above the west entrance, the church was built in 1028 by the protospatharios Christopher and his family. The ground plan is that of a classic "cross-in-square-form" typical of Macedonian-period architecture, with four columns and three domes. The entire building is built of bricks, which gave it the popular nickname "the Red Church." The exterior is enlivened with a variety of arches and pilasters, elements which can be traced to Constantinopolitan influence. The use of arches with several setbacks gives the building a "sculpted" appearance. In the interior, most of the carved marble decoration, as well as frescoes from the 11th and 14th centuries, have been preserved.
Image by Konstantinos Stampoulis on Wikimedia under Creative Commons License.
Sight description based on wikipedia
5

5) Church of Saint Demetrius (must see)

The Church of Saint Demetrius is the main sanctuary dedicated to the patron saint of Thessaloniki, dating from a time when it was the second largest city of the Byzantine Empire. It is part of the group of Palaeochristian and Byzantine Monuments of Thessaloniki added to the list of UNESCO World Heritage Sites in 1988. The basilica is famous for the six extant mosaic panels, dated to the period between the latest reconstruction and the inauguration of the Iconoclastic policies in AD 730. These mosaics are the rare examples of art survived the Dark Age following the death of Byzantine Emperor Justinian in AD 565. Archaeological excavations conducted in the 1930s and 1940s revealed interesting artifacts that may be seen in a museum situated inside the church's crypt.
Image by JFKennedy on Wikimedia under Creative Commons License.
Sight description based on wikipedia
6

The Church of Prophetes Elias is a monastic building set near the part of the city surrounded by the Byzantine Walls. Domes cover the church and its chapels. Inside the church you will see surviving wall paintings. In the past it was the Monastery of Akapnios, dedicated to Christ. After the Turkish conquest, the church was transformed into a mosque; later, it again became a place of Christian worship. This old church is a historic monument of Thessaloniki. Archaeological excavations were performed here between 1987 and 1991.
Image by Marsyas on Wikimedia under Creative Commons License.
7

7) Church of Aghioi Apostoloi (the Holy Apostles) (must see)

The Church of the Holy Apostles is a 14th-century Byzantine church.

As evidenced by remnants of a column to the south of the church and a cistern to its northwest, it originally formed part of a larger complex. Consequently it appears that the church was originally built as the katholikon of a monastery.

A depiction of the hegumenos Paul kneeling before the Virgin Mary, as well as a series of Marian scenes lead to the conclusion that the church was dedicated to the Virgin, perhaps to be identified with the Monastery of Theotokos Gorgoepikoos.

The building belongs to the type of the composite, five-domed cross-in-square churches, with four supporting columns. The exterior walls feature rich decoration with a variety of brick-work patterns.

The interior decoration consists of rich mosaics on the upper levels, inspired by Constantinopolitan models. Frescoes complete the decoration on the lower levels of the main church, but also on the narthex and one of the chapels.

As was their usual practice, the Ottomans covered the mosaics and frescoes with plaster, after they removed the gold tesserae. The church's modern name, "Holy Apostles", was not attributed to the building until the 19th century.


Image by Jojojoe on Wikimedia under Creative Commons License.
Sight description based on wikipedia