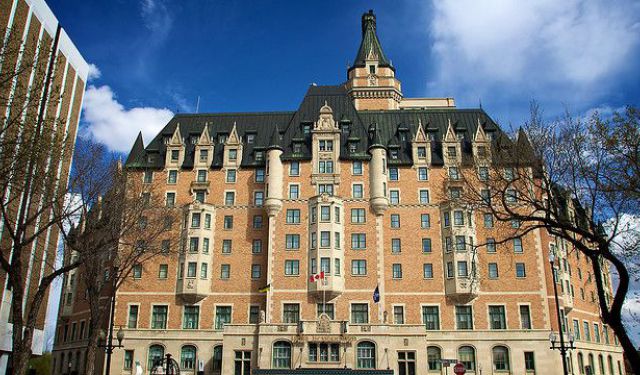 Saskatoon is decorated by many historically and architecturally important buildings that exemplify different styles. In particular, visitors have the opportunity to see the examples of Chateau, Classical Revival, Neo-Renaissance, Neo-classical and Collegiate Gothic architectural styles. Take this tour guide to admire the most important architectural sights of Saskatoon.
Image Courtesy of Flickr and D'Arcy Norman.
How it works: Download the app "GPSmyCity: Walks in 1K+ Cities" from iTunes App Store or Google Play to your mobile phone or tablet. The app turns your mobile device into a personal tour guide and its built-in GPS navigation functions guide you from one tour stop to next. The app works offline, so no data plan is needed when traveling abroad.

The city of Saskatoon is served by Via Rail's The Canadian service, however it now calls at the New Saskatoon Railway Station located southeast of the downtown core. Saskatoon's CP station is located at 305 Idylwyld Drive, in the Caswell Hill Neighborhood, Core Neighbourhoods Suburban Development Area. The CP station has not been used as a rail station for many years, and currently houses several businesses. Received the 1995 SAHS (Saskatchewan Architectural Heritage Society) Heritage Architecture Excellence Awards which was bestowed by Saskatchewan’s Lieutenant-Governor.

Image Courtesy of Wikimedia and Julia Adamson.
Sight description based on Wikipedia.
2

Canadian Fairbanks Company built the structure in 1911 as a warehouse for its large machinery and mill supply business. It was designed by David Brown and Hugh Vallance of Montreal. It was built with reinforced concrete, uncommon at that time. From 1948 until 1985 the Fairbanks-Morse Warehouse served as the home to the Co-operative Commonwealth Federation and as a union hall. The building had CPR spur line until the mid-1960s, when much of the downtown was redeveloped. It changed hands several times, serving as a warehouse, offices, photography studio and art gallery. Some tenants of note include AKA Gallery, The Photographers Gallery and Video Vérité (of which the latter two would merge to become PAVED Arts).

Image Courtesy of Wikimedia and Julia Adamson.
Sight description based on Wikipedia.
3

In 1970, Eaton's relocated its store to the nearby Midtown Plaza. Serving briefly as athlete housing for the 1971 Canada Winter Games, the building was subsequently occupied from 1973 to 2000 by an outlet of the Army & Navy discount department store.

Image Courtesy of Wikimedia and Julia Adamson.
Sight description based on Wikipedia.
4

The Land Titles Building is located at 311 21st Street East in the Central Business District of Saskatoon. The architectural firm of Storey and Van Egmond designed the building in the Romanesque Revival style. The building was constructed by Smith Brothers and Wilson in 1909. Additional expansions were done between 1910 and 1912. The building housed the land title office until 1959 when the office was transferred to the Law Courts Building. The provincial government stopped using the building when it was sold in 1994. The building now houses the law offices of Brayford and Shapiro.
Image Courtesy of Wikimedia and Julia Adamson.
Sight description based on Wikipedia.
5

William Charles Sutherland, Fred Engen, F. S. Cahill, H. L. Jordan and James Straton were the first members of the Executive Committee for the Saskatoon Club. By 1909 the club had moved into the MacBeth Block before moving into the current club building in 1912. The current building was designed by Norman Thompson from the firm of Thomson, Daniel and Colthurst. The structure was constructed at the cost of $5000 CDN in February 1911.
Image Courtesy of Wikimedia and Julia Adamson.
Sight description based on Wikipedia.
6

The Delta Bessborough Hotel has 225 guest rooms, numerous meeting facilities and function rooms, two restaurants, a lounge, a pool, a fitness facility and 5 acres (20,000 m2) of private waterfront gardens backing onto the river in downtown Saskatoon. The gardens are used to host large functions - they are commonly used for weddings, business barbecues, retirement parties, concerts, and as a venue for the Sasktel Saskatchewan Jazz Fest. It hosted the Police and Fire Can-Am games in the summer of 2008.
Image Courtesy of Wikimedia and Drm310.
Sight description based on Wikipedia.
7

The Arrand Block is a historic building located in the Nutana neighborhood of Saskatoon. The building was built by James and Walter T. Arrand, owners of the James and Walter T. Arrand Contractors' Company. Original features of the building include two story apartments, with sky lights on the top floor. The building was designated a heritage property on April 10, 1989.
Image Courtesy of Wikimedia and Drm310.
Sight description based on Wikipedia.
8

The Albert School is a brick building established in 1912 in a green area. The Collegiate Gothic architectural building includes a tower, many arched mullioned windows, two central entrances and other original details. The structure is made of limestone allowing the creation of massive symmetrical shapes. The school got its name from Prince Albert, which gives it historical value. Another important detail is the gorgeous location of the Albert School.
Image Courtesy of Wikimedia and Drm310.