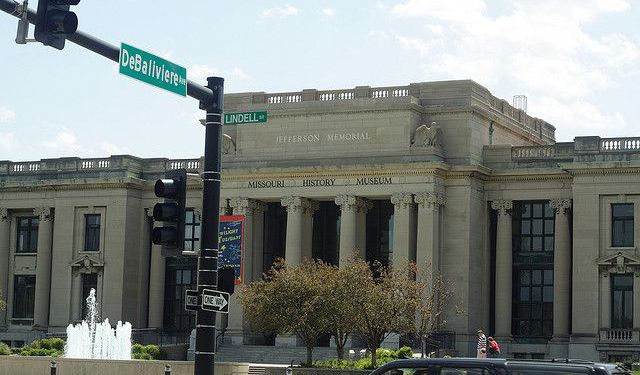 Amid an array of diverse cultural attractions fit to delight any tourist in Saint Louis, museums are among the most prominent. If you're an American history buff or have a keen interest in military or architecture, you can discover much to your liking, as well as learn a great deal about the city's past and present by visiting the Museum of Westward Expansion, the City Museum, the Soldiers' Memorial and more. Take this self-guided walk to tour the most popular museums of Saint Louis.
Image Courtesy of Flickr and Matthew Black.
How it works: Download the app "GPSmyCity: Walks in 1K+ Cities" from iTunes App Store or Google Play to your mobile phone or tablet. The app turns your mobile device into a personal tour guide and its built-in GPS navigation functions guide you from one tour stop to next. The app works offline, so no data plan is needed when traveling abroad.


Image Courtesy of Flickr and Chris Yunker.
Sight description based on Wikipedia.
2

The Museum of Westward Expansion, located at the base of the Gateway Arch, recounts the history of America's expansion toward the West. It houses some truly outstanding artifacts from the Lewis and Clark period. Here you can learn much about the life and customs of the American Indians and other most interesting facts.

Why You Should Visit:
A nice balance of types of exhibits: big, small, interactive, simple, complex...
Rather than simply glorifying the westward expansion as an achievement, the exhibits pay great respect to native Americans, Mexicans, slaves, women, and others who were not always treated well.

The Eugene Field House and St. Louis Toy Museum is the place of birth of renowned American writer, Eugene Field. On display here are personal belongings of the writer and his father, Roswell Field. The latter served as an attorney for the Scott slave couple in 1853 when they appealed to the federal court for their freedom. The refusal of the United States Supreme Court to treat Dred Scott and his wife, Harriet, as citizens is believed by many to be a factor that precipitated the American Civil War.

Among other artifacts presented at the Field House & Museum are the restored original furniture, photographs, and a papercraft exhibition. The museum also contains a vast collection of toys and dolls with the oldest one dating back to 1790.